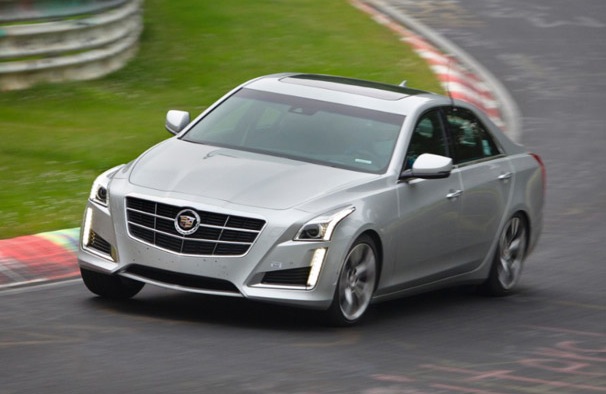 The new 2014 Cadillac CTS Vsport has set an impressive time of 8:14 around the Nurburgring in Germany, overshadowing a number of much more powerful V8 performance sedans on the market.

As we know, the 2014 Cadillac CTS Vsport features GM’s new 3.6-litre twin-turbo V6 engine which churns out a highly respectable 313kW of power and a whopping 583Nm of torque. It’s not quite the replacement to the previous CTS-V supercharged V8 muscle sedan, but even still, these are some very exciting figures.

Despite being slightly up on power compared with the first generation CTS-V, which offered 298kW from a 5.7-litre V8, the new model is five seconds quicker around the famous ‘Green Hell’ than the first-gen CTS-V. Dave Leone, CTS executive chief engineer at Performance Luxury Vehicles division, recently said,

“The Nurburgring’s extreme conditions allow us to push cars to the limits of stability, steering, braking, ride and handling. The new CTS models had a lot to live up to considering the nameplate’s history of outstanding performance, and we were not disappointed.”

The new CTS is larger than its predecessor, however, it is lighter in weight. The Vsport version is also only a step up from the regular V6, leaving the door open for a new, even more serious high performance CTS-V.

Although the Cadillac isn’t officially available in Australia at the moment, the new 3.6 twin-turbo V6 engine may eventually make its way Down Under for a future Holden product.

With advanced features such as a top-mounted throttle body and short intercooler piping to reduce lag, the engine passes various strict emissions laws. It seems only natural that Holden could eventually adopt it some time down the track.