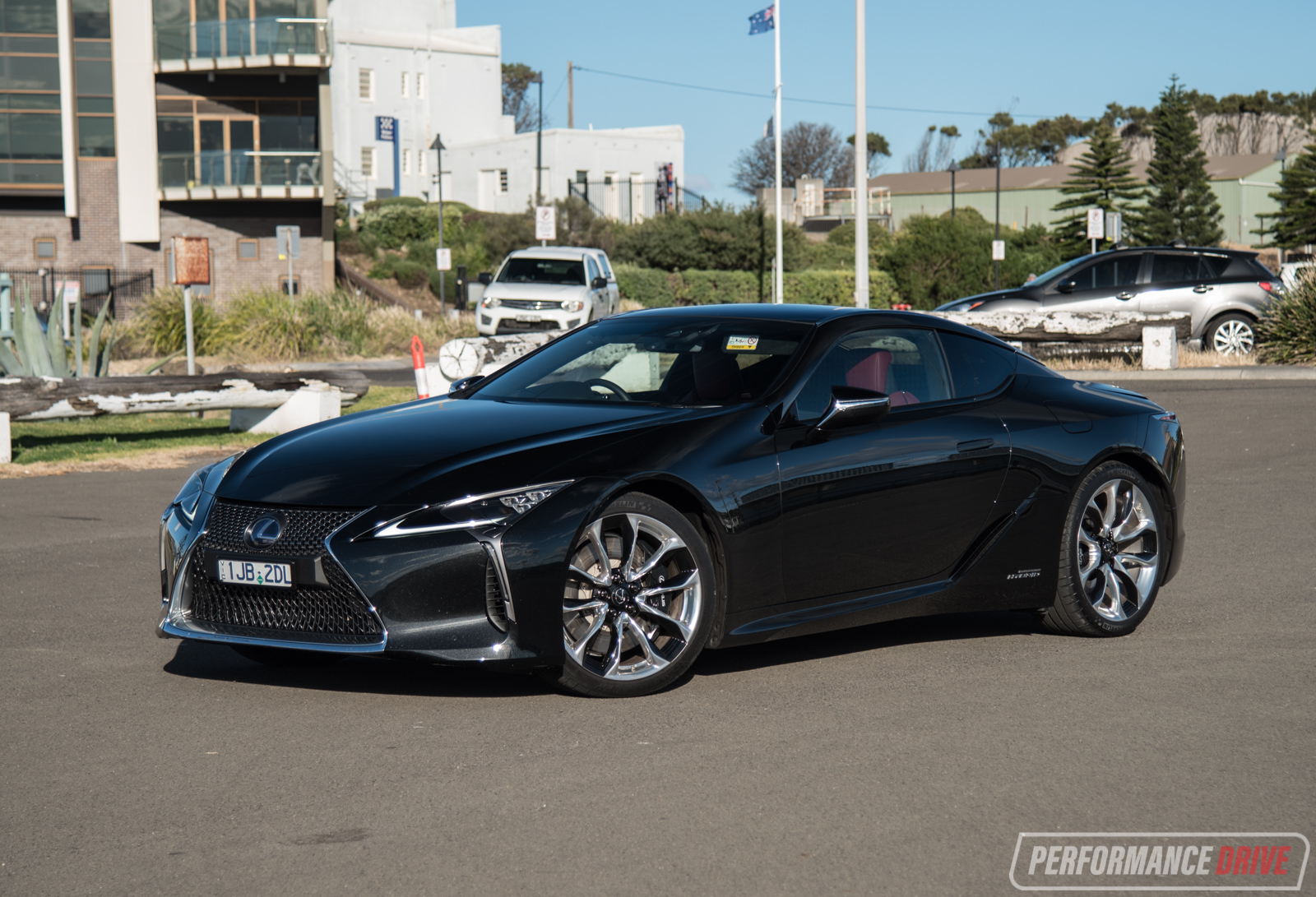 It only happens once every few years. A car that stands out and really challenges the market. We saw it with the Toyota 86 back in 2012, the Bugatti Veyron in 2005, and even the original WRX in 1992. We have a strong feeling the new Lexus LC has become one of those standout cars. 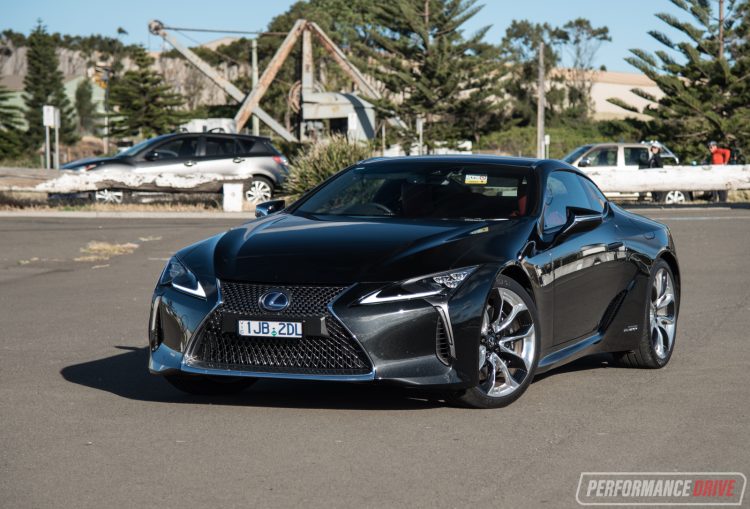 Lexus is the pioneer of hybrid technology in the automotive industry, so it’s only natural that it should offer it with its latest flagship coupe, no matter how stunning and downright sexy it looks. That’s what we’re testing here. It’s called the LC 500h and it showcases Toyota’s next step in hybrid technology evolution.

Buyers can also opt for a V8 model, called the LC 500, which comes with a 5.0-litre naturally aspirated V8 taken from the GS F and RC F. It produces 351kW and is paired to a Lexus-first 10-speed automatic. This hybrid is powered by a 3.5-litre ‘8GR’ V6 and electric motor system, with a combined output of 264kW. This is also sent through a 10-speed auto… sort of. It’s actually more like a 14-speed auto. More on that below.

Prices start at $190,000 in Australia (excluding on-roads) for either the V8 or hybrid version. This seems to indicate Lexus is not putting one in front of the other in terms of value or overall appeal. 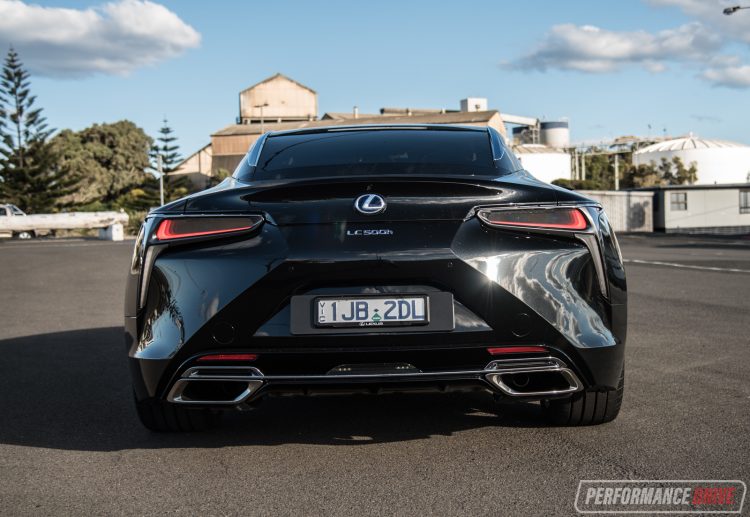 If, like us, you’re drawn to the stunning exterior, you’ll need to prepare yourself for the interior. It’s just as breathtaking. Lexus has obviously worked very hard at forging a new standard for its interiors, and indeed a new standard in luxury car interiors in general. This is the best Lexus interior ever created in our opinion.

Aside from the impeccable attention to detail, the beautifully-crafted fixtures and controls, and the exceptional build quality Lexus is renowned for, the new LC simply feels expensive. There’s a real aura of prestige in here. You can immediately tell this is not just another luxury car interior. Audi, BMW and Mercedes-Benz cabins are utterly boring in comparison.

Most cabins are fairly straight-forward, not this though. It’s a work of art. Take a look at the door trims, contrasted by a sweeping wave of Alcantra, red in the case of this test car (other colours available), and then the titanium-look door handle that sprouts out from nowhere. Who said a door handle had to be encased in some special plastic cove? This is what we think makes the LC’s cabin so attractive, the fact that it doesn’t follow tradition yet it’s still functional and familiar. 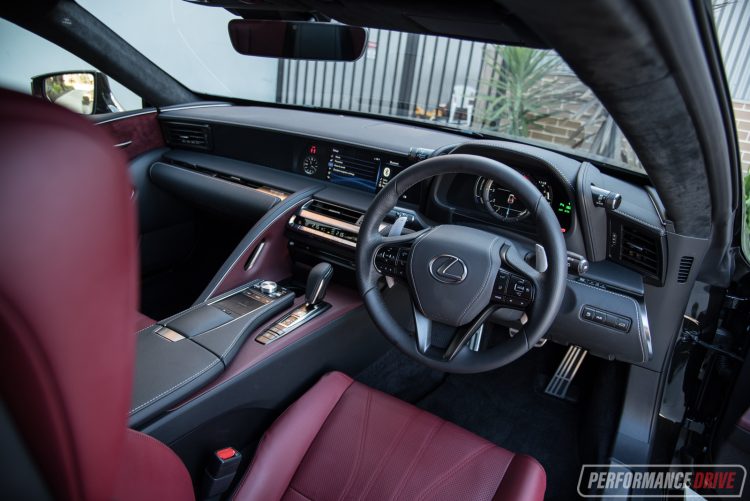 We’re not a fan of the touch-pad control system for the wide-screen LCD interface. Sure, it’s very advanced and has that wow-factor, but the operation and practicality side of it can be fidgety and somewhat distracting for the driver. We prefer the simple button and rotary controller that’s applied in most German rivals, and also seen with Mazda’s MZD Connect.

Every button feels nice to touch, particularly the volume knob which we swear has hydraulic damping or something involved; it feels so smooth. The climate control toggles depress softly, and the drive mode twist-switch up next to the instrument cluster feels like a lot of work went into developing and building it.

As for the passenger space, this is a grand touring luxury coupe so you shouldn’t expect SUV accommodation in here. But it is totally adequate in the front, with good legroom and decent headroom thanks to the seat’s extensive adjustment potential for height and length. Rear seat space is not so impressive. The seat support for the legs is nice and long, but this just pushes them further forward and into the front seats. Unless the front seats are positioned forward there isn’t much room in the back for adults, and only just for children.

Boot space is rated at a pretty tight 172 litres for this hybrid, and 197L for the V8. The difference is due to the location of Lexus’s all-new lithium-ion battery pack right behind the rear seat. Boot reach and width is okay, but the floor depth isn’t so good. 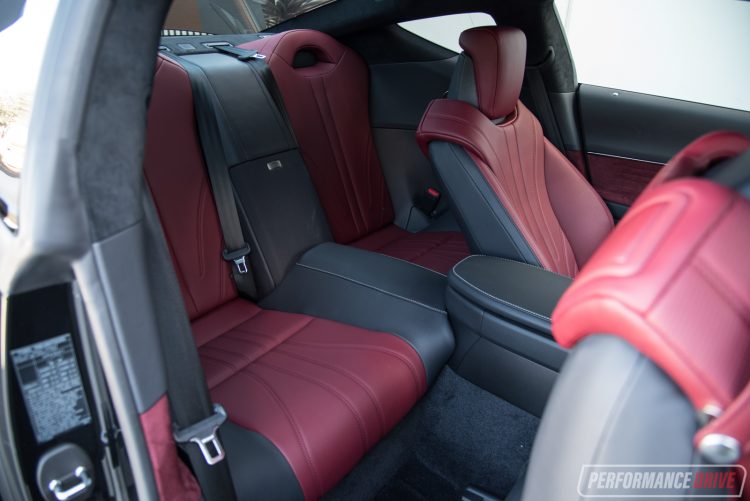 As amazing as the exterior and the interior are, the drive is actually just as awe-inspiring. Whether you’re getting up it in the bends and pushing the hybrid to the max, or just cruising around the city, we think the new LC is Lexus’s most rewarding and nicest vehicle to drive. Let us explain.

Power comes from a hybrid system. But before you commence yawning, you need to know this is not like any other hybrid that Lexus or Toyota have built before. Sure, the 3.5-litre naturally aspirated V6 is based on the original 2GR unit found in many other Toyota and Lexus models, it is the latest specification known as the 8GR. This comes with the advanced D-4S direct and port injection system along with simulated on-demand Atkinson cycle. It also uses a very high compression ratio of 13.0:1, producing an impressive 220kW alone.

The V6 is combined with a new electric motor system powered by a Lexus-first lithium-ion battery pack. It replaces the previous nickel-based battery and is constructed using a satellite design to help with packaging. Adopting lithium-ion helps to cut weight by around 20 per cent over the equivalent older setup, while also being more compact. Overall this helps with the centre of gravity and handling balance, and of course fuel economy.

This is all well and good but how does it enhance the driving experience? Lexus’s chief engineer of the LC said a few interesting words at the launch. Koji Sato explained: “In the past, people only associated hybrid with ‘eco’. We wanted to broaden that perception and create a true high-performance powertrain.”

It’s difficult for us to admit this but the LC 500h’s hybrid powertrain does feel very sporty. It’s powerful and really pushes you back into your seat. The engine note enhances sporty driving too, even if some amplified noise is coming through the speakers. Of course we would rather just hear the naturally aspirated V6 singing its song, but wherever the sound is coming from, the note is addictive and attractive. From the outside there is a trademark V6 howl. 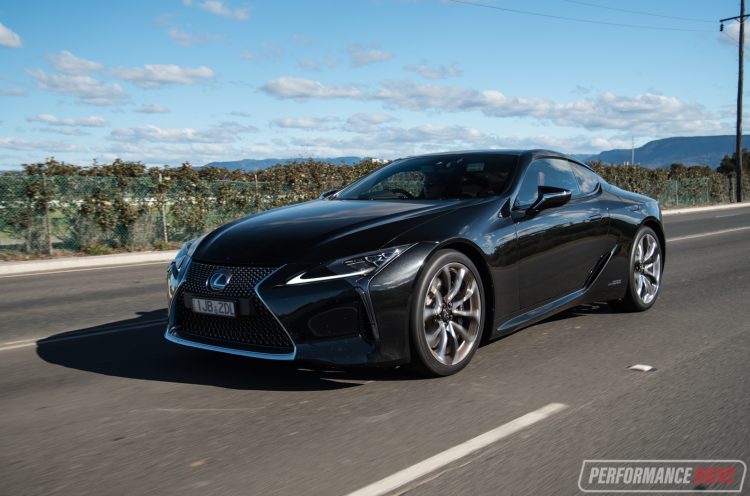 Syncing with this system is another ‘all-new’; the hybrid transmission. This is a first for a production passenger car. It combines a conventional four-speed automatic with an artificially-geared 10-speed CVT. It sounds complex but out on the road it flows from ratio to ratio, supporting both urgent acceleration and excellent cruising economy. It’s able to do this thanks to, essentially, 14 different ratios to divide up the engine’s power and torque. When you’re cruising the engine revs will drop right down and the electric motor is relied on to provide torque. However, put your foot down and it will step through gears, very quickly we might add, just like a normal sports car.

In terms of the measured performance figures we clocked a best 0-100km/h time of 5.56 seconds, which is shy of Lexus’s 5.0-second claim. Top end power is impressive though, with the quarter mile requiring 14 seconds flat. This gives you an indication of the LC 500h’s cross country ability. It doesn’t get off the line as suddenly as some vehicles in this class, but for the rest of the thrust range it is very enjoyable.

Thanks to the electric motor, there is plenty of low-down torque in between gears – it kind of behaves like a modern turbocharged car. You get a gratifying surge at low revs, making the car feel quick even in normal conditions. For example, you can apply only half or quarter throttle and it picks up speed very quickly and effortlessly, which is perfect for this style of luxury vehicle. It’s swift without trying. 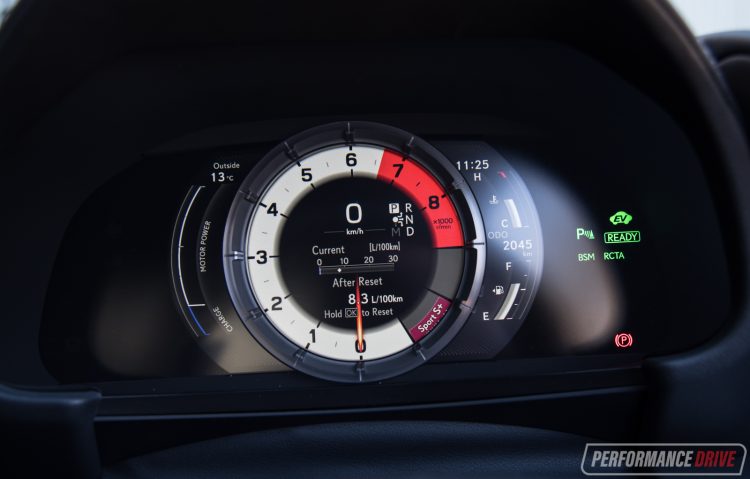 The best part about the drive experience in our opinion is the handling. This is such a pleasant, feel-good car to drive, we’d say it’s the best Lexus we’ve ever tested. The steering feel is divine, with perfect weight and very linear gearing. Out on the highway it’s centred and doesn’t wander around, giving the car a reassuring solidity. It’s also exceptionally smooth, falling exactly in line with what a Lexus should feel like.

If you up the pace none of this changes. It actually feels all too easy for the LC and we put this down to the high rigidity and dynamic prowess of the all-new Lexus GA-L platform (global architecture – luxury). In fact, the platform provides such extraordinarily solid and secure road-holding, it feels like it could handle 700hp with ease. The almost-2000kg kerb weight seems to disappear too, leaving a fun and almost playful character that’s not overly delicate. The suspension’s absorption ability is outstanding, providing both comfort and compliance in all conditions.

We’ll be testing the V8 version soon. Whether that will be more enjoyable we’ll have to wait and see. But in hybrid form this new coupe is extremely well balanced and encouraging, yet calming and relaxed enough to pass all luxury car criteria. We’re confident the platform could handle heaps more power as we said; it’s that well sorted. And if Lexus decides to go ahead with a proper ‘F’ model potentially using a twin-turbo V8, we’d dare say it would come in as one of the best driver’s cars of this time.

Lexus has created a benchmark-breaking luxury coupe with the new LC. It snaps all conventions in terms of automotive design, function, and preconceived hybrid mentality, making it one of the most attractive and aesthetically acclaimed vehicles on the market, let alone in its class. The Japanese company has done an excellent job evolving its hybrid technology, and, perhaps most importantly, it is a genuine luxury car with genuine luxury appeal; it’s gentle, soothing and thoroughly relaxing to drive. It feels, looks, and goes very nicely indeed. Well done, Lexus.