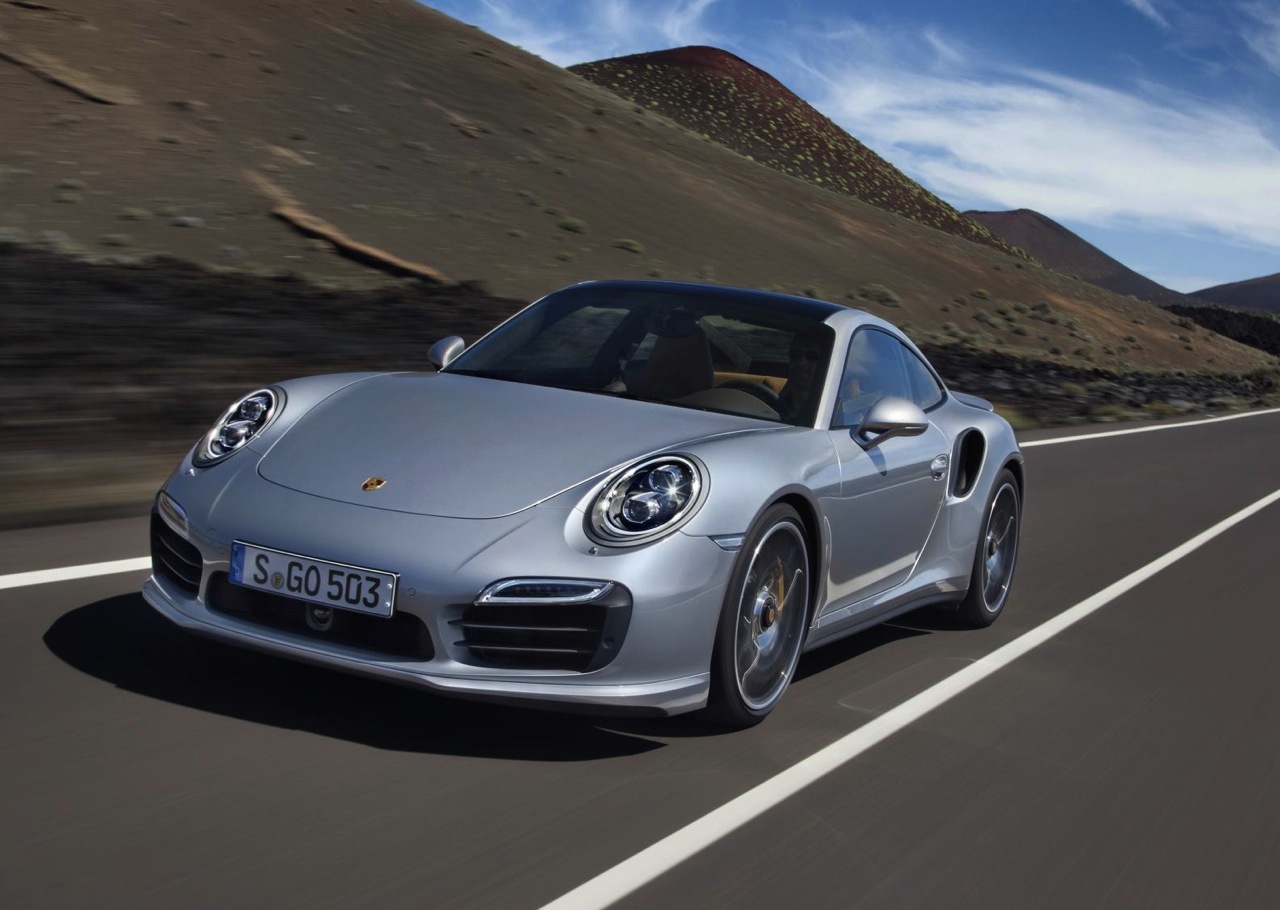 The king is back. The next-generation, 2014 991 Porsche 911 Turbo and Turbo S have been officially revealed. As suspected, the new model pushes the boundaries in performance, technical innovation, and sheer driving dynamics. 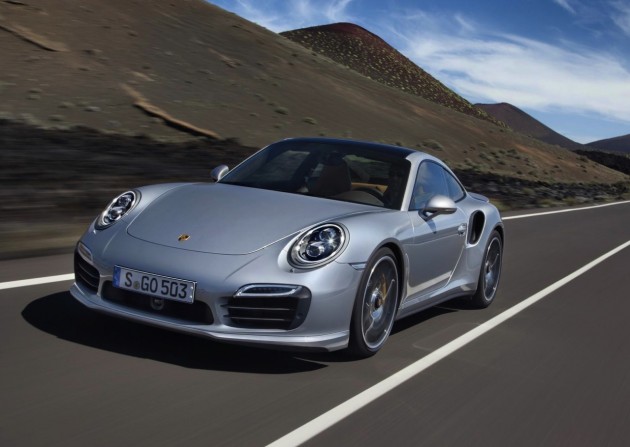 Starting with the engines, the 991 911 Turbo comes with a 3.8-litre twin-turbo flat-six engine with direct injection producing 383kW of power, while the Turbo S version is slightly tweaked and produces 412kW. Torque figures are yet to be revealed.

Both models come with a PDK dual-clutch seven-speed automatic transmission – no manual option – linked up to an advanced new ‘PTM’ all-wheel drive system. The PTM setup features a water-cooler which assists in demanding conditions, and allows more torque to be sent to the front axle if necessary.

Although the layout is sure to upset a few of the raw Porsche enthusiasts who would have nothing but a manual transmission, Porsche is adamant drivers will be convinced the latest PDK gearbox is just as engaging and even quicker. 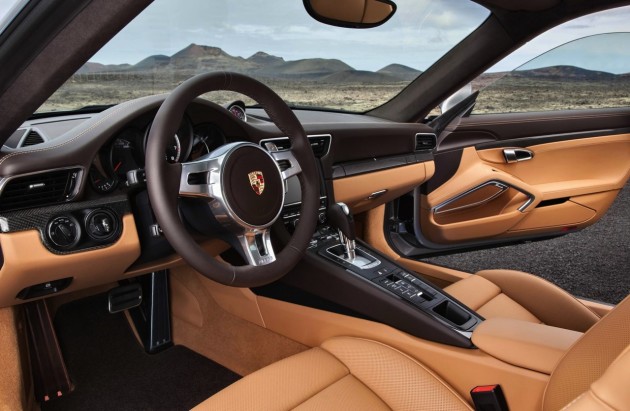 Another intriguing introduction to the new model is rear-wheel steer. As reported earlier today, the system is a variant of the rear-steer setup seen on the new GT3. Porsche explains,

“The steering angle of the rear wheels can be varied by up to 2.8 degrees, depending on vehicle speed. At speeds up to 31 mph (50 km/h), when the front wheels are turned the system steers the rear wheels in the opposite direction. This actually corresponds to a virtual shortening of the wheelbase by 250mm, which gives the 911 Turbo unrivalled cornering agility. The system lets the car turn faster into the bend and offers more dynamic steering responses. Furthermore, this noticeably simplifies low speed manoeuvring and parking.

“At speeds above 50 mph (80 km/h), the system steers the rear wheels parallel to the turned front wheels. This is equivalent to a virtual lengthening of the wheelbase by a significant 500 mm and gives the sports car tremendous stability, especially at high speeds. At the same time, the steering input by the driver leads to significantly faster build-up of lateral force at the rear axle, which initiates the change in direction more spontaneous and harmoniously.”

Turning up the technology to the next step, the 991 Turbo comes with active aerodynamics. This includes a retractable front spoiler. The Turbo has come with a hydraulic rear spoiler for a coupe of generations now, but this is the first time such attention has been focused on the front end. 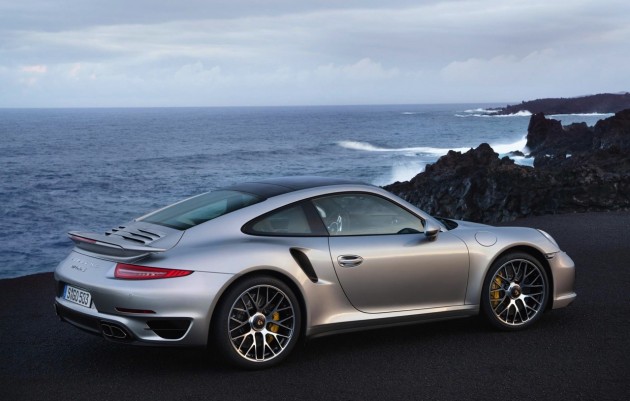 The mechanism works pneumatically and can be adjusted to suit higher speeds or maximum downforce. Paired with an adjustable rear wing, Porsche says the added downforce can reduce lap times around the Nurburgring by up to two seconds.

As previously reported, the 911 Turbo isn’t based on the Carrera 4 body, like it has been for years. Instead, it gets a bespoke skin which is 28mm wider than even the Carrera 4. This gives the car huge rear haunches which are almost horizontal for a racing-car-like stance, and to optimise airflow. From the back it looks ultra mean. 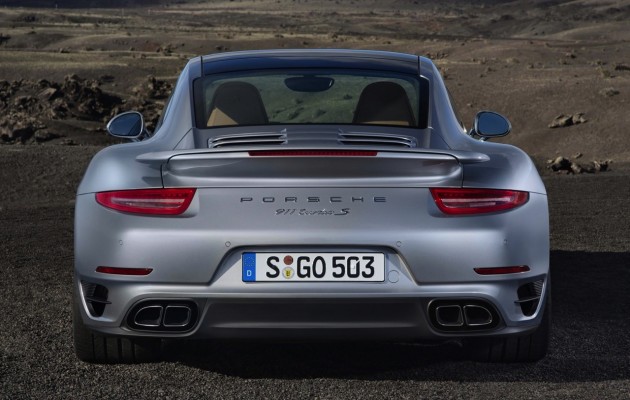 Inside, the 911 Turbo is offers extensive levels of sports luxury and electronic equipment. There’s a Bose surround sound system, sports bucket seats which can be adjusted electronically in 18 different ways, and an optional radar-guided cruise control, and an optional road sign recognition system with a built-it camera.

To top it all off, the 991 911 Turbo comes with new 20-inch forged alloy wheels. The Turbo S comes with a similar design except the wheel nuts are replaced by a racing-style single centre nut.

Although prices are yet to be confirmed, the 2014 991 Porsche 911 Turbo and Turbo S are set to arrive in Australia towards the end of this year. Start saving.