Subaru’s stand at the 2012 Tokyo Auto Salon has a couple of tasty specials, including the Subaru STI Concept that was spotted yesterday. There’s also a special Prova Subaru BRZ Black Edition attracting plenty of attention. A HKS Toyota GT 86 and Falken Toyota GT 86 were also doing drift demonstrations outside the arena. 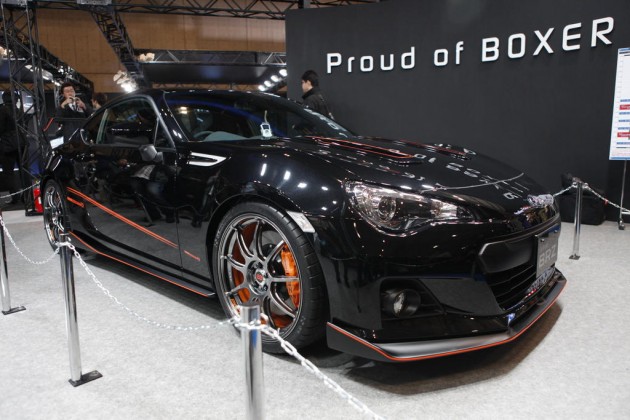 The Prova Subaru BRZ Black Edition also features a bespoke bodykit, starting with a large and low front lip spoiler, matching side skirts with a thin orange highlight bordering the entire kit, and a massive rear splitter and carbon fibre wing. It also comes with new bonnet vents that have been crafted into the BRZ design.

Unfortunately, again (like the TRD Toyota GT 86), there doesn’t seem to be any form of engine tuning.

For the HKS Toyota GT 86 drift car however, it’s unknown at this stage what specific upgrades it has, but it has been set up for drifting. Expect a full HKS suspension kit, and exhaust system at the very least.

The video below explains more than words could. It was taken at the show during a demonstration with a Falken Toyota GT 86 drift car (additional video of Falken GT 86 further down). Awesome stuff.

(Images courtesy of Autoguide and ft86club.com)