You’re looking at the very first glimpse of the first-ever AMG A-Class. It’s the 2013 Mercedes-Benz A 45 AMG. To get the juices flowing, the company has released these preliminary images showing an almost-ready prototype before its full unveiling at the 2013 Geneva Motor Show in March. 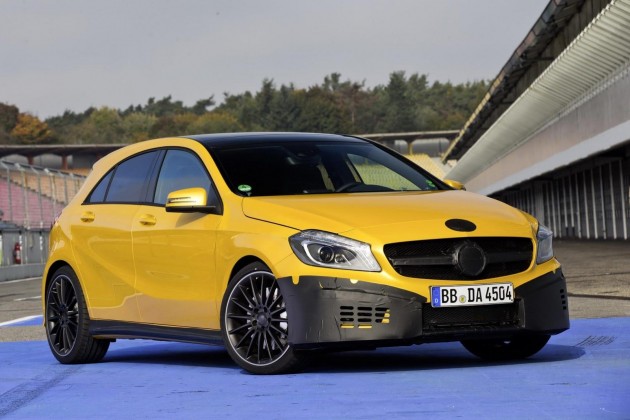 If you know your performance cars you’ll understand that anything made by AMG is serious. Being the first ever high-performance A-Class, the new model is expected to really stir up the super hot hatch market segment, competing with the likes of the just-launched BMW M135i, and the Audi RS 3.

Under the bonnet the new A 45 AMG comes with a 2.0-litre turbocharged four-cylinder engine producing an astounding 261kW of power and 450Nm of torque. Those are some incredible figures for a 2.0-litre engine.

Power is sent through a Mercedes-Benz 4MATIC all-wheel drive system, after going through a seven-speed dual-clutch auto transmission, making sure all that grunt is translated into eyebrow-raising acceleration.

Official figures are yet to be finalised, but it is understood 0-100km/h will be possible in around 5.1 seconds, with a limited top speed of 250km/h. 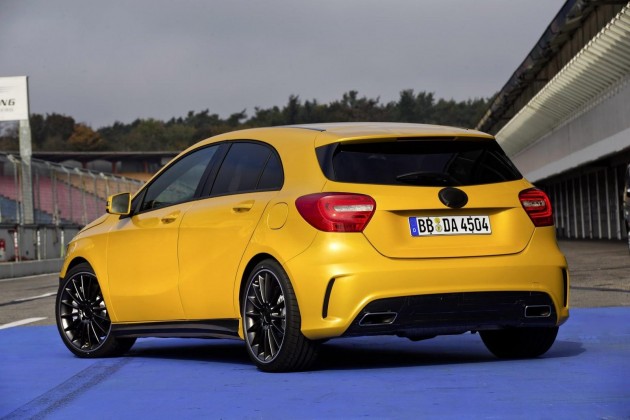 When the new A-Class was launched earlier this year, you could instantly tell Mercedes-Benz was going for a more sporty character, especially with the lower and fatter hatch shape. Compared with the previous almost-MPV-like shape, the new model is a perfect platform for AMG to get into the smaller segment.

The AMG version will come with an aggressive front bumper bar with neat spoiler extensions – still covered up in these images – while the rear benefits from aerodynamic enhancements including a diffuser section, vertical vents, and a rear spoiler.

Underneath, like all dedicated AMG vehicles, the chassis and suspension is tuned to improve handling and overall performance, with sports suspension lowering the A-Class by 25mm over the standard model. There’s also 18-inch alloy wheels hiding an impressive brake package.

To further amp up the heat of this super hot hatch a Performance Pack is also said to be on the way, potentially adding a touch more power and various styling and interior tweaks.

Australia is expected to receive the new model some time towards the end of 2013. We’ll be sure to keep you updated with official local specs and prices as soon as they are announced.