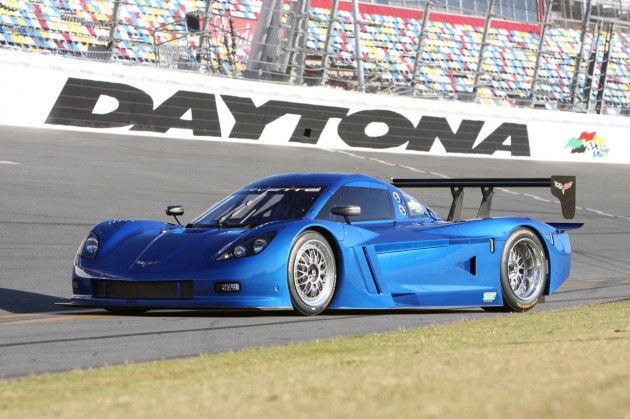 Chevrolet was able to stretch and mould the styling of its latest racing car thanks to new GRAND-AM rules that give more flexibility to manufacturers in regards to design and appearance.

Four versions of the 2012 Chevrolet Corvette Daytona Prototype will be built for racing in next year’s GRAND-AM Road Racing Series, after making a racing debut at the Rolex 24 at the famous Daytona Speedway, running January 26 to 29.

The stunning low profile body is based on the Chevrolet Corvette ZR1, with certain characteristics providing hints. It’s all draped in a very aerodynamic skin though so it cuts through the air as it’s flying around the track.

At the front there’s a low and sharp nose with Corvette-style headlights. In the middle there’s a dome cockpit which rises up from a flat body that extends to the rear. While at the very back there’s an unmissable rear wing to provide amble downforce.

“The IMSA GTP Corvette Prototype campaigned by Hendrick Motorsports in the ’80s was the inspiration for this new Chevrolet Corvette Daytona Prototype.

“And, like the GTP Corvettes, the new Corvette Daytona Prototype contains numerous styling cues from the street version of the Chevrolet Corvette.”

The Daytona Prototype will make its track debut at the GRAND-AM test at Daytona Speedway today (Australia time, Wednesday, November 16.