The Huntley Hillclimb has kicked off for 2012, with the first round of the MultiClub championship running on Sunday. No new records were broken, however, there was a scary incident leaving an Evolution Lancer with a broken nose. 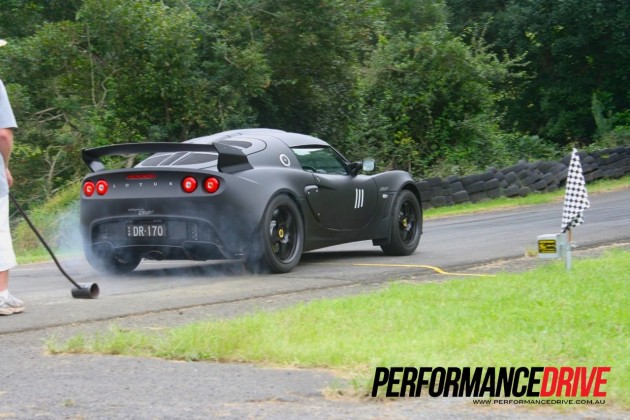 It was a mostly sunny and hot day at the climb, located just south of Dapto, with around 40 entrants in cars of all shapes and sizes. Everything thing from a relatively stock Holden Gemini to completely kitted out Mitsubishi Lancer Evolutions were competing.

Record-holder of the climb, Peter Gumley, wasn’t attending, however, there were a number of custom sprint cars getting close to his 19.99-seconds record, including a motorcycle-engine-powered Jedi Mk4 kart, and a custom creation using a twin-engined setup; powering the front wheels and powering the rear.

The fastest time of the day went to Stephen Hooker in his Jedi Mk4 race car, posting a time of 22.66 seconds (running in the 0-1300 class). This was followed up by Daniel Farquhar in his Mitsubishi Lancer Evolution IX (running in SVM Over 3000cc class) posting a 24.02 seconds. Taking third-fastest spot for the day was Jeff Denmeade in his Lancer Evolution VIII posting a 24.41-second run (also in SVM Over 3000 class). 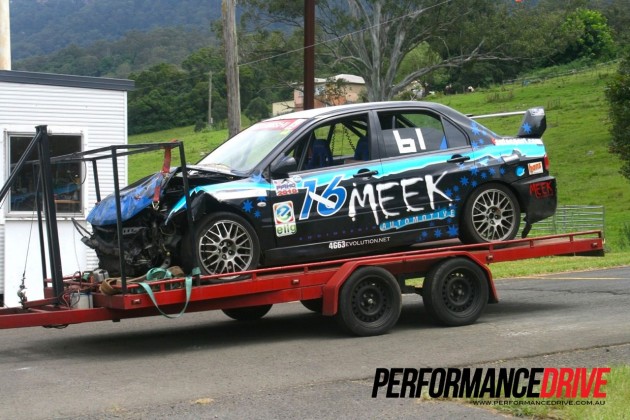 As usual at the Huntley Hillclimb, it’s great to see such a variety of cars running up the hill. Spectators can also get fairly close to the action, sitting right next to the start line. During short breaks, the officials also allow watchers to walk halfway up the stint to view the ruyns from atop a bank on the left side.

Overall, it was a good day of racing, for most. Unfortunately Catherine Hammond in the Meek Mitsubishi Lancer Evolution IX had an off, and crashed into the safety barrier. PerformanceDrive almost captured it on video, but was sitting at the start line during the take-off as you’ll see below. She still ended up running sixth-quickest time of the day, with a 25.81.

Click play on the video below for a collection of the some of the full-throttle starts and their respective times. You can look forward to PerformanceDrive attending many more events and shows like this in the future.