In Formula 1, there is no bigger race than the Monaco Grand Prix. The battle between Nigel Mansell and Ayrton Senna in 1992 has to be one of the most memorable. 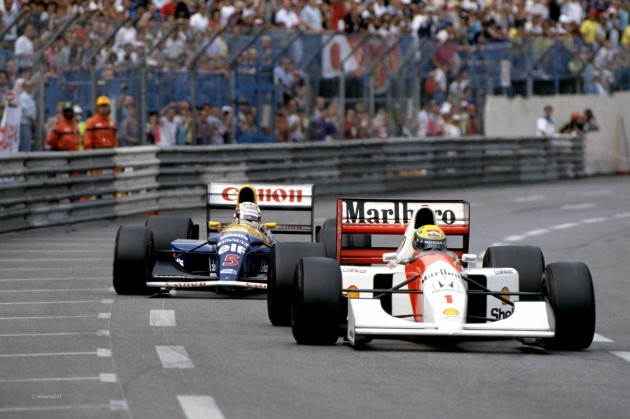 The very first grand prix was held on the streets of the prestigious principality way back in 1929, and since then its list of winning drivers features some of the best in the history of racing.

The likes of Juan Manuel Fangio, Alain Prost and Aussies Jack Brabham and Mark Webber have won in Monte Carlo. But no man tamed the tight and twisty track better than the late, great Ayrton Senna.

The Brazilian won no less than six times at Monaco. An uncharacteristic crash while leading in 1988 was the only time the great man didn’t climb the podium since his debut in 1984. His last Monaco Grand Prix win was 1993, which would be less than one year before his tragic death.

On the eve of the 2012 event, we’ve wound the clock back 20 years and remembered the fifth of those six wins, the 1992 Monaco Grand Prix.

That race will be long remembered as one of the great on-track battles – Circuit De Monaco between Senna and rival Nigel Mansell.

After winning the first five races of the 1992 season, Mansell dominated qualifying at Monaco and looked well on his way to making it six from six.

The British driver was over eight-tenths of second faster than the next fastest driver, his Williams-Renault teammate Riccardo Patrese, while Senna was a further three-tenths slower in third.

When the lights went out on the Sunday, Senna snatched second from Patrese, but for the majority of the race, Mansell dominated. That was until lap 70 of the 78-lap grand prix, when the British driver’s car suffered a loose wheel nut, forcing him to pit. Senna claimed the lead, but had used the same set of tyres for the entire race. Mansell, who now wore fresh rubber, quickly found himself right at the heels of the McLaren.

In the closing laps Senna did all he could to make his car seem three times wider than usual – just one mistake would hand Mansell the win.
But Senna didn’t give Mansell an inch and crossed the line just metres ahead.