Sport Auto magazine in Germany has put together a neat video showcasing two of perhaps the most spectacular cars currently on sale; the insane Pagani Huayra and the epic new Ferrari F12 Berlinetta. 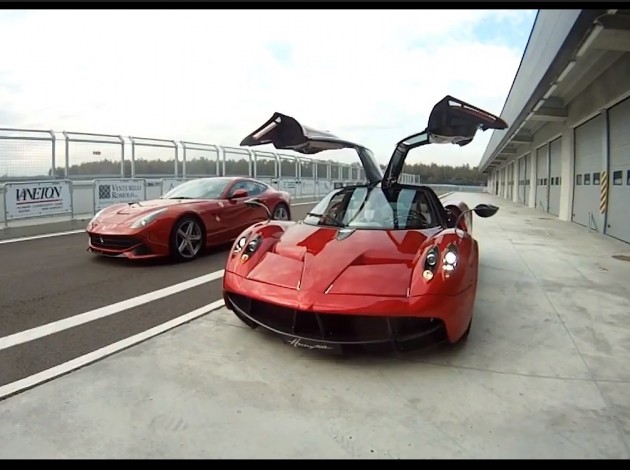 Test drive editor Christian Gebhardt puts them head to head in a range of tests in Modena, Italy, to see what divides the two. Comparisons include a sound test, a quick acceleration drag race, and some general runs out on the circuit. The video doesn’t have any nonsense talking or opinions, it’s simply a showcase of two fantastic machines.

You can see how savage the acceleration of the new Ferrari F12 is at around the 1:40 mark, using long-legged gears to just pull and pull and pull.

It’s powered by Ferrari’s most powerful production engine it has ever made, consisting of a naturally aspirated 6.3-litre V12 churning out 545kW and 690Nm.

Meanwhile, not to be overshadowed, the Pagani uses a bespoke Mercedes-Benz AMG-developed 6.0-litre twin-turbo V12, producing 537kW and 1000Nm.

On paper, the Pagani is lighter in weight but is slightly slower covering the 0-100km/h dash; 3.3 seconds versus just 3.1 seconds in the Ferrari.

Click play below to see how they go. Both machines are incredibly quick and almost seem too fast for the track, simply devouring each straight.

If you’re wondering, and you have lots of money, only the Ferrari F12 is officially available in Australia. It has a starting price of $690,100.