A horrific accident has been captured on film of Jeremy Foley in his Mitsubishi Lancer Evo VIII race car flying off one of Pikes Peak’s notorious cliff faces during this year’s hill climb event. Foley and his co-driver miraculously survived. 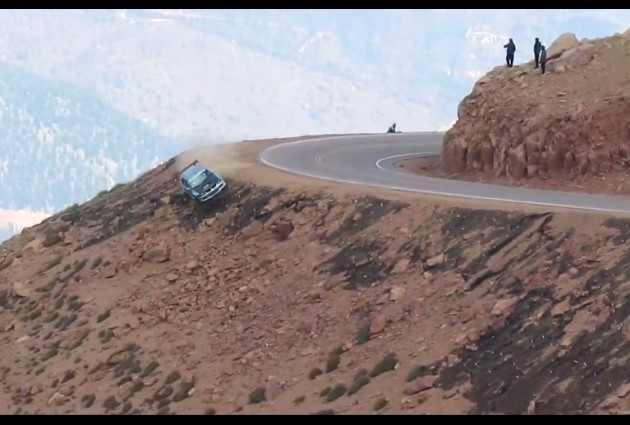 The Pikes Peak International Hill Climb is one of the more serious races on the worldwide motorsport calendar. It attracts all sorts of drivers and all sorts of vehicles, from specialist racers to near-production cars.

The climb takes place on a mountain in the Rocky Mountains in Colorado, USA. It involves sprinting up a 19.99km stripe of tarmac – previously half dirt half tarmac –  with an altitude climb of 1.44km. The finish line sits some 4.3km above sea level, or just over 2km higher than Mount Kosciuszko (Australia’s highest mountain).

With this kind of terrain, you can begin to imagine the potential dangers, especially as many of the corners up near the top don’t feature any form of guardrail.

After making a judgement error with the pace notes, Foley’s 418kW Evo plummets off one of the cliff edges for a long tumble down the mountain. Some how both the driver and co-driver survived, only suffering a general battering. Foley recently said,

“Yuri and I are ok. A little beaten up but nothing major. Thank you so much to everyone for the kindness and support! What a wonderful feeling to feel so loved!”

Click play below to see how it all unfolded.