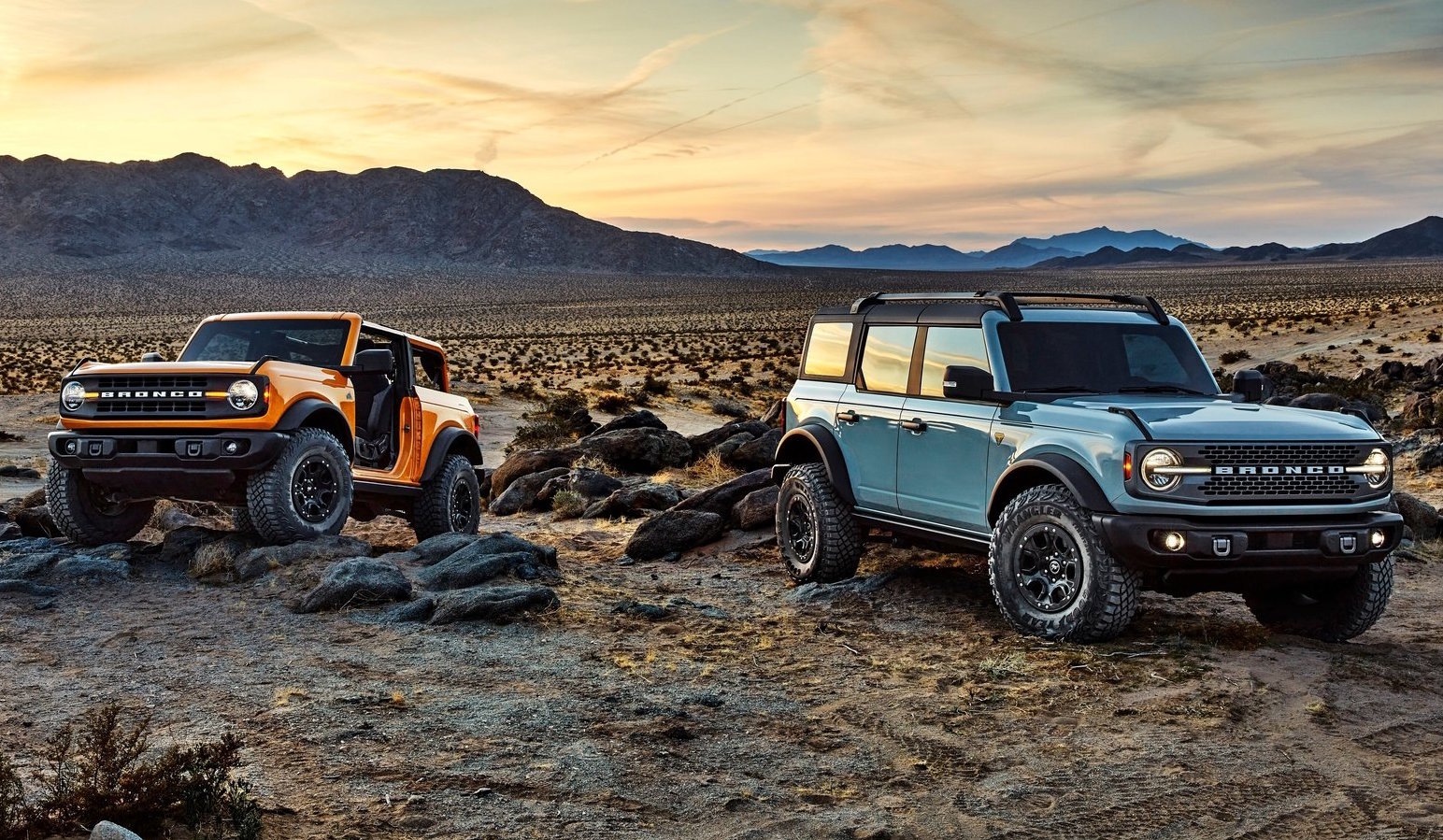 We last saw the nameplate back in 1996. But now the Ford Bronco is back for the 2021 model year. It looks a bit like the early generation models, while blending in lots of modern attitude, capability and technology. 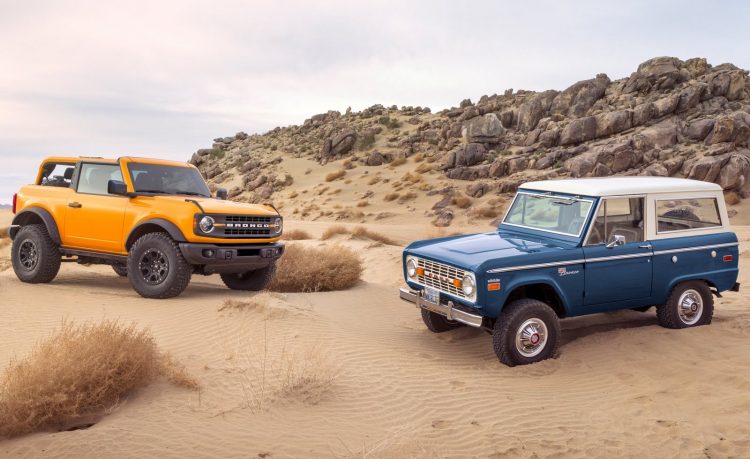 Ford of America is presenting the new model in both two-door and four-door body styles. Avid fans of the nameplate will quickly point out this is the first four-door Bronco ever. They both take on the same adventurous styling language, built on a fully boxed, high-strength steel ladder-style chassis.

At the front is an independent suspension setup which promises control and confidence, while the rear end uses a heavy-duty five-link live axle arrangement with coil springs. Ford claims the Bronco offers the best-in-class suspension travel. Buyers can also option for position-sensitive Bilstein dampers with end-stop control for added comfort and reduced harshness. 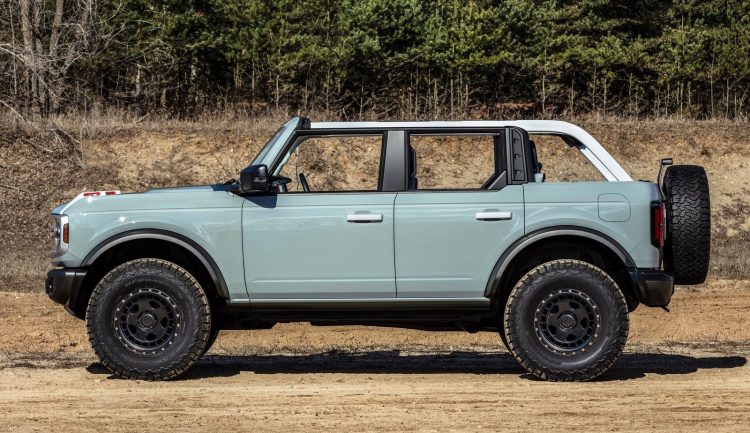 A semi-active hydraulic stabiliser bar disconnect is available for maximum wheel articulation, and for the first time in the segment buyers are able to option 35-inch tyres from the factory and for all trim levels and variants of the Bronco. Bead-lock wheels can be optioned for further durability.

When configured in optimal specification, the 2021 Bronco offers 11.6 inches (295mm) of ground clearance, with a departure angle of 37.2 degrees and a break-over angle of 29 degrees. An approach angle hasn’t been mentioned. It also offers a water wading depth of 33.5 inches (851mm) – there’s even a drain plug in the floor for easy cleaning. 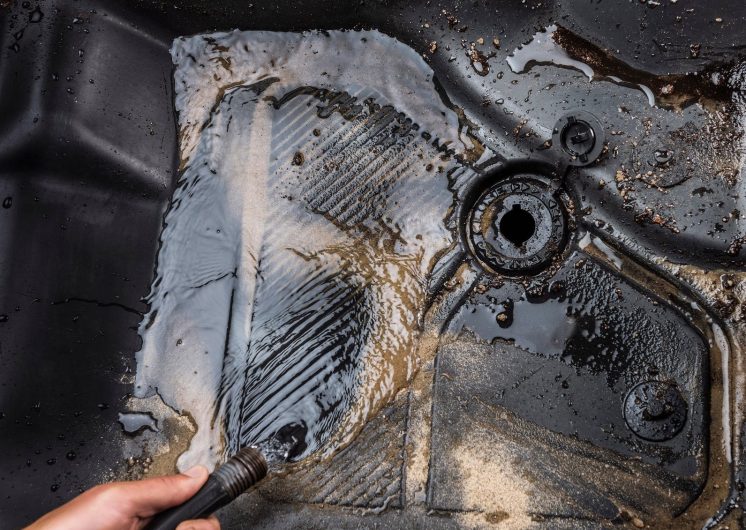 In all trim levels Ford is offering two main 4×4 systems. The base setup incorporates a shift-on-the-fly electronic two-speed transfer case, while the optional advanced 4×4 system uses an electromechanical transfer case with an on-demand auto mode for selecting between 2H and 4H. From there the power is sent to Dana 44 AdvanTEK rear axles and a Dana AdvanTEK independent front differential. Spicer PerformaTrak electronic diff locks are optional.

So, what powers the new beast? Ford is presenting two options; a 2.7-litre EcoBoost turbo-petrol V6 that produces a projected 231kW (310hp) and 542Nm, as well as a 2.3-litre EcoBoost four-cylinder that is projected to produce 201kW (270hp) and 420Nm – Ford is only providing estimate outputs at this stage. These come with either a segment-first seven-speed manual or a 10-speed auto. 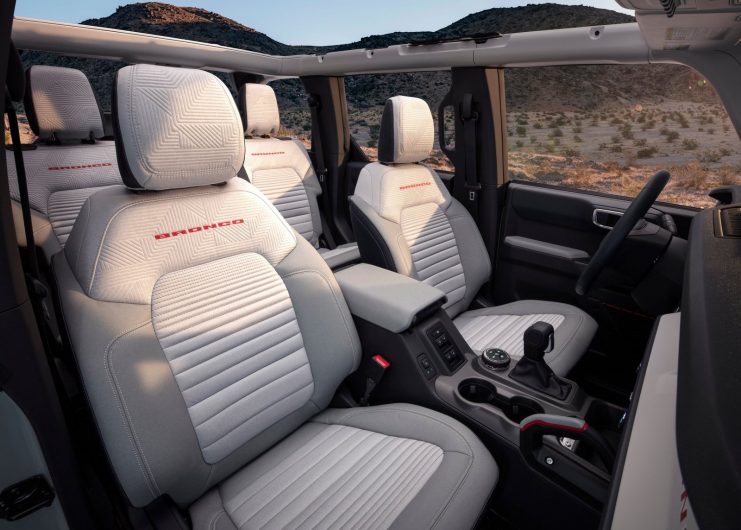 The two-door models feature a three-piece roof which can be removed, while the four-door layout uses a four-piece removable roof. Ford says all roof panels can be removed by one person by unlocking the panels from inside, and the two-door model offers a special on-board storage spot for the first row panels.

As for the interior, Ford designers have created an atmosphere that’s both open and airy but also quite modern and unique. Ford has used natural colours and materials which are inspired by outdoor gear for the decor, while the dash and door trims are set as close to the exterior panelling as possibile to create an open feel. 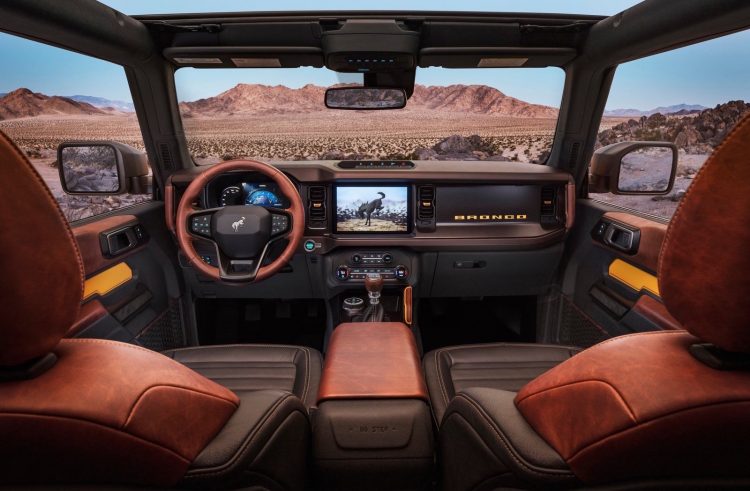 Up on the dash is either an 8.0-inch or 12-inch touch-screen running SYNC 4 operating system. There’s also an LCD instrument cluster. The on-board sat-nav includes trail content from NeoTrek’s AccuTerra Maps, with over 100 curated tracks that owners can explore. Jim Farley, Ford chief operating officer, spoke of the new model, saying:

“We created the Bronco family to elevate every aspect of off-road adventure and equipped them with class-leading chassis hardware and exclusive technologies to raise the bar in the rugged 4×4 segment and take people further into the wild. They’re built with the toughness of an F-Series truck and performance spirit of Mustang – and come wrapped in one of the most stunning and functional off-road designs that’s true to the original Bronco design DNA.”

The 2021 Ford Bronco will be manufactured at the Michigan Assembly Plant in Wayne, Detroit. Buyers will be able to select between 11 colours and over 200 dealer-fit accessories, as well as choose between four main content packages. At this stage there are no firm plans for the Bronco to be introduced in Australia, unfortunately.