Chevrolet has already begun testing the 2016 Chevrolet Camaro, as spotted here at the Nurburgring in prototype form. This is an interesting model as it could be the one that comes to Australia, if GM ever decides to give it the green light for Down Under. 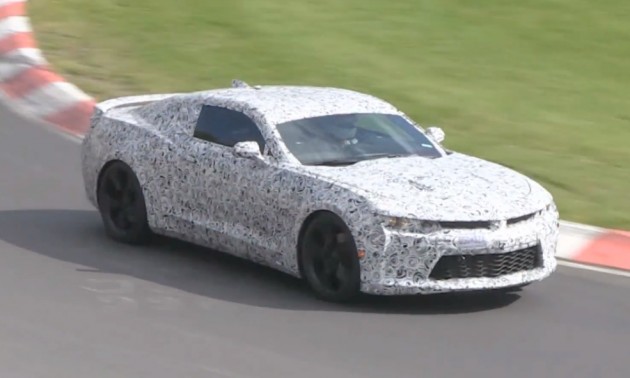 There has been no confirmation from Holden that the Camaro will ever be offered locally, however, if there was ever a good time to introduce one it would be during 2016.

You see, Ford Australia is introducing the Mustang next year as it prepares the closure of local manufacturing. The Mustang will become the brand’s halo model after the Falcon is gone. As for Holden, there will be no direct rival, and we believe GM isn’t going to like this. Australian consumers are quite hungry for performance cars and sporty variants; there is certainly a market demand.

One of the biggest changes to the 2016 Camaro is rumoured to be the introduction of a new 2.0-litre turbo four-cylinder engine option. This is apparently being considering to provide competition for the 2015 Mustang 2.3-litre EcoBoost variant.

Specifics are a little hazy but word has it GM will use the 2.0-litre turbo engine found in the Chevrolet ATS and CTS, where it produces 202kW and 399Nm. These outputs might be tweaked to sit alongside the Mustang’s 231kW four-cylinder offering.

As for design changes, the body and pillars are expected to be changed for a sleeker look and to improve aero efficiency, while the front end is likely to be updated with new headlights and grille. The rear haunches look slightly bolstered on the prototype as well, giving it a more muscular stance.

Click play on the video below, provided by worldcarfans, to take a look. And feel free to tell us what you think, should Holden bring across the Camaro? Would you buy one?