Two-time WRC winner Carlos Sainz has been seen testing the 2013 Volkswagen Polo R WRC mule in the back roads of Germany. This comes after Volkswagen announced it would join the WRC in 2013, after being absent from the sport for more than 20 years. 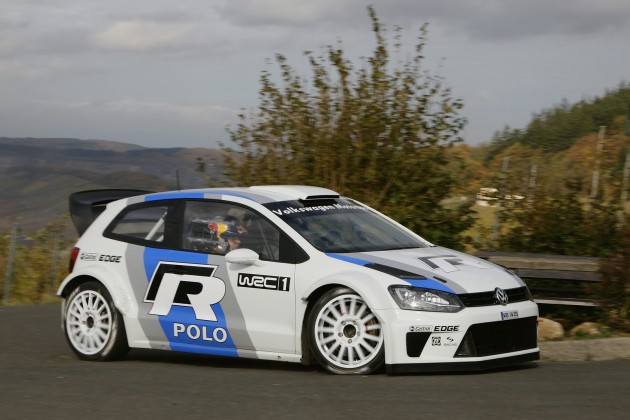 The 2013 Volkswagen Polo R WRC car, as per FIA restrictions, will be equipped with a 1.6-litre TSI turbocharged four-cylinder engine developing 300hp (224kW) and 350Nm. As you can see in this video, the car features a very menacing body kit with flares and scoops all over the Volkswagen Polo shell.

Carlos Sainz said that Volkswagen’s commitment to WRC is the next stage in returning the sport to its glory days.

“VW has grown to become one of the strongest companies in the world, and that this company has decided to come to the WRC is magnificent.”

This new direction for Volkswagen comes after swapping its motorsport program focus from Dakar to WRC – 49-year-old Carlos Sainz won the 2010 Dakar rally behind the wheel of a Volkswagen Touareg.

While Carlos Sainz isn’t the actual test driver for the 2013 Volkswagen Polo R WRC, he is employed to offer his WRC knowledge (winning two WRC championships and 26 rally wins for several different manufacturers – most famously with Toyota – in the past) and expertise to Volkswagen to make sure their entry will hit the ground running.

“Time is already counting down, and although 2013 looks far away right now, it’s going to come around very quickly. We need to go step-by-step and work very hard if we want to be competitive from the start. The team has to work to the maximum – and I’m sure they will.

“I have a lot of experience in the WRC, and I’m ready to help the team as much as possible in all areas. I’ve been in rallying all my life, in so many different teams and I know many people. I’ve won with most of them and with most of the cars I’ve driven.

“I think I know a little bit and have a good picture of what is required. I’m not the team manager, but I will be close to Kris (Kris Nissen, Volkswagen Motorsport Director) and I hope we can do a good job.

“It’s going to be good fun to test the car to help the team – but I’m not going to be the test-driver. From time-to-time I can drive the car to give my opinion and my impressions, but it will be very important from the beginning to have the right drivers in the car. You can very easily lose direction if the indications from the driver are not good.

“The new regulations allow a new manufacturer to come and be closer than in the times of the front active diff, centre active diff and rear active diff; the traction control; ABS and all of these things. I remember the last time I drove the Citroen, it was full of electronics and now this has changed. This makes it a little bit easier for Volkswagen.”

We’ll be the first to admit that WRC has been somewhat lackluster (with only Citroen and Ford competing) over the past few years after most of the manufacturers pulled out – namely Mitsubishi, Toyota, and Subaru.

With the recent injection of the Mini Countryman WRC, the addition of the 2013 Volkswagen Polo R WRC will only add to the spirit of the sport in the future. We’re certainly fans of the new competitors, are you?