Shelby has announced it will unveil the special 2013 Ford Mustang Shelby 1000 at the 2012 New York International Auto Show next month. As the name suggests, up to 1000hp is on offer. 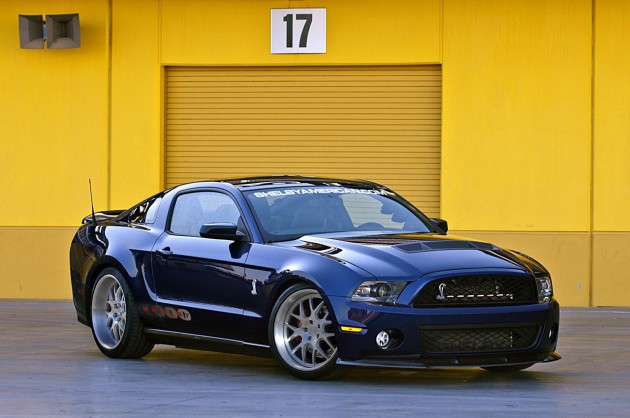 Instead of using the 5.8-litre, Shelby uses the 5.4-litre V8 from the previous model Mustang GT500. The engine is stripped down and rebuilt with new pistons and conrods, and a new crankshaft. Shelby then adds a new supercharger and fits an uprated cooling system.

To help harness and redirect the power, the 1000 package comes with a fresh suspension system with new struts, a solid drive shaft, and a nine-inch rear axle. Speed can then be wiped off with a six-piston brake kit on the front and four-piston at the rear.

The body of the Mustang is treated to an aerodynamics package comprising of a front splitter, rear diffuser, and a new bonnet. John Luft, president of Shelby American, recently spoke about the heritage behind the beast, saying,

“Carroll Shelby is a visionary who has pushed the boundaries of performance his entire life. He challenged the Shelby American team to develop the Shelby 1000 and wanted to unveil this amazing new Shelby at the New York Auto Show, celebrating 50 years since he unveiled the very first Shelby Cobra that changed the face of high performance. We will have that very car, Cobra #1 (CSX2000) along with Shelby 1000 on display in our Shelby American booth in New York.”

Only a limited number will be produced, with prices starting at US$149,995  for the street version, and US$154,995 for the track version. Prices do not include the original outlay of the Ford Mustang.

UPDATE: Road & Track has put together a nice little showcase video of the insanely powerful machine. Click play below.