More and more details of the highly anticipated Toyota FT-86 are coming through. Today, images of the TRD Toyota FT-86 have been revealed in a leaked parts catalogue. 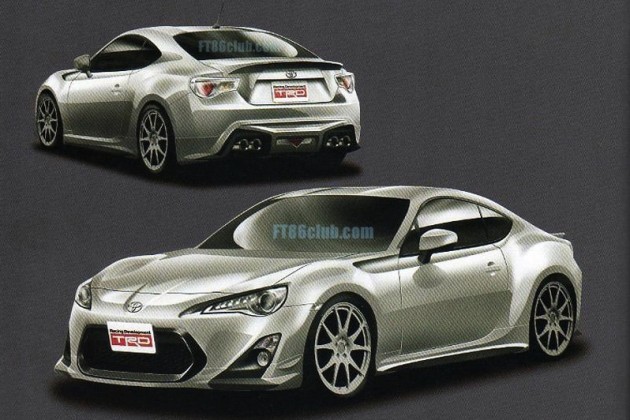 The TRD Toyota FT-86 consists of a styling kit which dresses up the new sports coupe for a bit of personalisation. These images, first revealed by FT86club.com shows Toyota will be offering various accessories and upgrades for the new coupe.

At the front, the TRD Toyota FT-86 features a revised front bumper bar with a more aggressive and lower front lip. There’s also a number of darkened grey highlights around the central grille and the corner spotlight sections.

At the back, there’s matching grey highlights, such as a new chunkier rear diffuser surrounding a quad-outlet exhaust system. The boot lid also gets a fresh lip spoiler. Other features include HID headlights, side skirts, and 18-inch alloy wheels.

Under the bonnet will lie the normal 2.0-litre naturally aspirated four-cylinder engine, with direct injection, developing 147kW of power and 205Nm of torque. We can expect 0-100km/h times in around the seven-seconds range, partly thanks to the 1210kg weight.

Toyota Australia has confirmed the Toyota FT-86 will go on sale locally, with arrival set to take place in mid-2012. Pricing details are yet to be finalised, as well as confirmation on these TRD options.