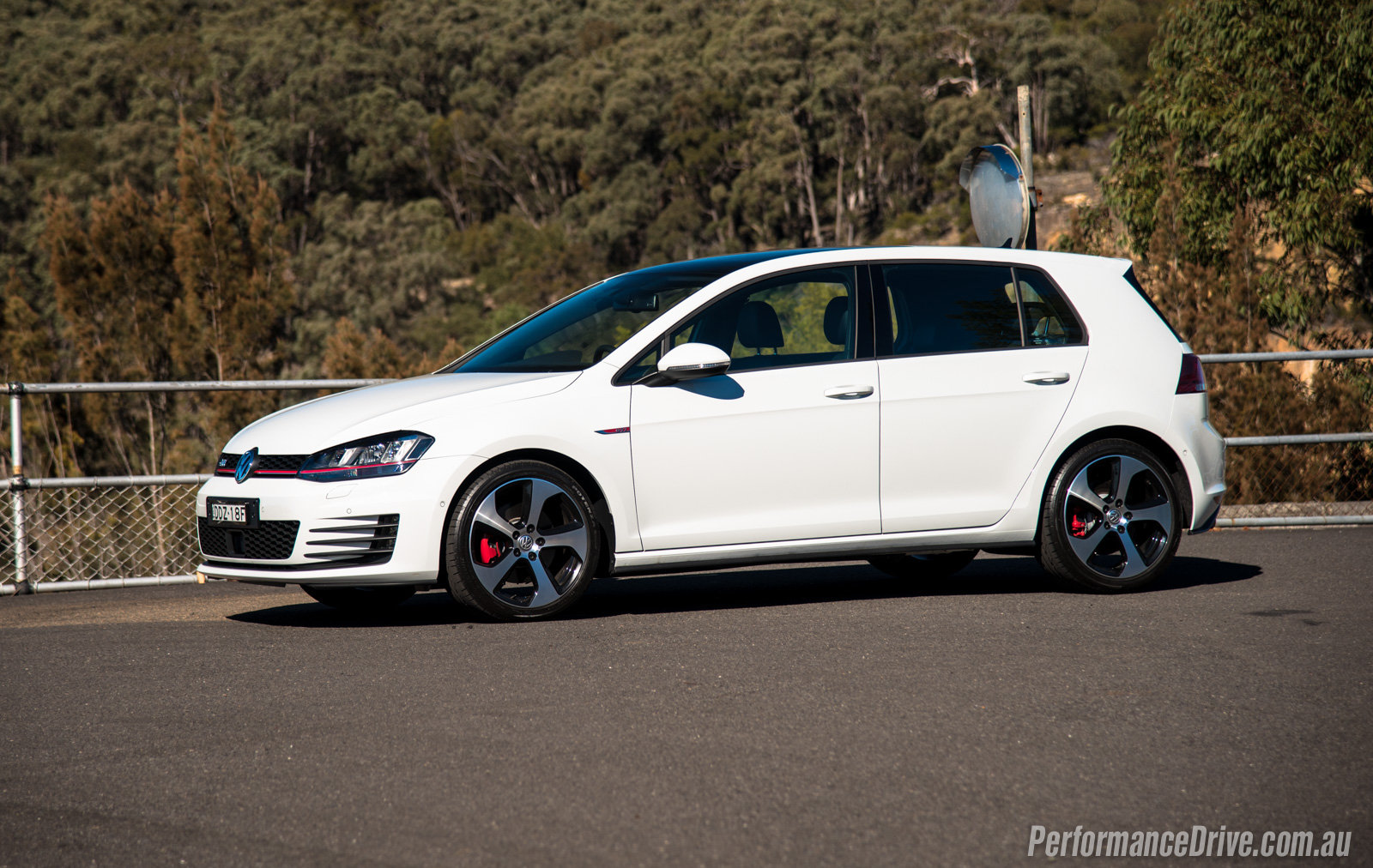 There’s a wonderful juxtaposition with the Golf GTI. To those who are unfamiliar with the GTI moniker, it’s a Golf, nothing more to see here. Sitting inside the cockpit, the sporty yet subdued surroundings usher your passengers into a quiet and refined cabin; it’s a sophisticated, almost serious affair. 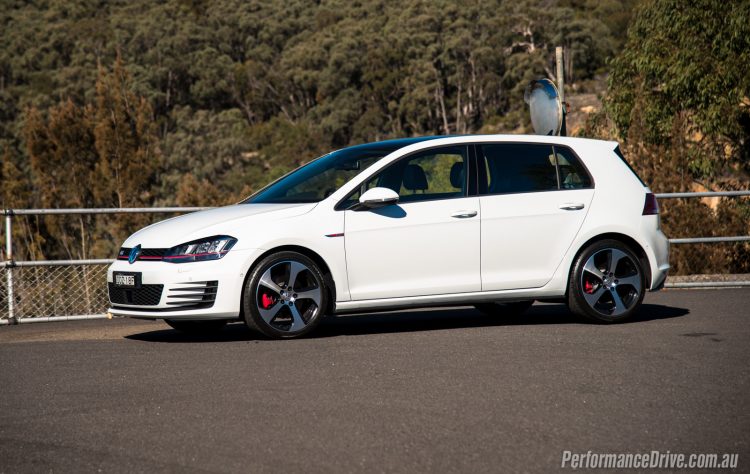 Put your foot down however and your unsuspecting passengers won’t believe the way this thing picks up pace and holds it through the bends. This is quite simply why we – and the rest of the automotive world – fall in love with the GTI with every drive.

However, the Mk7 has been around for a few years now and stands relatively unchanged since its 2013 introduction. This should be a little unnerving for Volkswagen as other manufacturers have continued to tweak their hot hatches to try and catch up. It’s also now the least powerful of its main competitors. So then, has the GTI been overtaken or is it still the automotive icon that everybody turns to as the benchmark?

The Golf GTI lineup consists of two variants; GTI and GTI Performance. The base six-speed manual GTI kicks off from $40,990, while opting for the six-speed dual-clutch DSG auto will set you back $43,490. The separate ‘Performance’ variant of the GTI starts at $46,490, and extracts an additional 7kW from the powertrain and adds some more equipment. There is no manual transmission to accompany the Performance though. 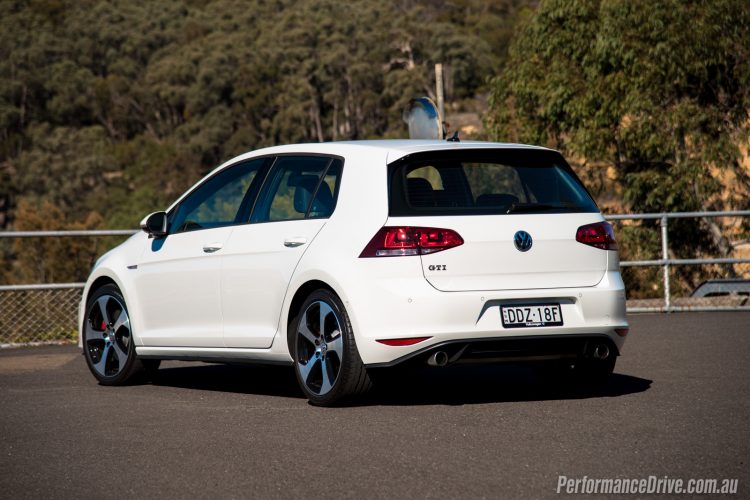 Approaching the GTI, you’d be forgiven for thinking that not much has changed in terms of styling. Quite simply, it hasn’t. Volkswagen has made an array of small changes, like adding new active xenon headlamps and sharpening up the lines across the bonnet and doors, but other than that, it’s your typical Golf body.

Granted, you can’t really call the GTI ‘affordable’ in the traditional sense, but the quality offered inside the little Golf seems well beyond the $43k asking price. VW fares better than most at making interior textiles appear to be more luxurious than they actually are.

The cabin’s ambience is exactly what you’d expect from a Volkswagen, but the cabin does have some roar on a more coarse surface, mostly due to the low-profile 225/40 tyres. 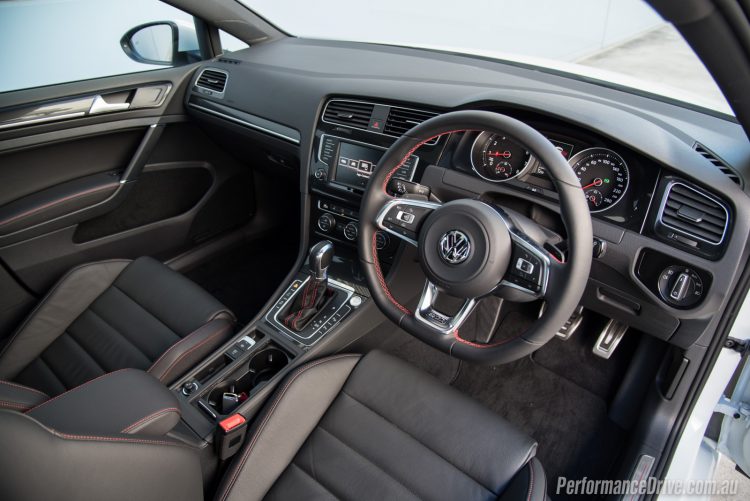 The steering wheel is one of our favourites, and the overall quality inside is faultless. The heavily side-bolstered seats are comfortable, all the instruments have that typical VW look and feel, and now in the MY16 version there’s Apple CarPlay and Android Auto connectivity.

As a family car, the GTI retains almost all the practicalities that have made the Golf a hit with families. Aside from the bulkier sport seats, the GTI remains spacious up front, and reasonable enough for adults in the rear. Headroom is impressive for a car of this stature, but legroom in the rear isn’t a strong point. Turning to the rear of the car, the GTI’s boot can swallow up 380L, but note there’s only a space-saver spare under the floor of the boot.

In respect to economy, VW claims a combined cycle of 6.6L/100km. We weren’t able to match that, probably because more often than not we accelerated a little bit too enthusiastically. Our average returned figures in the 8.0L/100km region. 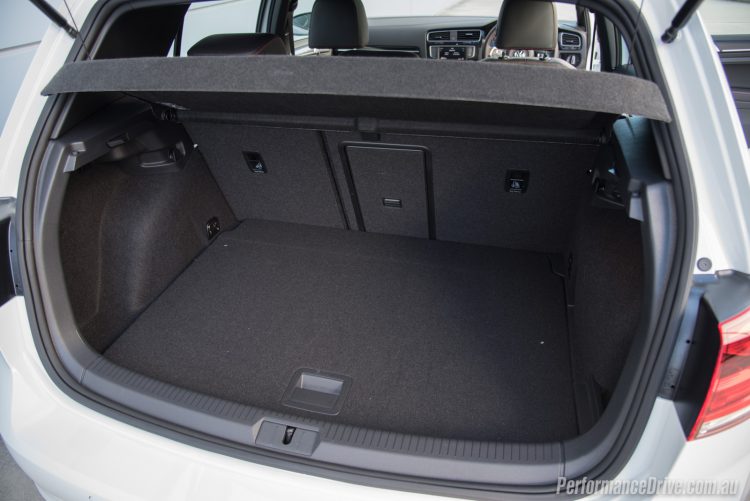 What is most surprising is the way in which the output is transferred to the road in a very user-friendly manner. Gone are the days of wild torque steer and turbo-lag; the GTI is ridiculously manageable when putting your foot down. Composed is probably the best word to describe the power delivery. Regardless of the situation, it seems to navigate itself out with absolutely no tangible sense of nervousness.

Combining the short wheelbase of the Golf body and independent suspension front and rear, the GTI is a hoot to drive on a winding road. The initial turn-in is sharp, and the body handles the weight transfer with no loss of stability and very little body roll. Some of this stability is thanks to a clever electronic-locking differential sitting at the front axle. 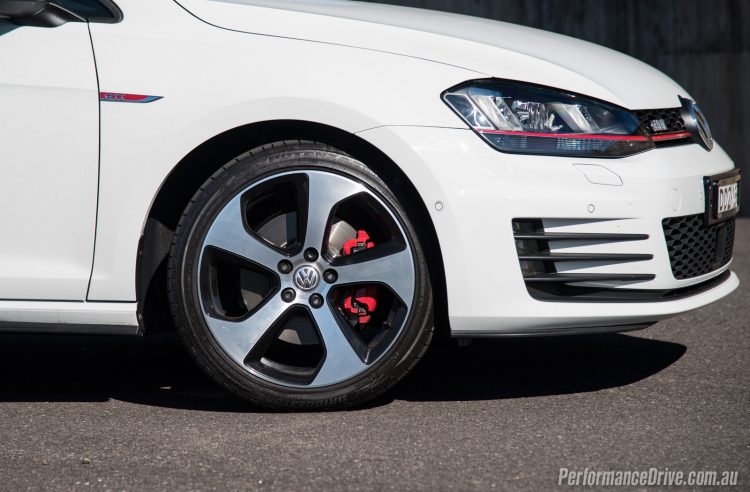 While the ride is firm, Volkswagen has opted for a more sophisticated suspension setting rather than a super stiff, overly-sprung setup that some of its hardcore rivals have adopted. When bumbling around the city, the GTI is noticeably more comfortable than its rivals, offering a significantly suppler ride.

The electronically-assisted steering feel may not be a favourite for some purists, but it’s undeniable Volkswagen has used some sort of voodoo to extract such a tangible connection between the front axle and the wheel. The steering system is a variable-ratio system, which essentially quickens the ratio as the wheel is turned at low speeds. It’s also one of the sharpest steering racks, at 2.1 turns lock-to-lock.

The brakes feel great once you’ve become familiarised with the biting point, and they can withstand a spirited mountain drive like it’s a school run. You’ve got to be really, really pushing it to get any fade, and they will almost certainly have already made your passengers sick before you reach this point. We timed a 100-0km/h stop in very respectable 37.93 metres.

Despite the rather serious connotations typically associated with the Germans, the GTI is a car that can quite easily make you feel sixteen again, even just dropping the kids to school. It’s the accessibility of the GTI’s performance that is most impressive, and arguably why so many people have fallen for it.

Tone it down around town and the GTI becomes a conservative Golf again. Normally, driving a corner-destroying speed-machine around town feels like you’re driving a corner-destroying speed-machine around town. Namely because of a profound lack of practicality, lurchy transmission and/or shocking ride quality. Thankfully, you’ll make none of these concessions with a GTI. Although the ride quality is on the firm side, it remains far from uncomfortable. 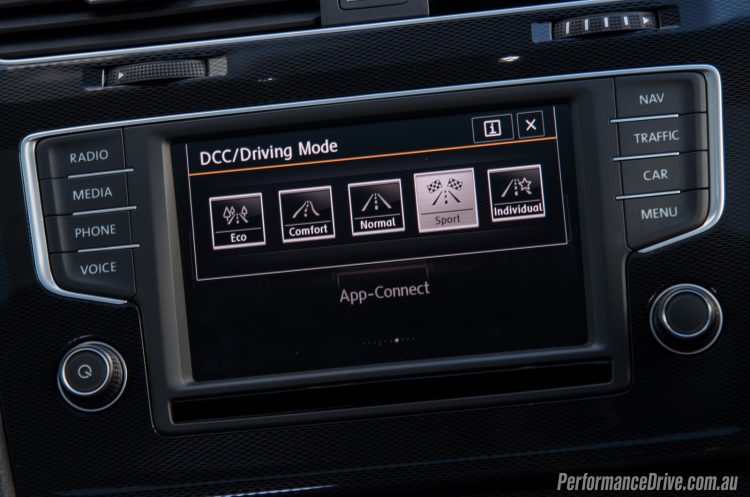 It makes bad drivers better and decent drivers marvel at how much performance a front-wheel drive hatchback can offer. All this while offering the everyday practicalities that have made the Golf a worldwide consumer hit.

What can we say about a vehicle that has a permanent pedestal in the automotive world? It’s deserved, that’s for sure. The Golf GTI is one of those vehicles that if you were to ask a lot of our colleagues which car they would own for the rest of their life, we’d likely hear several mentions of the Golf GTI. We think that’s exactly the reason why the GTI is still ahead of the game in a lot of respects over cars like the Renault Megane and Ford Focus ST. While it may be trumped in some aspects, as an overall package, the GTI after 40 years is still close to faultless.

CONS:
– DSG still has its flaws
– Least powerful hot hatch in the segment
– Too neat and tidy?