The TechART 2012 Porsche 911 individualisation program is on the way, with the renowned Porsche tuning company releasing early previews to its upcoming kits for the 991 911. 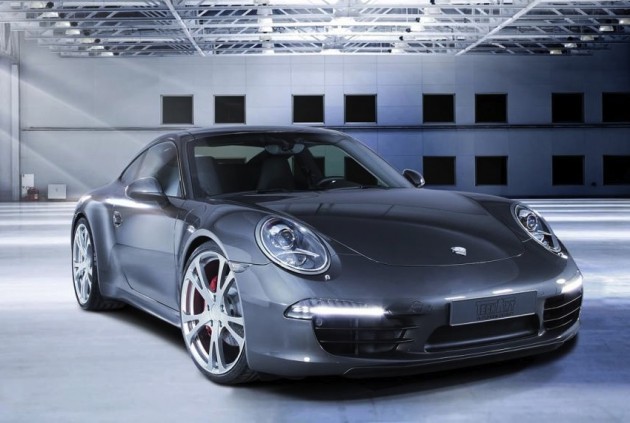 With a couple of very big international motor shows just around the corner (Detroit and Geneva), various companies are starting to provide teasers of their upcoming products. TechART is the latest company to jump on such bandwagon, previewing its plans for the all-new 2012 991 Porsche 911 Carrera and Carrera S.

TechART is usually responsible for mega engine tuning programs which take horsepower figures to very serious levels, but in this case, the TechART 2012 Porsche 911 individualisation program consists of mainly cosmetic upgrades. Various carbon fibre trimming highlights are available inside and out.

The new 911 pack gets 20-inch lightweight ‘Formula’ alloy wheels for the front and 21-inch versions for the back. These expose coloured brake calipers in whatever colour the owner chooses, and provide a weight saving of up to 15 per cent over the standard items.

Inside, TechART has applied its usual clubsport-like decor with a new three-spoke steering wheel, including bespoke TechART paddle shifters for automatic versions. There’s also reupholstered seats and console in whatever material the owner chooses, from custom stitched diamond-pattern leather to softer Alcantara finishes.

As for tuning under the bonnet, TechART will offer engine tune options, but for now this kit is all about giving your 911 some individual touches. It does include a set of sporty exhaust tailpipes though, in either oval or round stainlesss steel.

The full range of TechART 2012 Porsche 911 packages will be on display at the 2012 Geneva Motor Show in March.