According to insider word from a Subaru dealer, the Subaru BRZ is confirmed to hit Australia in May. It will rival the Toyota GT 86 (which could be called, simply, the Toyota 86). 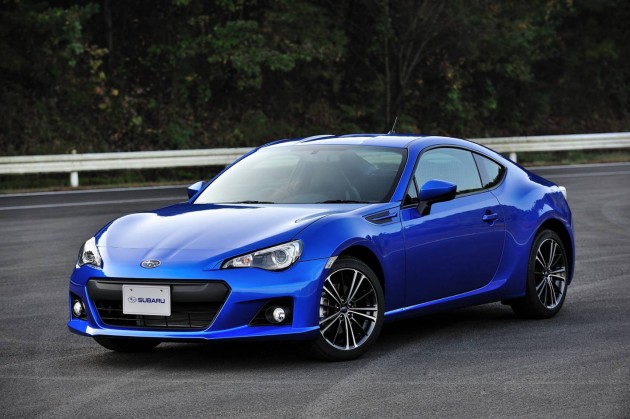 There has been a bit of hesitation from Subaru Australia over the possible introduction of the Subaru BRZ, with fears that it may disrupt the current brand personality and its ‘all all-wheel drive’ lineup. But according to a report, citing insider word from a dealership, the BRZ has been confirmed.

Earlier this week Subaru New Zealand confirmed it will be getting the highly anticipated new coupe. Official word from Subaru Australia is still yet to be made however, as the company did say a decision wouldn’t be announced until the week before Christmas.

It will feature the same engine as seen in the other half of the joint project, offering a 2.0-litre naturally aspirated four-cylinder boxer engine producing 147kW of power and 205Nm of torque. Acceleration from 0-100km/h will be in the 6.0-7.0 seconds range.

The Toyota GT 86 is set to hit the market in mid-2012, so maybe the Subaru BRZ will not only be headed our way, but it could be the introductory model of the new project.

Exciting times ahead for Subaru, as the news is likely to claw back some of its performance enthusiasts and fading WRX fans.

More details on the BRZ can be found here.

“We have been an exclusively All-Wheel Drive car company since 1997, so the decision to import the Subaru BRZ was not taken lightly.

“However, several factors swayed our decision – the passion and persuasion of the FHI engineers involved in the project was telling.

“They have poured their DNA into this car, so it drives like a Subaru. And because it is built in our spiritual home in Gunma prefecture, it has to be a Subaru.

“It’s a driver’s car, so is in keeping with our fun to drive philosophy.

“Secondly, the testing and development we have undertaken for the Australian market has left me in no doubt that this is a Subaru specifically for our unique Australian conditions.

“Thirdly, we have been overwhelmed by the response to the BRZ since its unveiling in Tokyo. People have been pleading for us to bring the BRZ into the country.

“Dealers have been astonished at the level of interest. Indeed the first BRZ has already been sold in Adelaide, despite no pricing or specification being released.”

Pricing and official specifications and trim levels are yet to be finalised, but we could expect it to enter the market at around the $40,000 price point just like the Toyota GT 86.