Porsche has unveiled a new variant at the 2011 Los Angeles Auto Show called the Porsche Panamera GTS. The GTS will sit in between the top-spec Panamera Turbo and the Panamera S and 4S. 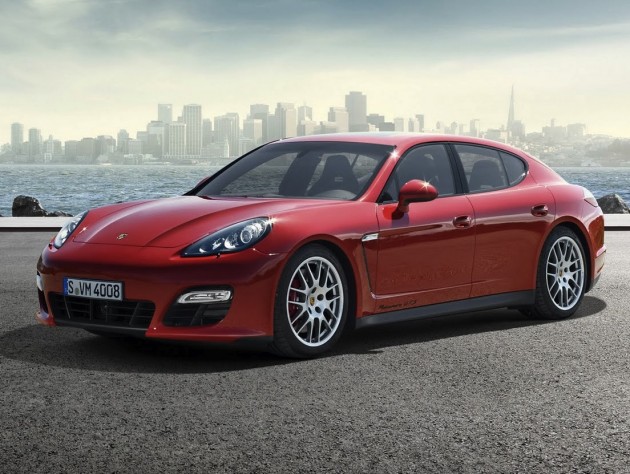 The new Porsche Panamera GTS is based on the Panamera 4S, featuring the same all-wheel drive layout. The GTS comes with various performance-oriented revisions though including slight cosmetic tweaks, such as Bi-Xenon headlights complimented by LED daytime running lights, a SportDesign front fascia with air ducts leading to a pair of GTS air filters.

Other highlights include sports air suspension and Porsche Active Suspension Management (PASM) system, lowering the Panamera by 10mm over other Panamera models, the Sport Chrono pack – which comes standard with the new variant – and Porsche Dynamic Chassis Control (PDCC) paired with an electronically-controlled rear differential lock. The PDCC system also restricts body roll when cornering through the use of active anti-roll bars front and rear.

To set the GTS further apart from other Panamera models it also gets 19-inch (20-inch are optional) alloy wheels wearing 255/45 tyres on the front and 285/40 tyres on the rear, and a new Porsche Sound Symposer and sports exhaust system. Porsche says the Sound Symposer can detect “intake vibrations between the throttle valve and the air filter, transmitting them as engine sound via a membrane into the A-pillar”.

The Porsche Panamera GTS is set to hit showrooms in Australia in March 2012. Prices start at $315,000. Orders are now being taken.