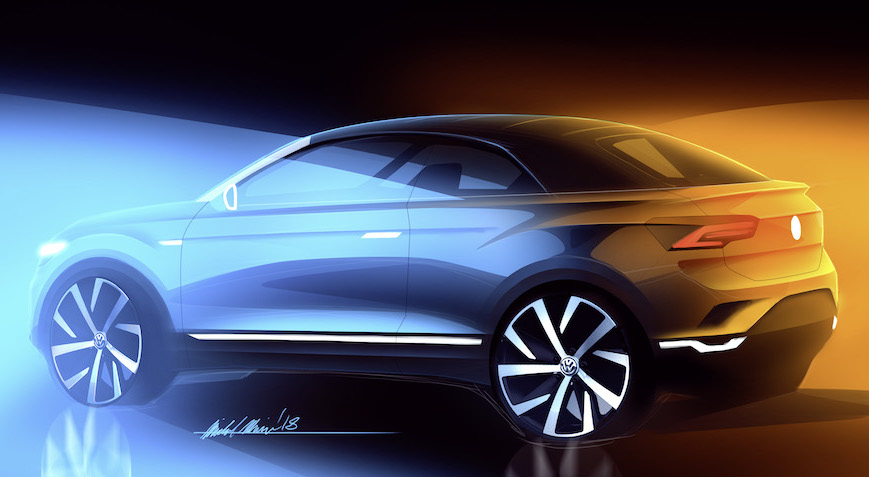 An SUV convertible variant of the Volkswagen T-Roc small SUV will be added to the range in 2020, with a pre-production rendering released as a teaser before its showroom debut.

Based on a concept shown in 2014, the T-Roc differs by featuring a full folding roof mechanism rather than the T-ROC concept‘s targa arrangement. The Volkswagen T-Roc’s Australian launch has been indefinitely pushed back, while the factory caters to unforeseen demand from other markets. Like the MQB-underpinned T-Roc small SUV on which it’s based, the T-Roc Cabriolet is expected to be powered by a combination of turbo petrol three-cylinder and four-cylinder engines, with a diesel option in some markets.

The T-Roc Cabriolet will be manufactured at Volkswagen’s Osnabruck plant, which currently makes the Tiguan and Porsche Cayman. Historically, the Golf Cabriolet has also been assembled here. CEO Herbet Diess said:

“Volkswagen is evolving into an SUV brand. The T-Roc is already setting new standards in the compact SUV segment. With the cabriolet based on the T-Roc, we will be adding a highly emotional model to the range”

The concept of a converitble SUV isn’t new, but very few these days are game to try it. Notable exceptions include the Nissan Murano Cross-Cabriolet and the Range Rover Evoque Convertible.

VW has very ambitious production targets, however, with an €80 million investment to cater for expected sales of 20,000 units annually. Volkswagen plans to field 20 crossover or SUV models worldwide by 2020, accounting for 40 per cent of sales.