You might remember a few weeks ago it was announced that Mick Doohan, Casey Stoner, and David Coulthard would compete in an unconventional race using an F1 car, a V8 Supercar, and a factory road-legal production car. The event has now surfaced online. 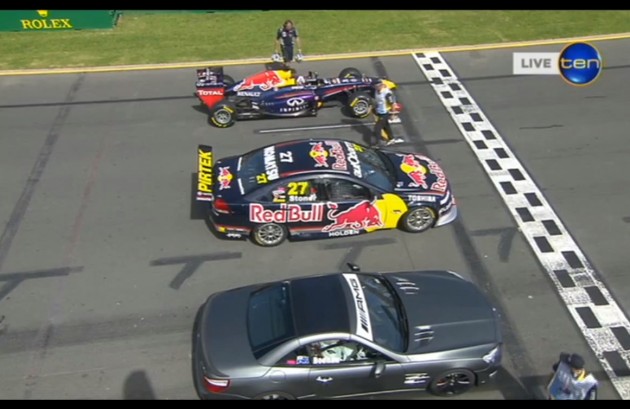 With Casey Stoner behind the wheel of the Red Bull Racing Holden Commodore V8 Supercar, David Coulthard steering a Red Bull Racing F1 car, and Mick Doohan in a factory Mercedes-Benz SL 63 AMG, a number of handicaps had to be put in place to make the race fair of course.

The SL 63 was given a 16.8-second head start over Stoner in the V8 Supercar, while Stoner also gets a head start of 23.9 seconds over Coulthard in the F1 car.

The special event took place at last weekend’s Australian Formula One GP in Melbourne. We won’t spoiler the result on you but it is interesting to see how the cars shape up against each other. Click play below to see how it all unfolded.