Chrysler Group has come up with a bright new special edition called the 2012 Dodge Challenger SRT8 392 Yellow Jacket. The limited model will make its official debut at the 2011 Los Angeles Auto Show next week. 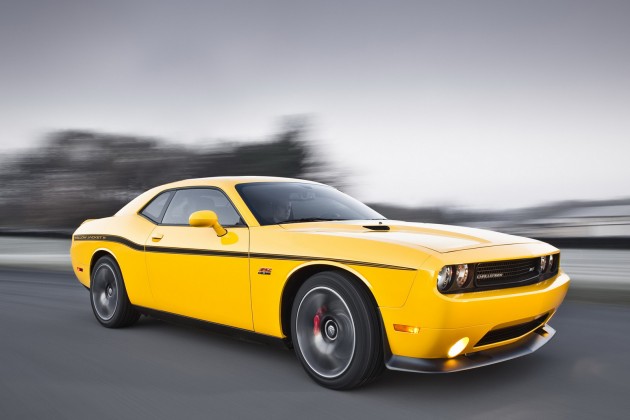 The 2012 Dodge Challenger SRT8 392 Yellow Jacket edition will come with a number of revisions to set it apart from the standard version. There’s a new interior layout with sporty accents throughout, as well as new 20-inch alloy wheels and special ‘Yellow Jacket’ logos.

On the outside, the 2012 Dodge Challenger SRT8 392 Yellow Jacket features a distinctive Sting Yellow paint job with unique black highlights and stripes down the side.

The new model won’t be about carving a new section of the company’s showroom lineup, nor will it be about setting the world on fire with record-breaking performance figures. Instead, the Yellow Jacket will simply be about reconnecting with enthusiasts and maintaining enthusiasm with all the collectors out there.

“The Challenger SRT8 392 Yellow Jacket adds another piece of performance car nostalgia to our rear-drive muscle coupe lineup in 2012. The Stinger Yellow paint and interior accents speak directly to the performance enthusiast who appreciates a memorable and collectible color that helps deliver even more excitement and exclusivity.”

Under the bonnet sits the normal 392 6.4-litre HEMI V8 producing 350kW of power and 640Nm of torque. It’s good for quarter mile times in the mid-12 seconds range.

Chrysler is yet to reveal official production numbers, but it’s understood only a select amount will be made. Stay tuned for more details and coverage from the 2011 Los Angeles Auto Show, starting November 16 (press day), and 18 (public).