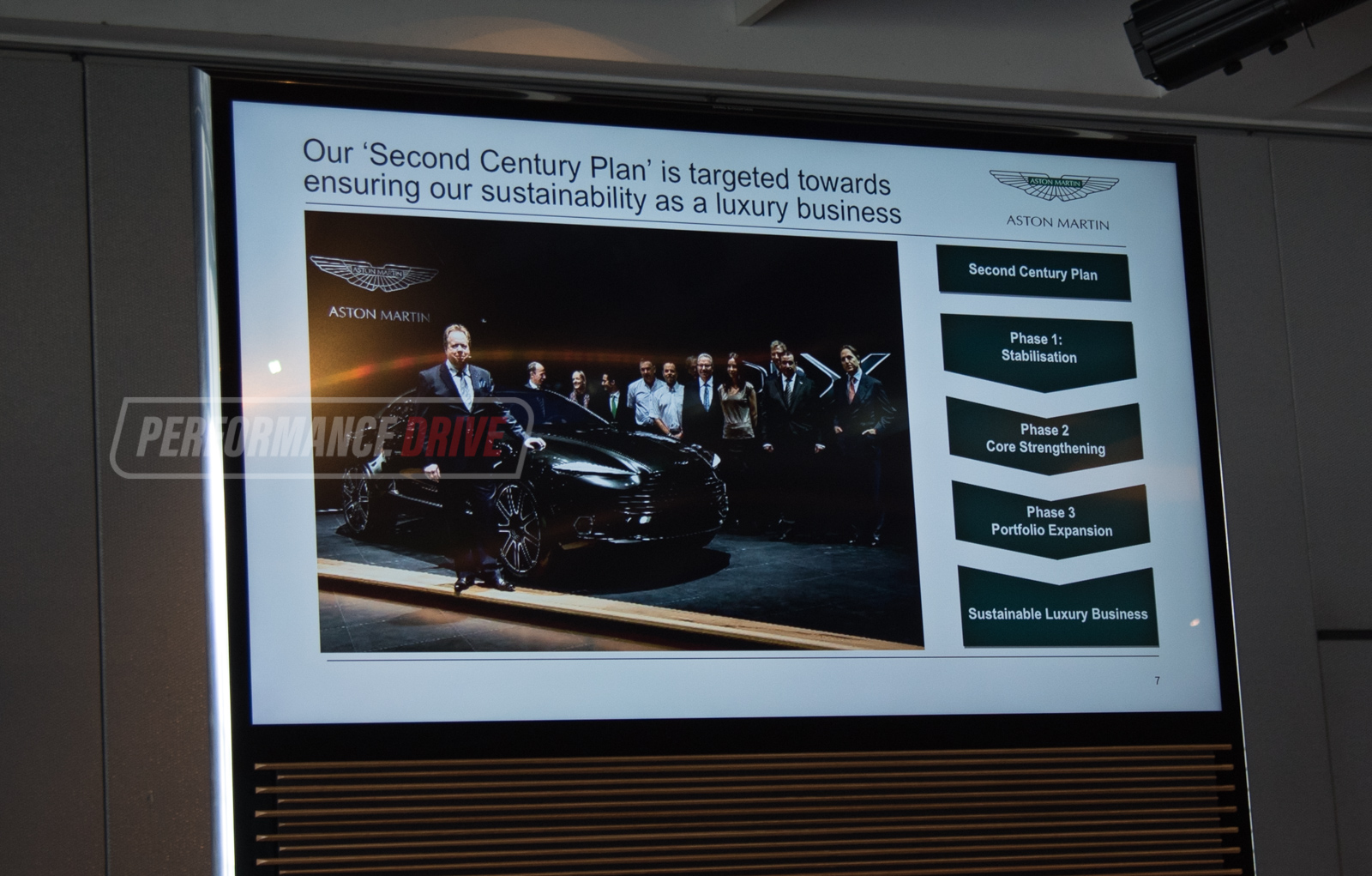 Future business plans for Aston Martin have been confirmed by CEO Dr Andy Palmer during a media event in Sydney yesterday showing the Vantage Red Bull Racing Edition, with the company head revealing details of its six-year ‘second century plan’. 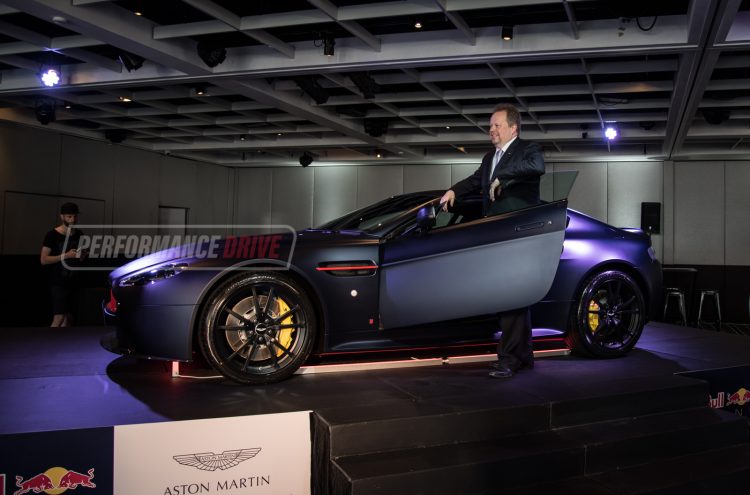 According to statistics, there are 16 million people in the world that are what Aston Martin sums up as High Net Worth Individuals (HNWI). These are people who have at least one million dollars in liquid cash. And this number is growing. In fact, the worldwide luxury market is said to be worth one trillion euros, and the biggest portion is luxury cars.

To maintain a strong presence in this market Aston Martin is implementing a plan it dubs as the second century plan. This is essentially the company’s 104th year operating, as it leads into its second century. Andy Palmer says the idea is to take the brand’s strength and history but close the book on its historical performance from a commercial and business point of view, and turn it into something very valuable.

In total, the company has sold around 80,000 vehicles since its inception, with figures dropping right down in the early years, even at bankruptcy. Production has certainly been ramping up in recent years though, with last year the company producing 3700 cars. Palmer expects that to grow by around 30 per cent this year thanks to the introduction of the DB11, taking the figure to around 5000 units. 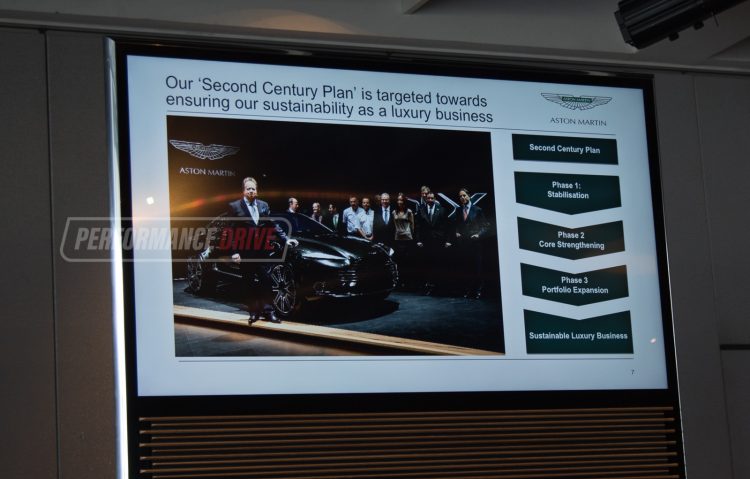 The first portion of the six-year, three-part plan is “stabilisation”. It’s currently at the end of this phase, with the DB11 kicking off the second phase of “core strengthening”. This is perhaps the most exciting part, as Aston Martin will be replacing three sports cars, including the DB11 replacing the DB9.

After these, the company will be looking in the third phase which is “portfolio expansion”. Included in this will be a large SUV to hit the market in 2019, a mid-engined sports car in 2020 as recently confirmed, an all-new Lagonda in 2021, and another Lagonda in 2022. That equates to one car per year, with each car having a seven-year life. Andy Palmer says this process will be repeated and repeated. He said: 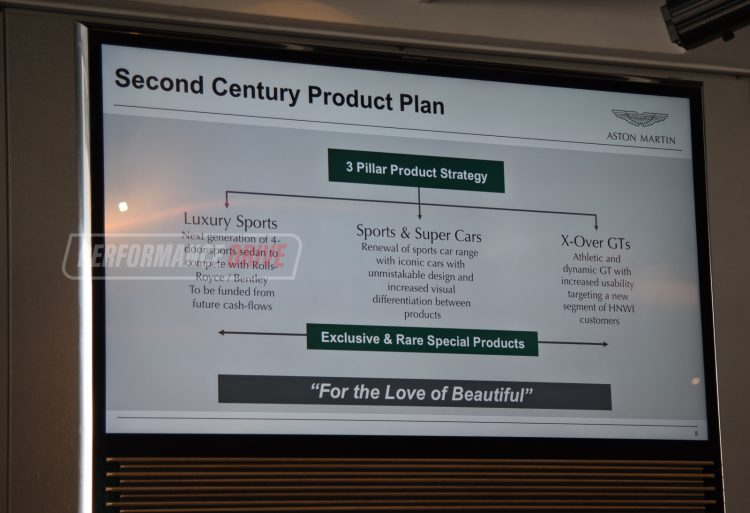 Shareholders have agreed to fund the first four cars to build momentum. The most important will be the launch of the SUV, which will be revealed at the end of 2018, as revealed in our recent report, and will arrive in markets in 2019. The Lagondas will be pitched at Bentley and Rolls-Royce customers, replacing the Rapide.

Aston Martin isn’t going to be going for sheer numbers and sales, like Porsche and perhaps Lamborghini. Instead, it will be going for a philosophy similar to Ferrari by remaining exclusive for customers. “We want to stay very small, bespoke… and exclusive and elusive. By staying in the luxury arena we’re appealing to HNWI,” Palmer said. As such, production for the DB11 for this year has already sold out.

The SUV will be the company’s first model to be built at its new manufacturing facility in Saint Athan, in Wales, followed by the Lagonda sedans. The sill plaque will say ‘Made in Wales’ instead of ‘Made in England’ on these vehicles. All of the future sports cars will continue to be produced at the existing factory in Gaydon, England.

Beyond the new models mentioned, Aston Martin will also be doing two special editions per year and two special customer one-offs. The former being cars such as the upcoming Valkyrie, and the Vulcan track-only machine, both of which are sold out.

The plan for the Valkyrie is to be as quick as a 2016 Formula One car around Silverstone, according to Palmer. This will be a big achievement if it succeeds. You can only imagine the kind of aerodynamic properties and sheer power it will have to possess to be able to beat a super lightweight such as a modern F1 car. It will be capable of 4g lateral force in the corners, which is truly incredible. Prices will start between 2-3 million pounds, depending how customers spec it.