As predicted, Lexus was indeed planning to unveil the all-new Lexus LC 500 super sports car at the Detroit auto show. Excitingly, the new model has already been confirmed for Australia. Clearly inspired by the LF-LC concept car, the new LC is built on a brand new platform called the Global Architecture Luxury (GA-L). Lexus is calling it the most torsionally rigid setup the company has ever made.

Providing propulsion is a 5.0-litre naturally aspirated V8 producing 351kW of power and 530Nm of torque. It’s capable of seeing 0-100km/h in under 4.5 seconds. Part of the speed comes thanks to an all-new 10-speed automatic transmission.

As for the exterior and design? It’s a stunning piece of work. It uses a 2870mm wheelbase with very short front (920mm) and rear (970mm) overhangs for that proper sports car look. There’s also L-shaped daytime running lights, futuristic taillights, triple LED headlights, and a set of 20- or 21-inch forged alloy wheels.

Inside, it’s a similarly spectacular setting, infusing elegance and racing cockpit-like themes, with plenty of luxury touches of course. Lexus says it engineered the driver’s hip point to be as close as possible to the car’s centre of gravity, where feedback from the car is most communicative. Special attention was also spent on where the driver’s eyes focus, with surface shapes helping to “support a driver’s mindset”.

Speaking about the flagship sports coupe, Lexus chief branding officer and Toyota president Akio Toyoda said the LC 500 “epitomises the new spirit of Lexus and will act as a lighthouse model” for its expanding range. Toyoda said:

“A few years ago we decided to guide the future of the brand with products that had more passion and distinction in the luxury market. This flagship luxury coupe’s proportions, stunning design and performance make a strong statement about our brands’ emotional direction, and will grow the Lexus luxury appeal globally.” 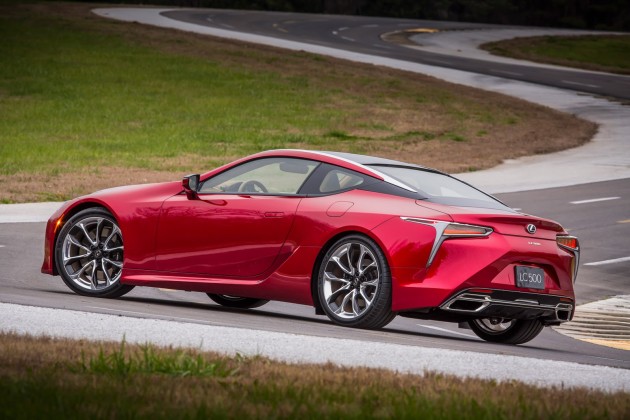 And he means globally. Lexus Australia has confirmed the LC will go on sale locally in 2017. Prices are yet to be announced but we can expect them to be near the top of the showroom range.