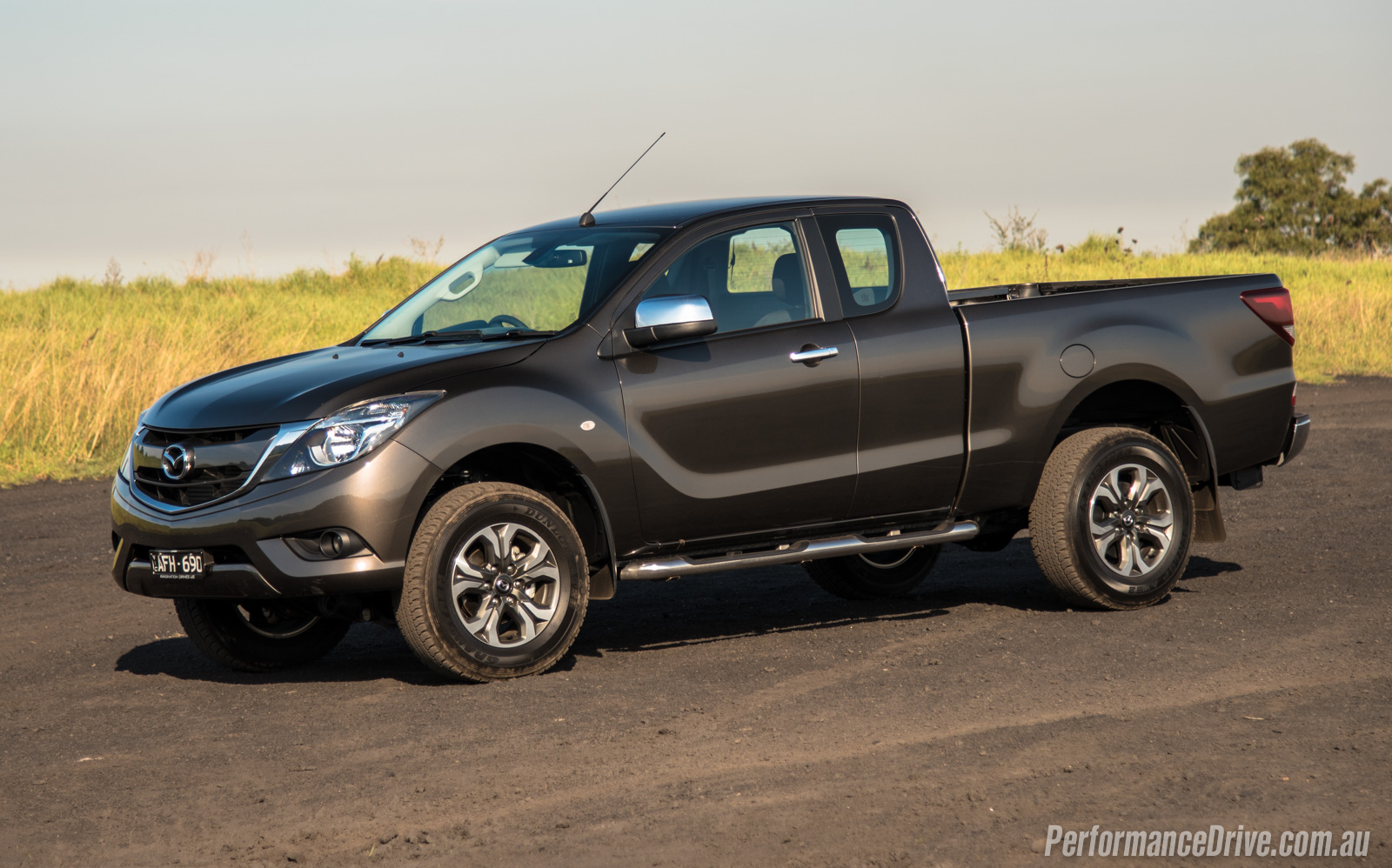 Building on the success of Mazda’s seemingly unstoppable fleet of hatch and SUV favourites, the 2016 BT-50 is ready to take on the extremely vengeful ute segment. 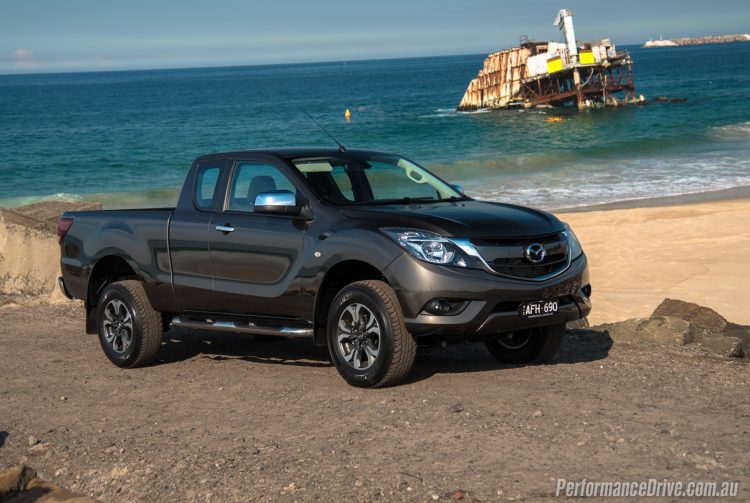 Mazda gave the BT-50 ute a mild facelift late last year, bringing an updated front end look and revised rear end, brought in an improved infotainment system with a rear-view camera standard on the XTR and GT, and added some new alloy wheel designs for some models.

As before, all 4×4 models come with a 3.2-litre turbo-diesel five-cylinder Ford engine, while entry two-wheel drive models get a 2.2 diesel. The 3.2 produces some of the highest output figures in the segment, generating 147kW and 470Nm. It can be had with a six-speed manual or six-speed automatic.

We’re testing the XTR Freestyle 4×4 (extra cab) with the auto transmission. Prices start at $49,675, placing it in the market at the upper end of the extra cab pricing spectrum. 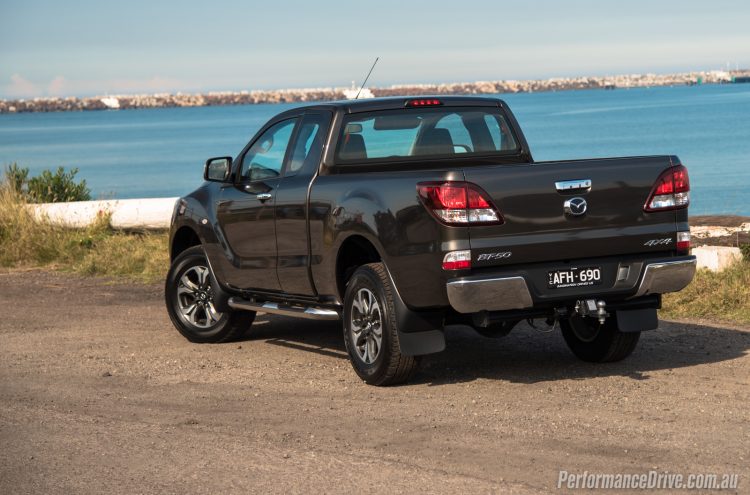 The Mazda BT-50 lineup is one of the simplest in the class in terms of deciphering trim grades. You have the base model tradie-spec XT, and then the surprisingly well-equipped XTR, and the foreman-spec GT at the top with its leather trim and luxury-inspired features. Mazda says the XT accounts for around 55 per cent of sales, followed by the XTR registering 35 per cent. A majority of all buyers go for the automatic with 4×4.

Opting for this mid-spec XTR isn’t as basic as you might expect. Satellite navigation is standard, as is a rear-view camera, auto wipers and headlights, tubular side steps, and a set of 17-inch alloy wheels. Trailer sway control, cruise control, a locking rear differential, and full Bluetooth connectivity remains part of the package too. 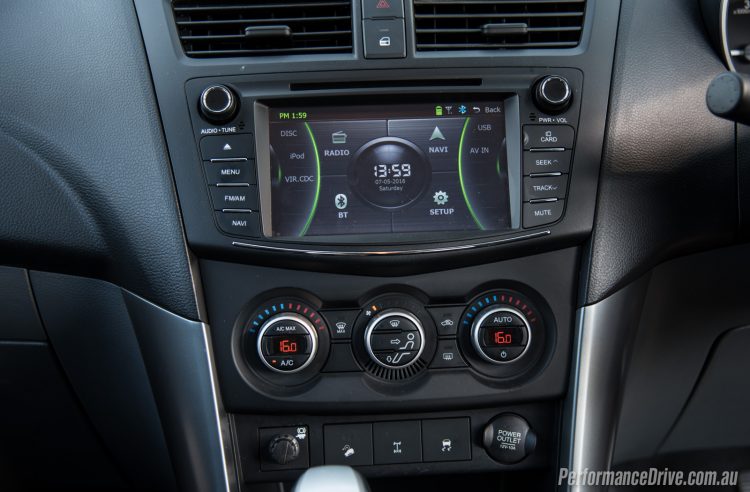 For the dash there is a 7.8-inch LCD interface. Unfortunately, Mazda has decided not to fit one of its superb MZD hand controller systems to the BT-50. Instead, it is offering a very fidgety and overly complex touch-screen system. The in-screen menus and buttons are complicated and not very intuitive in our opinion, and the graphics remind us of the 1990s computer game, Lemmings. In between the speedo and tacho dials there’s an LCD screen that also looks like it uses technology derived from the ’90s.

Most of the dash plastics seem hard-wearing and robust, making it perfect for the vigorous worker, while the seat material also feels strong and resistant to dirt and marks. We’re not a fan of the basic centre console, with its 4WD select knob that is put in place as if it was an afterthought. It looks like there is some wasted space around. All other areas of the cabin are very practical though, with big cup and bottle holders, plenty of storage, a decent-sized centre console box, and big manly buttons for the locking diff and hill descent control, matching the theme of the segment.

Going for the Freestyle cab means you get two rear seats. These are suitable for adults for shorter journeys, and they do appear to be fixed. There are no rear vents though unfortunately, although there is a 12V power socket

As for the tray, it comes with a tubliner as standard on the XTR, along with dual 12V sockets, a soft tonneau cover, and a sealed tailgate. The Freestyle layout presents a very long and wide load area. It measures 1847mm in length (floor), 1560mm in width, and is 513mm deep, with a load height of 841mm (ground to tray floor). Payload is rated at 1144kg, which is one of the highest in the segment for this body style. 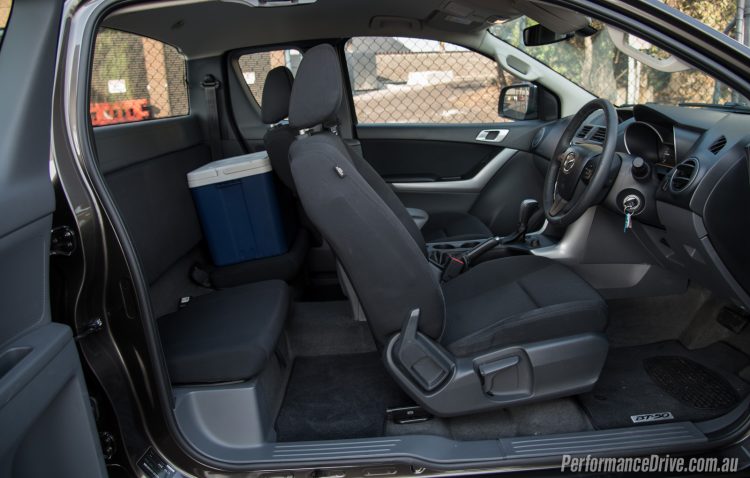 Out on the open road the BT-50 does present a jiggly ride, like all utes, but we would place this as one of the more comfortable offerings. Ute rear ends in particular can feel skittish and uncertain on rough roads, but in the BT-50 it remains reassuringly planted and stable most of the time.

Body roll is kept to an absolute minimum, and you can hook into corners and tight roundabouts without any hesitation or nervousness; it will handle it surprisingly well. Even the big 265/65 tyres can withstand enthusiastic cornering, despite supplying a tall side profile suitable for off-road work.

In terms of the engine performance, it is one of the most powerful units in the class with one of the highest torque figures (147kW and 470Nm). On paper, the powertrain is certainly very impressive and helps to make the BT-50, overall, one of the more attractive propositions.

The 3.2-litre turbo-diesel is an unusual engine though because it incorporates five cylinders. This means it is inherently unbalanced compared with a four or six. Some manufacturers have produced five-cylinder petrol engines in the past, such as Ford and Audi, and these produce a very cool howl as they climb the rev range and smooth out that unbalanced nature.

With this diesel though, you need to build the revs before it balances out and gets into a nice galloping thrum. Since this is a light commercial vehicle, you don’t end up revving the engine. In fact, peak torque is spread from just 1750 to 2500rpm; you don’t need to rev it to experience its performance. What we’re saying is the engine can seem a bit rough until you let the revs build, even though you don’t need to build the revs to access the torque. Peak power comes in at 3000rpm.

There is some turbo-lag, which is to be expected, and overall acceleration is good for the class. We timed 0-100km/h in 10.40 seconds, matching the 140kW twin-turbo Nissan Navara and bettering the 420Nm VW Amarok. Fuel economy is also good for the class, with an official rating of 9.2L/100km. We actually recorded an average of 8.9L/100km during our week with this example. 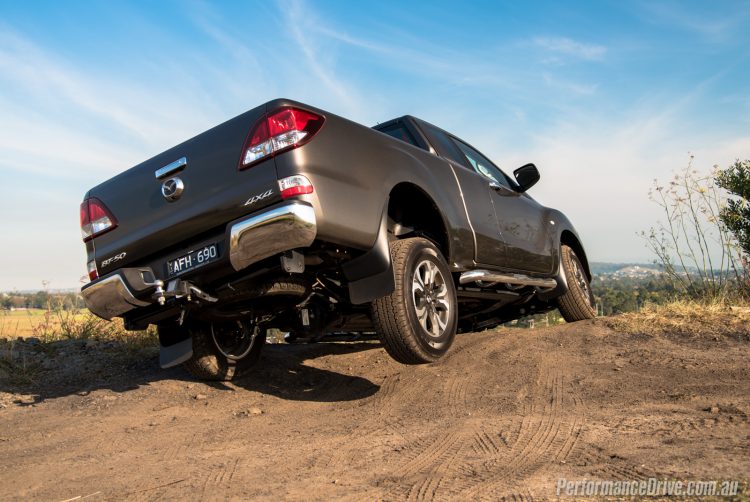 Off the tarmac, the BT-50 XTR is a purpose-built all-terrain machine. Drivers can select between high- and low-range four-wheel drive, and the rear differential lock really helps out when you’re in very sticky situations. We found the open diff (in non-lock mode) to freespin quite early on, but this is quickly solved by selecting 4×4 mode. In XTR form, unladen, you won’t have trouble climbing over sudden mounds or kerbs, as there is a very impressive 237mm of ground clearance. Approach (28.2) and departure (26.4) angles are also commendable for this class, supported by an 800mm water wading depth.

We like the tubular side steps Mazda has gone for with the BT-50. They aren’t exactly aftermarket rock-hoppers or anything serious but we did find them to be more useful and robust than the flimsy aluminium/plastic side steps that some of the rivals come with.

If you’re in the market for a tough workhorse, it’s never been a better time. There are around eight very good options on the market at the moment, and each provide for different buyers types and price ranges, and offer slightly different fundamentals. The BT-50 is one of the front runners, presenting impressive power and performance, high load ratings, decent standard features, and genuine off-road ability. Ticking off as many skills as this though does come at a price, with the BT-50 XTR and GT standing at the pointy end of the pricing hierarchy.