Not content with the power of your measly 5- or 6-litre V8 engine? Perhaps this Nelson Racing Engines 10.4-litre V8 twin turbo with 1400hp item will suffice then. 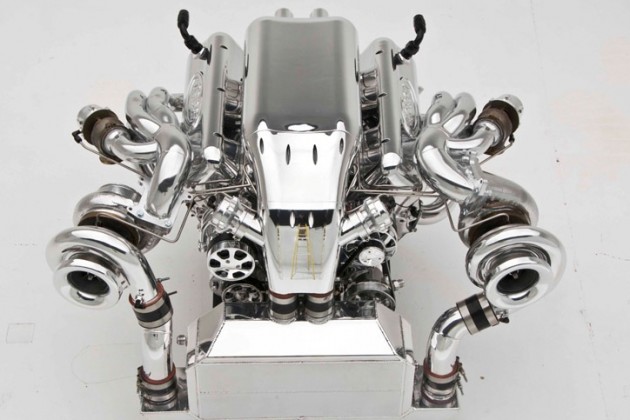 The Nelson Racing Engines 10.4-litre V8 looks like a cross between a raging bull’s head and a giant concoction chrome tubing. In reality, that’s almost what it is.

In amongst it is a twin-turbo system with custom manifolds and piping, as well as a front-mount intercooler with a huge, angry-looking plenum feeding the forced air down into the heads.

It’s intended for serious racing applications, obviously, and develops an eye-popping 1044kW (1400hp) of power and 1896Nm of torque. This is on a normal tune using petrol found at your local servo.

On racing fuel, the Nelson Racing Engines 10.4-litre V8 twin turbo produces a staggering 1715kW (2300hp) of power and 2844Nm of torque. This amount of power is far greater than even the most powerful supercars around; the Bugatti Veyron Super Sport, which has just 1200hp.

The engine is available from Nelson Racing Engines in the US, with prices starting at $52,000 (approximately AU$51,305).