Despite ‘downsizing’ trends, the good old stately-sedan-on-steroids segment is still going strong, with a number of delectable options on offer at the moment. A newcomer, that’s actually a bit of a veteran overseas, is the 2013 Opel Insignia OPC. Think of it as a bit like a European HSV Senator. 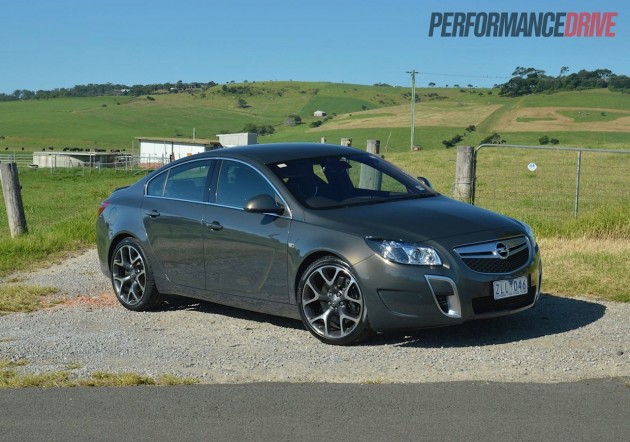 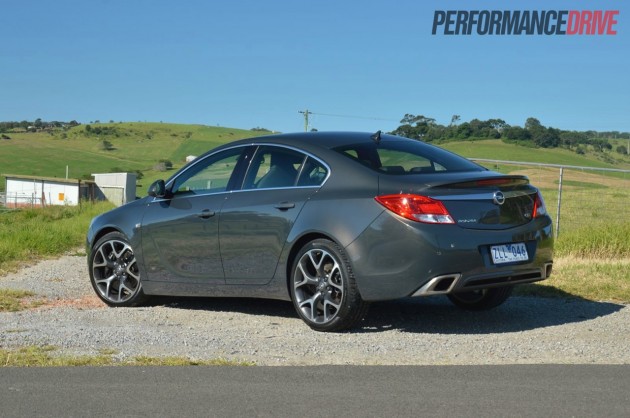 The Opel Insignia and this OPC-tuned (Opel Performance Centre) Insignia are brand new for the Aussie market, with the OPC version launching only a few months ago. They have both been on sale in Europe for a few years now, and they have been well received. The regular Insignia was even voted the 2009 European Car of the Year.

Based on General Motors’s Epsilon II platform, which also underpins the Buick Regal in the US and the Vauxhall Insignia in the UK – and soon-to-be launched Holden Malibu in Australia – the high performance OPC version gets off to a great start by building on strong foundations.

Fortunately, it is a lot more than just a set of big wheels and flared panel extensions. This is a bespoke sports sedan that has been developed on the Nurburgring.

It comes with a fully reworked OPC suspension setup with an advanced ‘HiPerStrut’ front end – evolved from the standard MacPherson struts – and a multilink independent rear end. It also gets stiffer springs and bushes compared with the regular Insignia, shorter front spindle lengths to reduce torque steer, and reductions in kingpin inclination angles to reduce camber loss while cornering. As you can read below, the handling and cornering confidence is truly astounding for this segment. 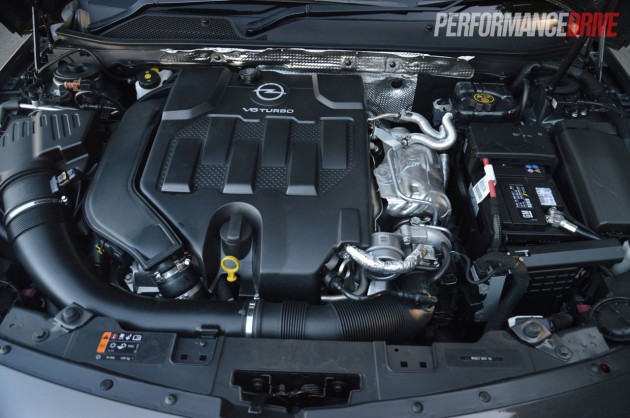 Under the bonnet, OPC engineers have worked their magic there too. It comes with a 2.8-litre single twin-scroll turbocharged and intercooled V6 engine producing 239kW of power at a relatively low 5250rpm, and 435Nm of torque at the same revs.

The highlight, for us anyway, is where and how this power is transformed into forward motion. The Insignia OPC gets a bespoke all-wheel drive system which Opel calls Adaptive 4×4. It includes an ‘eLSD’ rear differential which sends power to the appropriate wheel according to the available traction.

We’ve all heard of this before, where power is sent to the best wheel and so on. But in this, the theory isn’t just technical jargon; this is practical stuff and you can feel it working first-hand. More on the drive below. 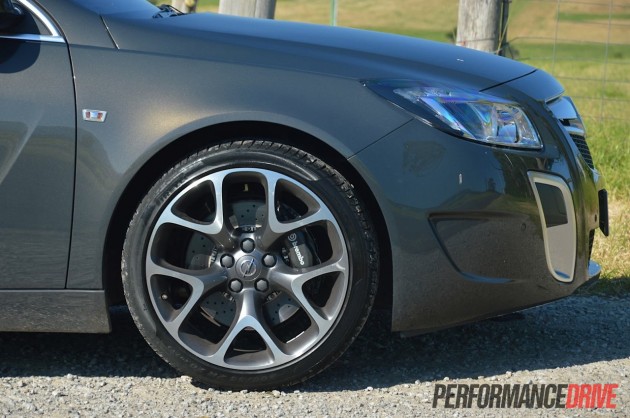 It’s a pretty cool interior that OPC has come up with. There’s chunky Recaro bucket seats that are very supportive, soft, and comfortable, and there’s plenty of room front and back for four to five adult passengers. It feels plenty roomy for this segment, even in the very back, where you’ll find 500 litres of boot space.

It’s actually quite large for a mid-sizer, measuring over two metres wide and almost five metres in length, which means it’s actually wider than a Holden Commodore and only a touch shorter. 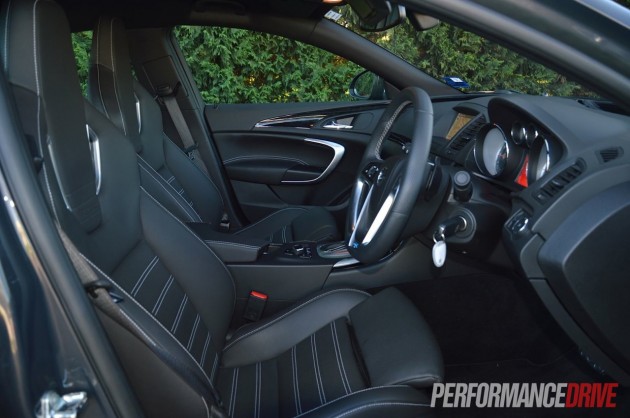 Where the cabin starts to get a bit iffy is with the rather mono-tone grey design, and the needlessly perplexing button layout. On the dash fascia lies a sneezing of buttons, which, upon first inspection, tend to boggle your mind. These take a good going over before anything becomes second nature.

Some menus and options are quite confusing within the interface too, and in general, it seems like everything has been put together by too many people working on dedicated sections; it’s not coherent or all that user-friendly.

It does come packed with technology though. The main LCD screen, controlled via one of two rotary ‘iDrive’-style buttons – on the dash and one on the centre console – comes with satellite navigation, a bunch of media applications, and settings for the driving modes. 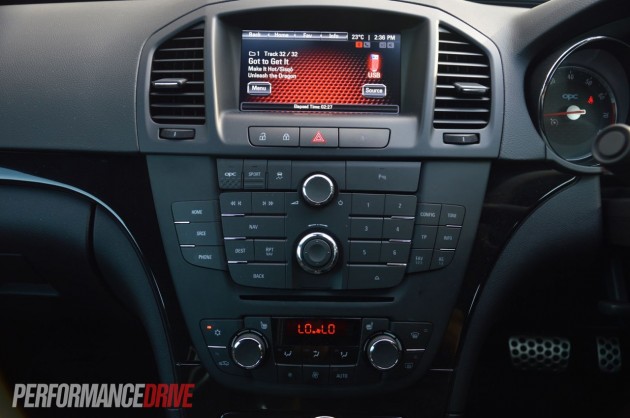 The stereo isn’t the best you’ll come across in this segment. It lacks oomph and you need to turn it right up to get the most out of it. It supports a range of media devices, such as USB, Bluetooth, and, of course, MP3.

You get all of the modern conveniences to help make driving as easy and relaxing as possible too, such as auto headlights with very good corner/pivoting beam functions, auto wipers, one-touch electric windows, dual-zone climate control, and electric seats which, according to Opel, boast one of the industry’s widest adjustment ranges; the height can be adjusted 65mm, with 270mm of sliding action. 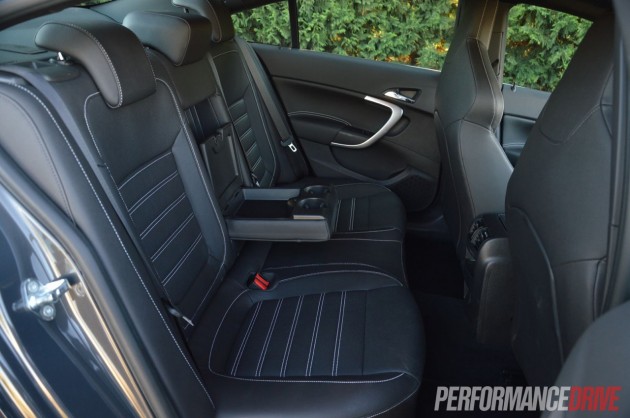 To help distinguish the OPC from the regular Insignia, and to give it a refreshing, sharper, more crisp look, there’s a subtle bodykit with a deeper front bumper bar, a rear lip spoiler, a set of neat side skirts. Various chrome inlays and trimmings are scattered throughout, providing an up-market look.

There’s also a set of optional ($1000) 20-inch alloy wheels on offer, as seen on this test car. These match well with the suspension characteristics and they don’t seem to disrupt the handling behaviour too much like some large wheel options do. For most of the time, when you are driving in traffic and so on, the optional wheels appear in perfect harmony with the body design and the era in which it is themed in.

As for safety, ten airbags will do their best to cushion any impacts that, fingers-crossed, don’t happen, while switchable stability and traction control work very well to reduce the chances of you losing control in the first place. ANCAP hasn’t specifically tested the OPC version, but it has tested the regular Insignia and awarded it the full five stars. It scored 35.16 out of 37 in the most recent tests. 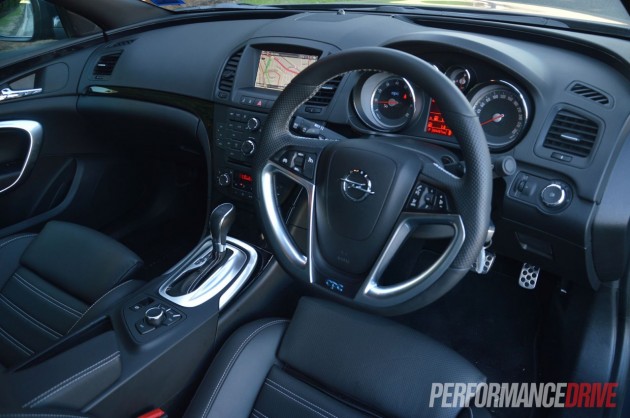 The suspension used on the OPC-fettled Insignia is a clear standout in this segment, and a testament to the work the OPC engineers have put in. It doesn’t bounce or dip going over rough country roads or under braking, and it feels perfectly matched with the weight of the car. It’s not too stiff or too soft. Every now and then a new car just finds that ideal balance. And this is one of them.

As we do with all vehicles that we review, we pushed the Insignia across some demanding roads, including those with smooth sweeping bends, and those with terrible corrugated bumps and quick dips, and not once did the suspension hiccup.

Cars often shudder or literally clunk over a pothole or a sharp road connection when hit with speed. We are genuinely impressed by how well this sedan soaks everything up. For a vehicle that hasn’t been specifically engineered to suit Australia’s often unforgiving conditions, it’s a feat worthy of merited appraisal. 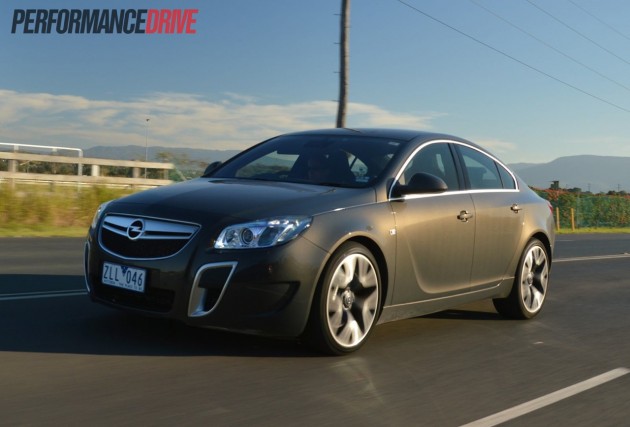 Now that we’ve got the best bit aside, there are a few somewhat negative aspects that you should consider. If you’re interested in buying this car solely because you’re attracted to that turbocharged V6 engine, or at least the idea of it, with its 239kW, you might feel a bit shortchanged. While there is nothing wrong with it in terms of mechanics and operation, it’s more about the expectations and aspirations it gives off. Let us explain.

The V6 fires into life with the rumble and bass of a Porsche 911. It sounds great at idle, especially when it’s cold and when the idle is a little higher than usual. Pat the throttle and you’ll notice, no matter how hard you try to ignore it, a grin will slowly spread across your face, simply influenced by the sheer niceness of the engine thrum.

It revs up quick, again, with the chant and rumble of a very serious engine. It seems like there is a lot going on, and something big has just begun. At this point your senses are in a frenzy. Okay, you’re thinking, let’s get it into gear and give it the beans. 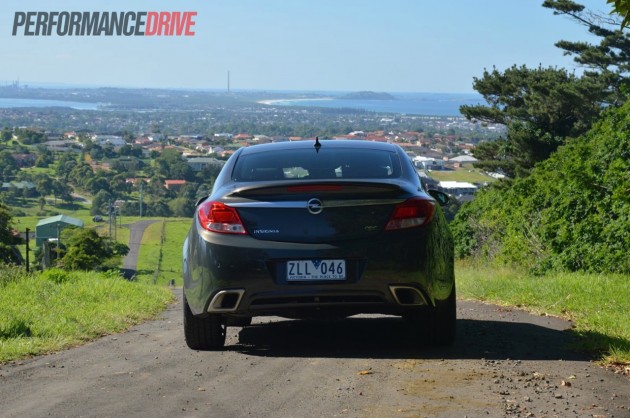 Off the mark there isn’t a big urge of g-force sent through your body, as the initial theatre of it might have led you to believe. Instead, the power and torque delivery is linear and exponential; the more you rev it the more it goes. It’s a bit like a naturally aspirated engine in that respect.

While it might seem conventional on paper, the linear engine character isn’t ideal when it comes to exhilaration, unless you can rev the nether regions out of it. Disappointingly, peak power is reached at just 5250rpm, which means it’s all over by the time most sports cars are just getting started. Some diesel engines can rev this high these days. Come on, OPC, let her hair down and let her sing.

We want turbo-lag. If it means more action and drama, bring it on. The engine, as much as we hate to say it, is a little bit boring. Fortunately, this isn’t a reason to close the cheque book.

With that excellent suspension on board as mentioned earlier, the OPC Insignia has another nifty party trick up its sleeve; handling. You can throw this car into corners like you’re throwing a cat out the window, and it’ll just look at you with a ‘is that all you’ve got’ look in its eye. It’s a superb steer. It’s really solid and sure-footed, and most of all, highly capable and prepared for whatever gets thrown its way. We ended up going over our favourite bit of road, twice, just to enjoy it.

The all-wheel drive system with its eLSD rear diff no doubt provides the grip. And you can feel it working. Not matter how much pressure you (purposely) apply to one inside wheel while corning up an awkwardly tight hairpin, for example, it’s practically impossible to get any sort of wheelspin from this powertrain. That doesn’t mean it’s boring either. It feels accomplished and eager, supporting any decision you make.

Although it doesn’t come with a racy dual-clutch auto transmission, the sports automatic does come with paddle shifters. Gears can be held all the way to redline, and if you prefer to change gear high in the rev range, the exhaust gives off a slight parp to award your enthusiasm.

We did experience some jolting and minor confusion with the gearbox during our test, but this could be due to the test car possibly needing a service (or living a hard life as a result of journalistic abuse).

Overall, it’s a cracking drive. The engine doesn’t feel like a powerhouse, but the way the chassis holds onto the road in the corners and transfers full power to the ground, it is a serious sports sedan worth considering. 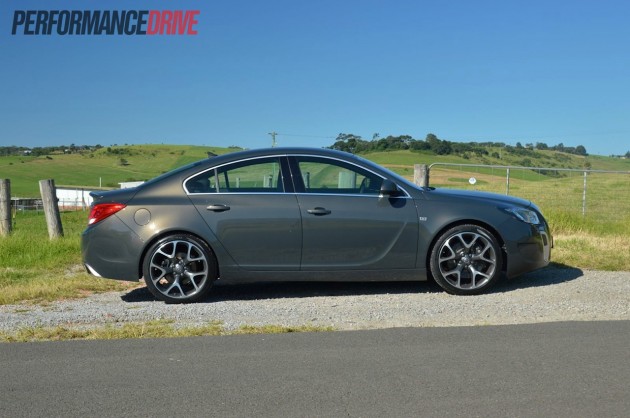 There’s much to like about the Insignia OPC. It sounds beefy, it offers respectable performance for a sports sedan, it’s comfortable and accommodating, and its handling ability is utterly brilliant. It’s also open to some pretty awesome tuning avenues. We could see this thing producing upwards of 300kW with some moderate ECU and boost pressure tweaks; the chassis feels like it could certainly manage it.

Like with all Opel models, and indeed any other foreign brand that is being reinvented or newly introduced into Australia, the main issue we see with this is simply the potential lack of dealer support – limited dealers and therefor limited service centres. Opel Australia says it is planning to open up more outlets throughout the country in the future.

As a product, as a piece of automotive engineering, a tool, we think this is one of the nicest sports sedans and one of the best handling all-wheel drive sedans on the market, in this price segment. If you’re a driving enthusiast, you will appreciate this car a lot. It’s just a shame the engine isn’t as lively or as motivating as the rest of the package. 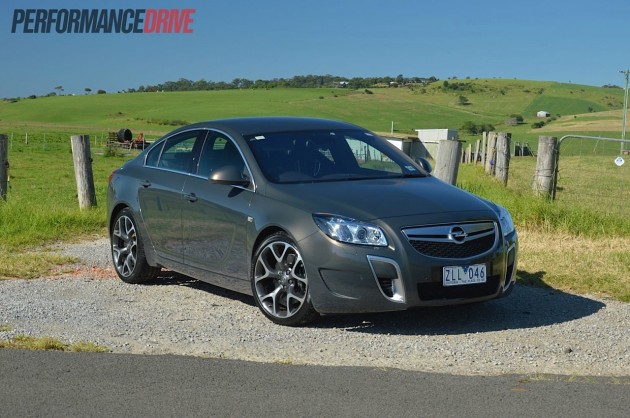 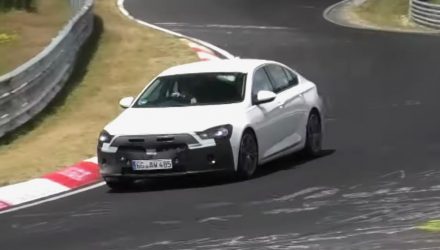 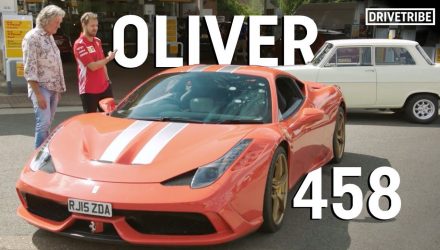