Two Mercedes-Benz test drivers died in a Mercedes-Benz SLR McLaren crash on Monday, after taking a customer’s four-year old SLR for a routine evaluation drive. The crash occurred along a strip of autobahn near Frankfurt. 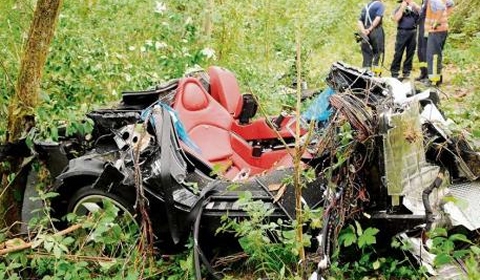 According to a Bild.de report, the drivers were taking the Mercedes-Benz SLR McLaren for a normal highway test at the time of the accident. The report says the two Mercedes-Benz test drivers were travelling through a skinny section of road with an 80km/h speed limit that led onto a wide-open unrestricted autobahn.

Police reports said the SLR McLaren was doing around 300km/h before the driver lost control, sending the SLR into a guard rail. The SLR then catapulted 10 metres into the air and bounced off a series of trees 35 metres down the road, ripping the SLR apart and sending the test drivers free from the cabin. Police spokesman Andrew Beese said,

“The road is a wide open highway without any speed limit. It is eight kilometers long, and has almost no curves.”

One of the rescue workers said,

“They were just way too fast.”

“We are deeply concerned about this serious accident. Our thoughts are to the victims and their families and friends.” 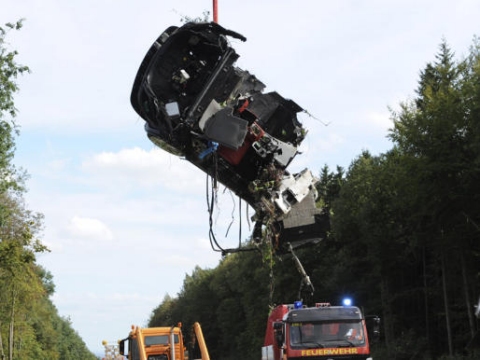 By the look of the images, the Mercedes-Benz SLR McLaren crash was very severe, completely ripping apart the main structure of the body. Both test drivers were killed instantly.