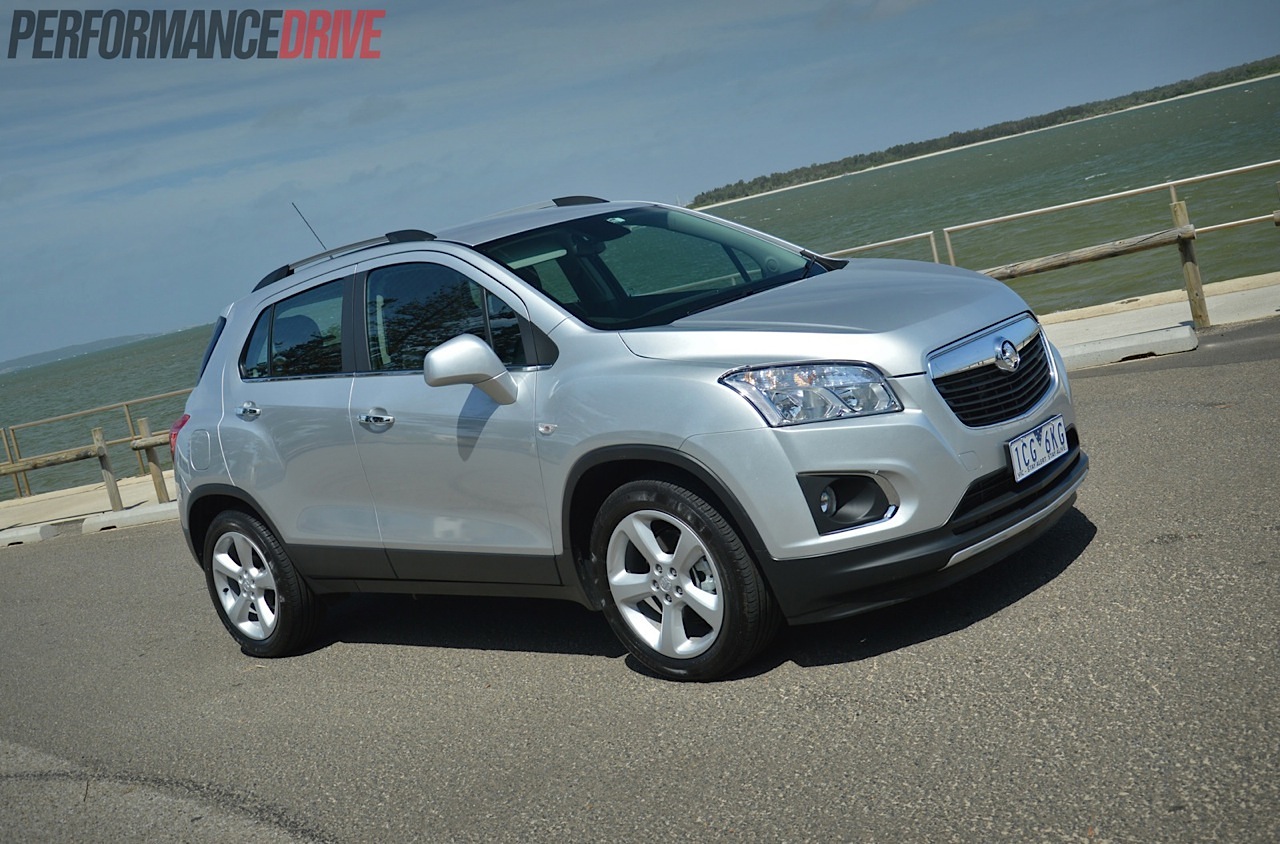 Compact SUVs in recent years have gone the way of the iPhone and espresso martini; they are now seen as cool. They offer up some of the privileges only available in a large SUV, but in something that can be parked with ease, isn’t the size of a tennis court, and doesn’t have a drinking problem. The new Holden Trax LTZ 1.4 packs a heap of features into a small package, but is it worth the $5000-plus premium over the base LS model? 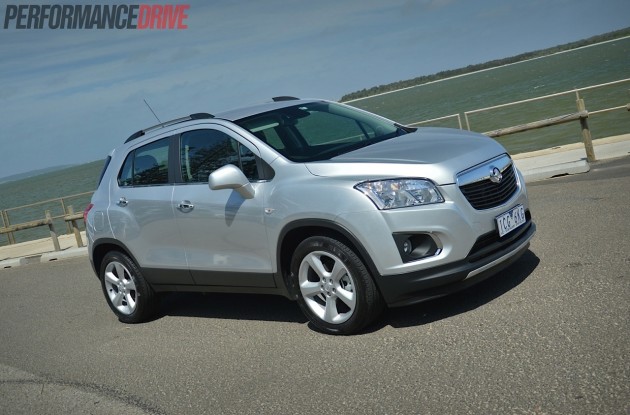 In 2013, Holden entered the compact SUV segment with the Trax LS, competing alongside the likes of Nissan’s new QASHQAI and the Ford EcoSport. In its latest foray into the battle for the hearts and minds of a younger demographic, Holden has released the LTZ 1.4 version.

It comes with a 1.4-litre turbo-petrol engine producing 103kW and 200Nm. Holden boasts that it is one of its most fuel efficient units, offering a combined cycle consumption of 6.9 L/100km. Compared with the 1.8 naturally aspirated engine that powers all other variants, the 1.4T is more efficient (7.6L/100km for the auto 1.8) and it adds 25Nm (same 103kW) . All variants are front-wheel drive, which means this is designed as an urban run-around and not built for any form of off-roading.

Prices for the base model 1.8 LS manual start at $23,990 and top out at $29,990 for the LTZ (auto only). This places it as a cheaper alternative to the slightly larger models in this segment, at least in the case of the LS. 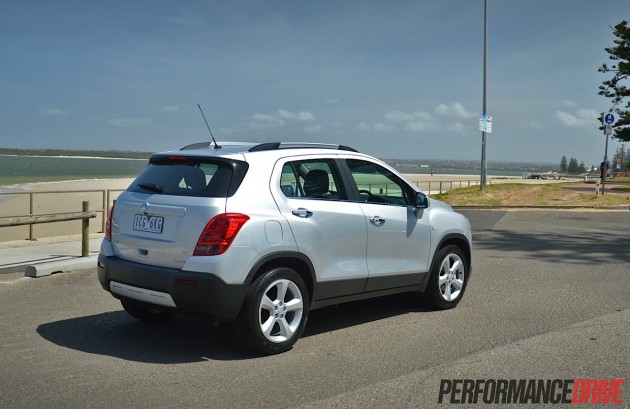 All Trax models come equipped with Holden’s funky ‘MyLink’ seven-inch touch-screen interface, as well as a rear-view camera. The MyLink system is user-friendly and can sync your phone via Bluetooth for calls and music, and it also offers several apps for navigation and internet radio. Holden also boasts its new voice control functionality that does indeed work, with a lot of patience. The sound quality from the six-speaker sound system is great, and iPod connectivity is easy to set up.

From the driver’s perspective, the interior is a pleasant place to sit. The LTZ model offers faux leather for the front and rear seats and steering wheel, which feels cheap, but it is effective especially if you or your kids have a habit of spilling food and drink. The digital odometer and multifunction readout with trip information looks like it is taken from a motorbike and doesn’t do any favours for the initial impressions of the interior quality. For those that have never ridden a motorbike, this will come across as a ‘sporty’ highlight.

Provided the driver and passenger aren’t much taller than six foot, the legroom in the back is decent. The rear seats fold flat too, with storage underneath. The boot is a reasonable size (356L) despite the Trax’s compact proportions. It can be expanded to 785 litres with the seats folded, and offers 1370 litres if you’re happy to pack things to the roof.

Storage space is an area where the Trax excels; we were continuously finding new storage spaces in cubby holes and on the dash during our time with the car. The cargo area easily swallows an entire luggage set required for a weekend getaway, and the folding seats mean more bulky items like surfboards can fit into the Trax with no problem, furthering the appeal of the Trax with a younger demographic.

In terms of exterior styling, the LTZ model comes with 18-inch alloys as standard, an upgrade from the 16-inch alloys that come on the LS model, giving the little Trax a more substantial road presence. These are wrapped in 215/55 tyres more suited to road use rather than off the bitumen. 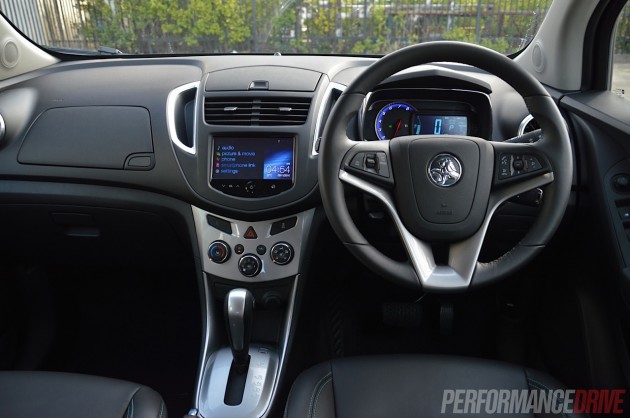 One of the more surprising aspects to driving the Trax is the responsive and perky 1.4 turbocharged engine, and how it can make a mundane drive a lot more enjoyable than the size and style of this vehicle would suggest. Peak torque of 200Nm comes in at just 1850rpm, so off the mark acceleration is quite zippy and responsive. There is some definite turbo-lag in the initial stages of the rev range though, with lumps of torque coming in and out.

Power is transferred to the front wheels at all times, so don’t be fooled into thinking this is an off-roader. The proportions and appearing as a junior SUV might trick you into thinking otherwise as well. In reality, the Trax is simply too low at the front for any semi-decent off-roading.

Out in the bends the Trax shows some body roll. The steering feels snappy and somewhat fun and active, but it can cause the body roll to be more evident. Grip levels are high though and it is capable of cornering confidently with speed, even with an old-school beam-type rear suspension layout. The lack of sheer engineering applied to the underbody can be heard via high road noise in the cabin.

Parking the Trax will be relatively easy for most drivers, but the initial turn-in point is difficult to judge due to the protruding blind spots. Fortunately, the rear-view camera has a radar feature which ensures the driver’s eardrums will explode before reversing into a car or object behind. The addition of a rear-view camera can be interpreted as a bonus but we think it is essential for the Trax as the rear and side visibility is not that great to begin with.

One problem we repeatedly picked up on during our drive was with the transmission; it seemed a little temperamental when driving up hills. The transmission prefers to stay in gear instead of kicking down. It tries to accelerate, even with the revs below 1500rpm. With some more accelerator input the transmission soon kicks down a gear, hurting the fuel economy. As a whole the transmission is solid and changes are made relatively smoothly and quickly. Holden also offers the driver the ability to change gears on the gear knob via plus and minus buttons, but this feature proved to be unresponsive and unnecessary on our occasion.

Government standards claim the Trax’s average fuel consumption is 6.9L/100km, but in our time with the 1.4 the figure was more around the 8.0-8.5 L/100km mark. With a super-light right foot we’re sure you could get the figure closer to the official claim. Holden recommends premium fuel for the 1.4 turbo, a point for younger and economy-focused buyers to consider. 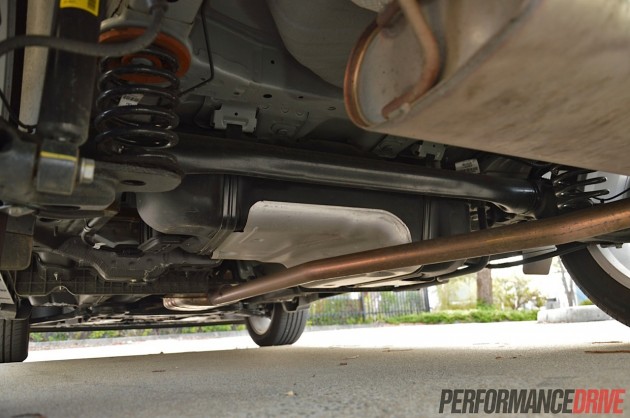 With the LTZ, Holden has added some bells and whistles to an already-worthy proposition. The new turbo engine will get the nod from drivers looking for a little bit more excitement from their small SUV, while some will enjoy the premium-like interior gadgets. At city speeds and in urban conditions the Trax is a friendly drive, and it’s a comfortable place to be sitting in traffic.

In terms of the competition, the Trax can hold its head up high, combining the practicalities that one would expect from a compact SUV with a perky engine that will entertain the everyday driver. At near enough to $30k the LTZ model takes the Trax very close to a new set of slightly larger and more capable competitors just above the $30,000 mark. For some buyers, the upgrades to the engine and interior of the LTZ will be enough to justify the premium over the base model, but we’re not so convinced. The entry LS is the better value option if all you want is a cheap and cheerful compact softroader.

CONS:
– Front end is too low
– LTZ model a little pricey
– Some cheap interior trim
– Transmission is a little dim-witted when it comes to hills 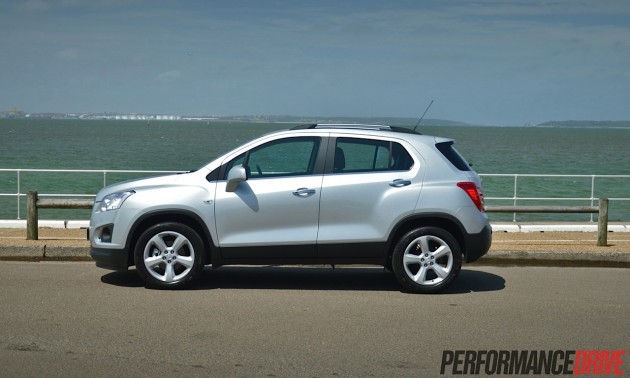