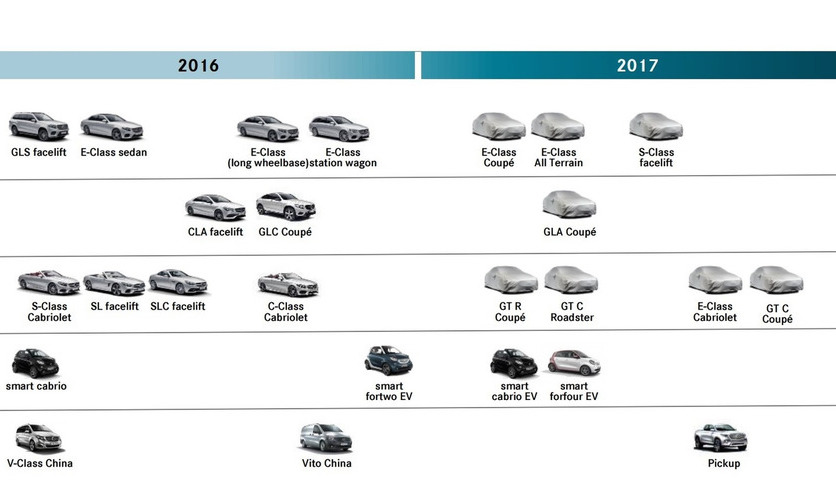 Mercedes-Benz has very sneakily confirmed some long-awaited models deep in its half-yearly sales presentation; the GLA Coupe, the GT roadster, and the ‘GLT’ ute. 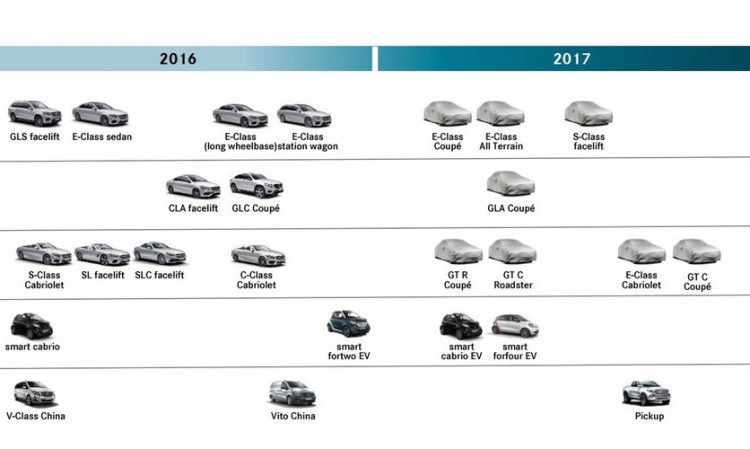 While the emphasis of the document was on Daimler’s strong sales in the first half of 2016, many of the media went straight to Mercedes’s product timeline and caught a surprise glimpse for the two models.

Moving from 2016 into 2017, we can see that the GLA Coupe and ‘Pickup’ are set to debut in 2017, along with a fully electric version of the Smart forfour.

The GLA Coupe remains hidden on the release, but imagine a smaller version of Mercedes’ smallest crossover SUV offering in the fashionable four-door coupe shape.

In addition, we can see the E-Class coupe, E-Class All-Terrain, and a facelifted S-Class are on the way, as well as two smart car variants, and cabriolet and R-variants for the AMG GT.

More significantly for Australian buyers, Mercedes’s long awaited foray into the world of utes has been given a timeline. It’s set to benefit from the current Nissan Navara NP300’s rugged platform and some componentry.

While Mercedes bills it only as a “Pickup”, it is expected to receive a ‘GLT’ moniker.

The GLT was spotted testing a month ago wearing the headlights and front grille of a Navara NP300, but it is said the Mercedes version will have a wider track to separate it from the Navara and future Renault models that also share the platform.

Key markets for the Merc ute will be Australia, South Africa and Latin America, but there is also plans for a European release. It’s not expected to break any records in North America however, where the hegemonic marques of Chevrolet, Ford have stamped-out their fan’s loyalty.