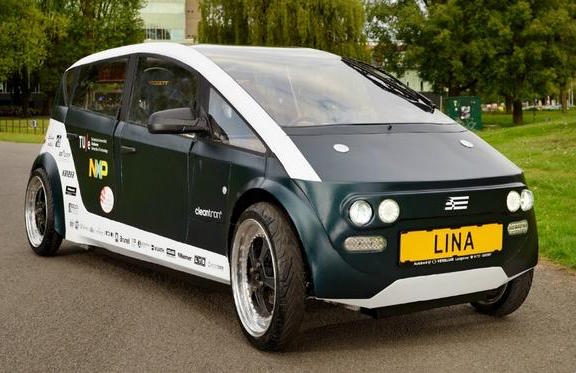 A bunch of uni students in the Netherlands have developed the world’s first biodegradable car, sort of. It shows us that cars needn’t be so heavily-ladened with metal, and also shows us the possibilities in the world of alternative construction methods.

Created at the Eindhoven University of Technology, the eco-friendly car features a honeycomb structure that’s made from resin which is mostly made up of sugar and sheets of flax-based composite, with flax-based body panels. Sounds tasty. You might think twice about taking a car-sized bite of this sweet sandwich though, as the suspension components are still made from metals.

According to the students, the structure, which has been named Lina, offers a similar strength-to-weight ratio of fibreglass. It weights around 300kg in this application. However, when it comes to crash testing the team says it might not shape up so well as Lina doesn’t really bend, but instead snap, like a multigrain biscuit.

Power comes from an electric drive system, while the cabin is capable of carrying four people. The Netherlands Vehicle Authority has checked it over and given it the green light for roadworthiness, which means the students can technically drive the carb-loaded car around on public roads.

Although there are no known plans for any major manufacturer to utilise the construction technology for production cars, it at least gives us an indication of the appetising potential of future mobility.