BMW has the 1 M Coupe, Audi has the RS 3, and so what does Mercedes-Benz have? The upcoming 2012 Mercedes-Benz A25 AMG. Well, not yet, but potentially some time in the next two years. 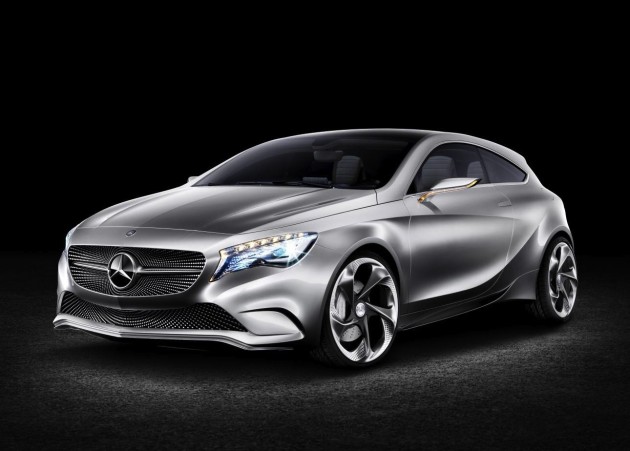 That’s right, Mercedes-Benz and AMG are about to step into the ring with the more serious hot hatches around, and will introduce an AMG version of the upcoming A-Class.

The normal 2012 Mercedes-Benz A-Class itself is set to be a sporty little thing. Certainly more sporty than the previous generations. It will feature a lower profile body, showcasing a fatter stance and a more sit-in rather than sit-on driving position. Styling is set to take on similar proportions as the Mercedes-Benz Concept A-Class (pictured), which will be a welcome change too.

Built on the company’s new MFA (Mercedes Front-drive Architecture), the platform is also said to be ready for an all-wheel drive system. But even in base-model guise, the new A-Class is promising to be a more fitting package to rival the Volkswagen Golf than the previous generations (which kind of gave off a compact-MPV character).

According to a CAR magazine report in the UK, the Mercedes-Benz A25 AMG will be powered by an all-new 2.0-litre twin-scroll turbocharged four-cylinder engine producing a proper back-whacking 250kW – in the direct firing line of 1 M (250kW) and Audi RS 3 (250kW).

Keeping all that power in check will apparently be Mercedes-Benz’s 4Matic all-wheel drive system using a Haldex viscous coupling for the front differential. Acceleration from 0-100km/h is expected to be at least in the 5.0-seconds range.

Exciting times ahead for Mercedes-Benz and AMG then. This will be the companies’ most powerful, quickest, and fastest compact model they have ever produced, and AMG’s first-ever attempt at the segment.

No official word has been mentioned yet on timing. The normal 2012 Mercedes-Benz A-Class is set to be unveiled this year, and will go on sale in Australia in 2013. The AMG version will likely follow some time afterwards.