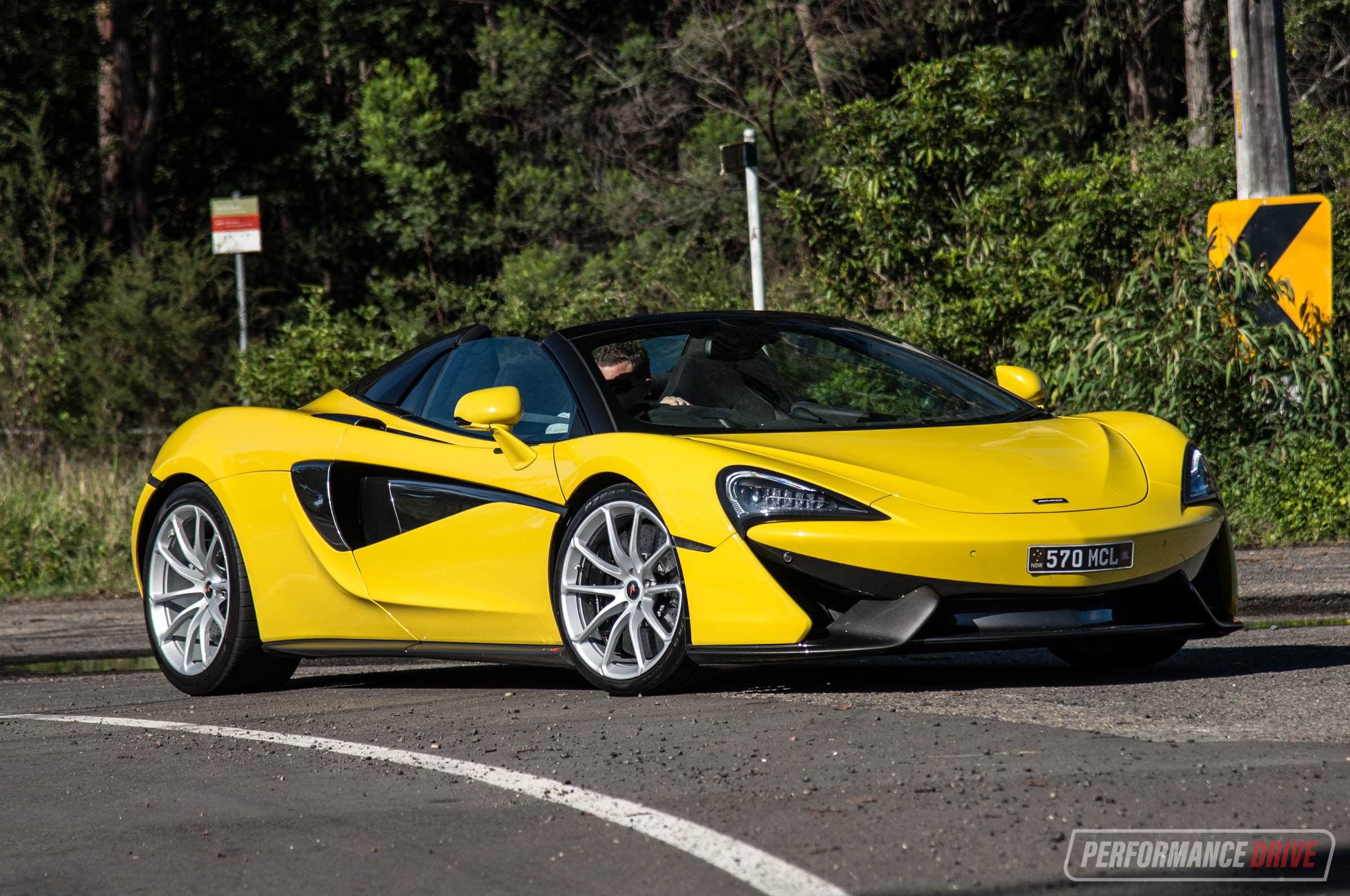 It doesn’t matter where you want to sit in the hierarchy of supercar speed, McLaren offers the full spectrum. From very fast, insanely fast, to downright frightening. At the top end of the very fast section is the McLaren 570S. And to add more thrills, it’s available in drop-top Spider form. 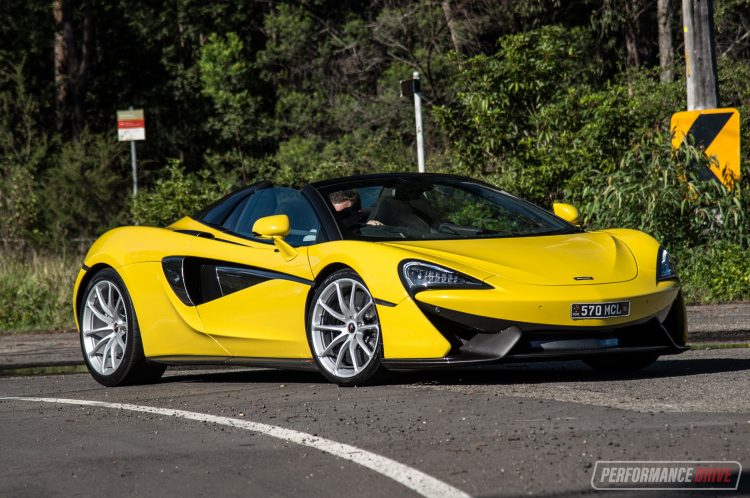 The 570S Spider sits at the top of what’s called the Sports Series range in McLaren’s ever-expanding showroom, under the Super Series and Ultimate Series. It’s the most affordable open-top model McLaren offers, and one of the fastest convertible production cars you can buy in Australia right now – roof-down top speed of 315km/h (328km/h with it up). 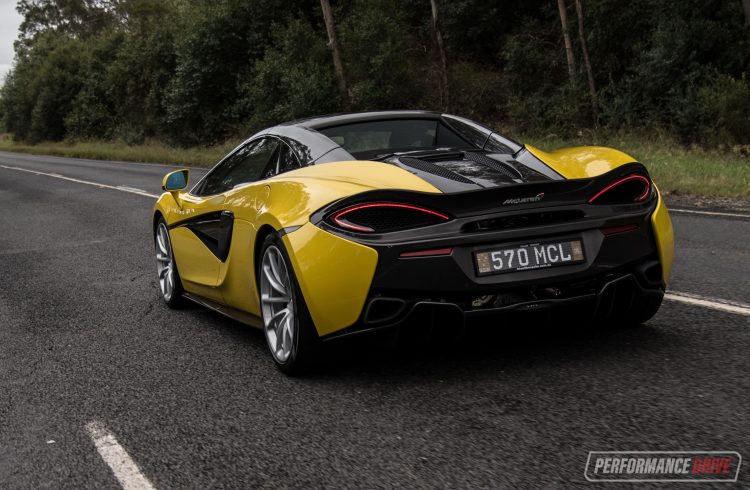 Yes, the 570S does look very similar to the 540C. Actually, it shares the exact same external dimensions and uses the same full carbon fibre tub. It also uses the same 3.8-litre twin-turbo ‘M838TE’ V8 engine, albeit in a slightly different tune, and the same seven-speed dual-clutch transmission. Most of the interior is identical, too. In fact, just 6kg worth of things separate the 540C coupe and 570S coupe.

However, going for the 570S does gain you access to some more desirable features and knee-weakening McLaren Special Operations options. Bragging rights is also something worth its weight in gold at this end of the market; imagine turning up to your next board meeting and telling the guy with the 570S that you have a 540C. Awwkward. 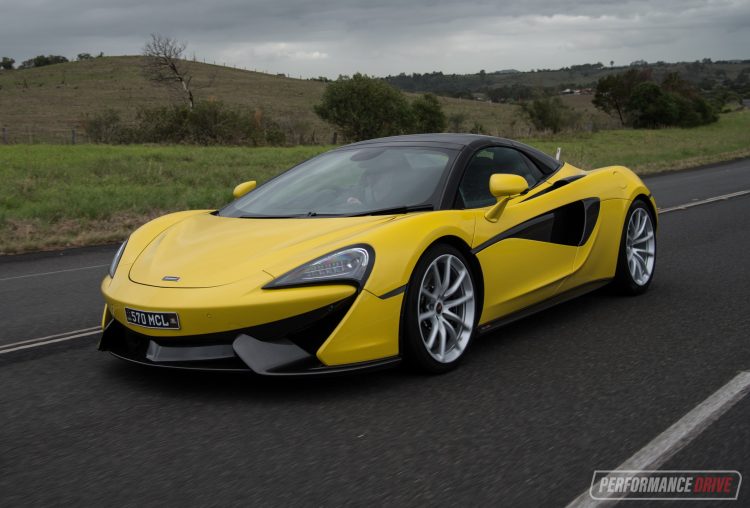 The 570S Spider is a different beast, though. Being able to drop the roof is something very much associated with the elite. McLaren has engineered this car to epic proportions to ensure it lives up to the brand’s reputation for speed and precision. Normally, convertibles are much heavier than their coupe brothers. Not here. The Spider weighs only 46kg more than the coupe, and this is all to down to making sure it’s still stiff and solid; to the point where McLaren says the structural rigidity is “unchanged” from the coupe.

It looks just like a coupe from the outside, with the roof up. There’s a full hard-top split and folding roof that is controlled at the touch of a button, with a power rear windscreen which can be opened and closed regardless of the roof position, to let in engine noise or keep it out. Folding down the roof can be achieved on the go, at up to 40km/h, and it takes around 15 seconds to go up or down. 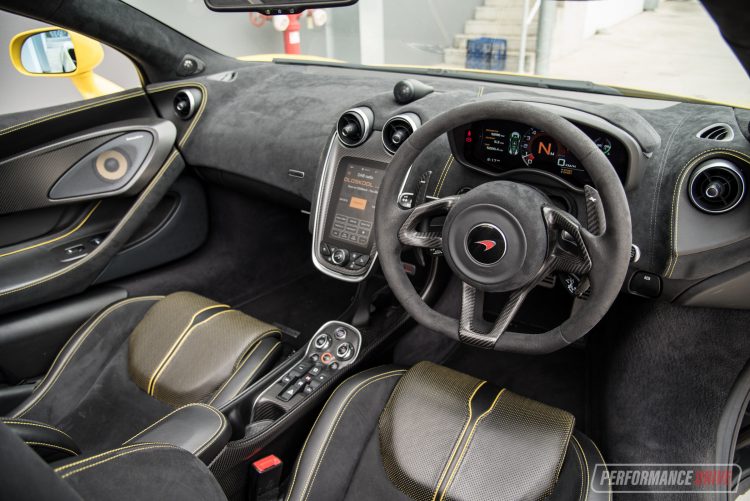 So, how about that interior. Well, it’s definitely a supercar in that it’s pretty bare. Unless it contributes to the driving experience or performance, it isn’t included. The dash is minimal and pushed right up to the base of the windscreen, making it feel like you’re wearing the car like a pair of spectacles. From the centre a stalactite of dash spears down and houses a carbon-surrounded 7.0-inch touch-screen system that McLaren calls IRIS. IRIS is a basic chap, with mostly black and white graphics and lots of blank screen space. Down below you have a couple of shallow cup holders – don’t worry, you don’t need coffee to wake up driving this car – and a narrow centre console box to protect your valuables from prying eyes.

Speaking of sneaky cubby holes, McLaren’s interior designers have come up with a crafty little cove within the thick door trim. You wouldn’t know it’s there. Opening it requires fondling the upper edge of the deepest backboard of the trim. But if you do need to hide anything, like, say, a sachet of sherbet, this is the perfect spot for it.

Other than that the cabin is fairly straight-forward. The driver gets a fully digital and somewhat customisable 10-inch TFT instrument cluster, with a pair of driving mode toggles near the gear selector pad, and a set of race car pedals on the floor. Adjusting the electric seats can be a pain, in the hand, actually, as you need to blindly feel around for the buttons. For some reason the buttons are mounted down the inside of the seats, near that blackhole known as the space between the seat and the centre console. Why this couldn’t be relocated to the outer side is beyond us. It is easy to find a natural driving position though, once you master the controls, with perfect steering wheel and pedal placement, especially for those who like left-foot braking. 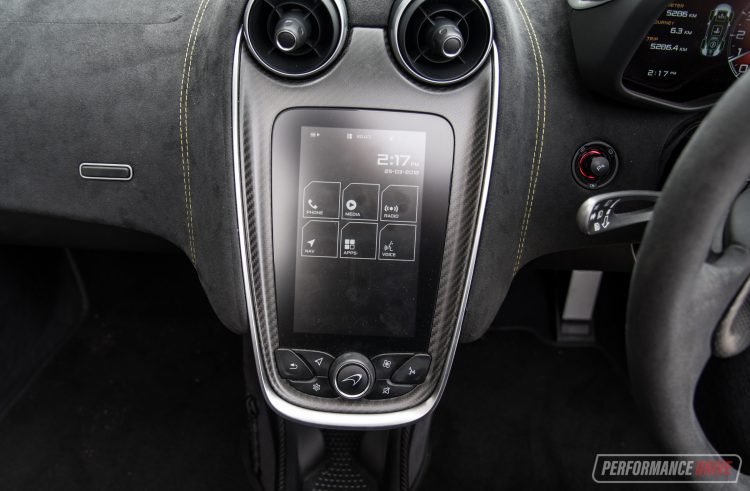 Sitting in the very low cockpit with the window sill at about jaw level, it’s difficult not to feel butterflies in your gut when you first start the 570S. The starter motor churns away for a second or two before the V8 abruptly bellows into life. It’s a lot of commotion from the engine bay until it eventually settles down to a high-tempo purr.

Now, there are a number of driving modes to select from before you get started. If you don’t touch anything you’ll get the default mode. This gives you a regular throttle response and steering feel, and smooth gear changes. The suspension is also surprisingly absorbent, providing excellent ride comfort for a sports car, let alone a supercar. McLaren implements a double-wishbone configuration front and rear, like on an F1 car, with steel springs and twin-valve adaptive dampers. We don’t know how it maintains such compliance on the road, but it is one area you should note down as a big positive if comfort is high in your supercar buying criteria. 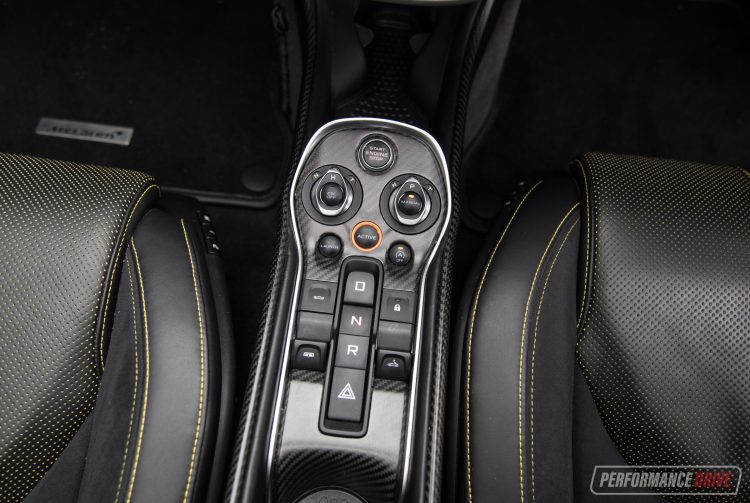 Before you can access any of the modes, of which there are Normal, Sport, and Track for the suspension and powertrain, you need to hit the ‘Active’ button. This is a great little setup as you can leave the manual switches in Sport or Track, for example, and then when the car is started again you only need to hit the Active button to activate them. You can mix and match as well, and have Track for the engine and Normal for the suspension, for example.

Out on your favourite road the 570S Spider is as flat and roll-free as Emily Ratajkowski’s stomach. Match that with the bump-catching suspension and you’re left with a surprisingly agile and playful machine, even in cross country conditions. Handling and grip is phenomenal. The 285/35 rear tyres grab the ground and hold on for far longer than most would dare push it, and getting the power down is no problem at all; you can nail the throttle in second gear around a tight bend, with the traction control off, and it won’t budge. Instead, it propels you as quickly as the revs rise.

The steering feel is beautiful. It feels mechanical and precise, with the kind of feedback you get from a well-sorted go-kart. You just want to keep making turns for the fun of it. Normally cars like this can be intimidating to thread through a series of nice bends. But not this one. It’s like playing with a toy. An extensively engineered and very fast toy, but still a toy that you want to discover and enjoy nonetheless. And with the roof down, you can forget anything you may know about drop-tops losing their rigidity; you’d need to be a robot to notice any potential, presumably microscopic flex. 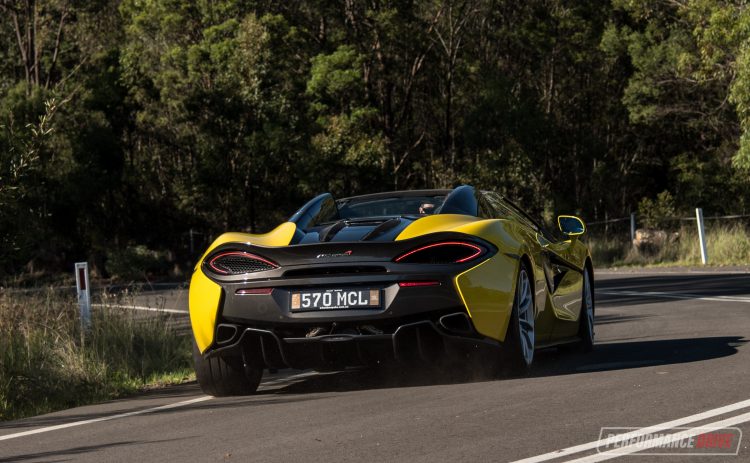 In between the corners the V8 engine is mind-blowingly powerful. There is some turbo-lag down low, with peak torque of 600Nm not reached until 5000rpm. It’ll rev to 8500rpm but you only need 7500rpm to experience the full 419kW. Keep it high in the revs and it’ll smash through gears like smashing through the sound barrier. It pulls so freaking hard. It’s insane. We clocked 0-100km/h in 3.25 seconds using the standard launch control system, with the quarter mile coming up in an incredible 10.99 seconds. Yep, it’s a factory 10-second car. Although low-down acceleration isn’t all that strong for a supercar, the top-end power and continuously climbing momentum is ridiculous.

Unfortunately, the engine doesn’t offer the crystal-shattering serenade of a Ferrari or the full-lunged violence of a Lamborghini. Instead, it groans and moans its way up most of the rev range, with some hints of a superbike burble down low and a throaty, Honda-like roar up top. There is a faint turbo whistle and wastegate chuff if you listen closely, especially with the rear windscreen down.

The McLaren 570S is for enthusiasts who appreciate engineering that’s primarily focused on driving capability and speed. It doesn’t have the outrageous looks of a Lamborghini or the complexity and delicacy of a Ferrari. Instead, it earns big respect by being a maverick and paving its own path, and being very good at it.

As for the Spider version, it is literally the most accessible drop-top McLaren on offer. If it were our money we’d go for the more affordable 540C coupe (not that we can afford it in the first place) as it offers very similar thrills and capability, and it looks the same. If you want the added excitement of a drop-top then obviously it has to be 570S Spider.

PROS:
– Best ride comfort of any supercar (and even some sports cars)
– Immense speed and top-end power
– Pure and mechanical-feel steering
– Loads of grip and g-force in the corners
– Light weight; Spider only 46kg more than coupe