Lotus is normally only ever associated with very lightweight sports cars, but the company has just unveiled the new Lotus Evora GTE at the 2011 IAA Frankfurt Motor Show. This is the company’s most powerful sports car ever produced. 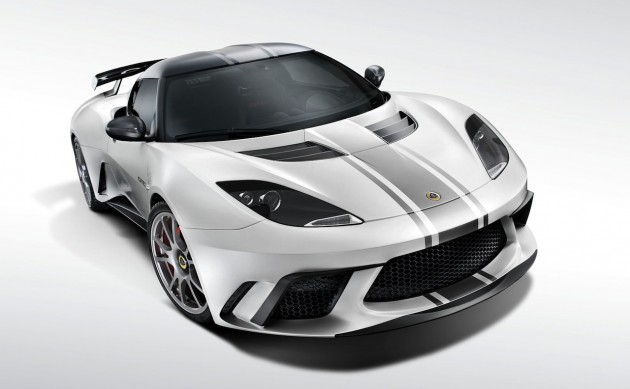 The new Lotus Evora GTE, as previously reported, shares much of its personality and character with the Lotus GTE race car. It offers an aggressive new look including various aerodynamic enhancements, as well as a raft of performance-oriented hardware revisions.

Power comes from a 3.5-litre supercharged V6 engine outputting around 330kW of power. The Toyota engine is then backed up to an automated paddle-shift racing transmission.

Other racing-inspired aspects include lightweight centre-lock alloy wheels, a wider body and track over the normal Evora, and a race-car-like interior with carbon fibre Recaro bucket seats. Overall weight has also been reduced by 105kg.

Lotus originally had plans to put just 25 versions of the Lotus Evora GTE road car onto the market, and only in China. Due to overwhelming demand, the company is now expanding upon the initial designation. Lotus CEO Dany Bahar recently said,

“The response to this model in China has been so incredible, within days we had sold out with 114 orders. In response we decided that the only logical step from a business perspective was to increase production and widen our reach.”

The Lotus Evora GTE road car is being planned to go on sale in European markets now as well. It is unconfirmed but unlikely the GTE will make its way to Australia shores. However, we’ll keep you posted. Dany Bahar also said,

It’s a shame Australia will miss out as it sounds like it’s going to be an absolute stunner of a car.