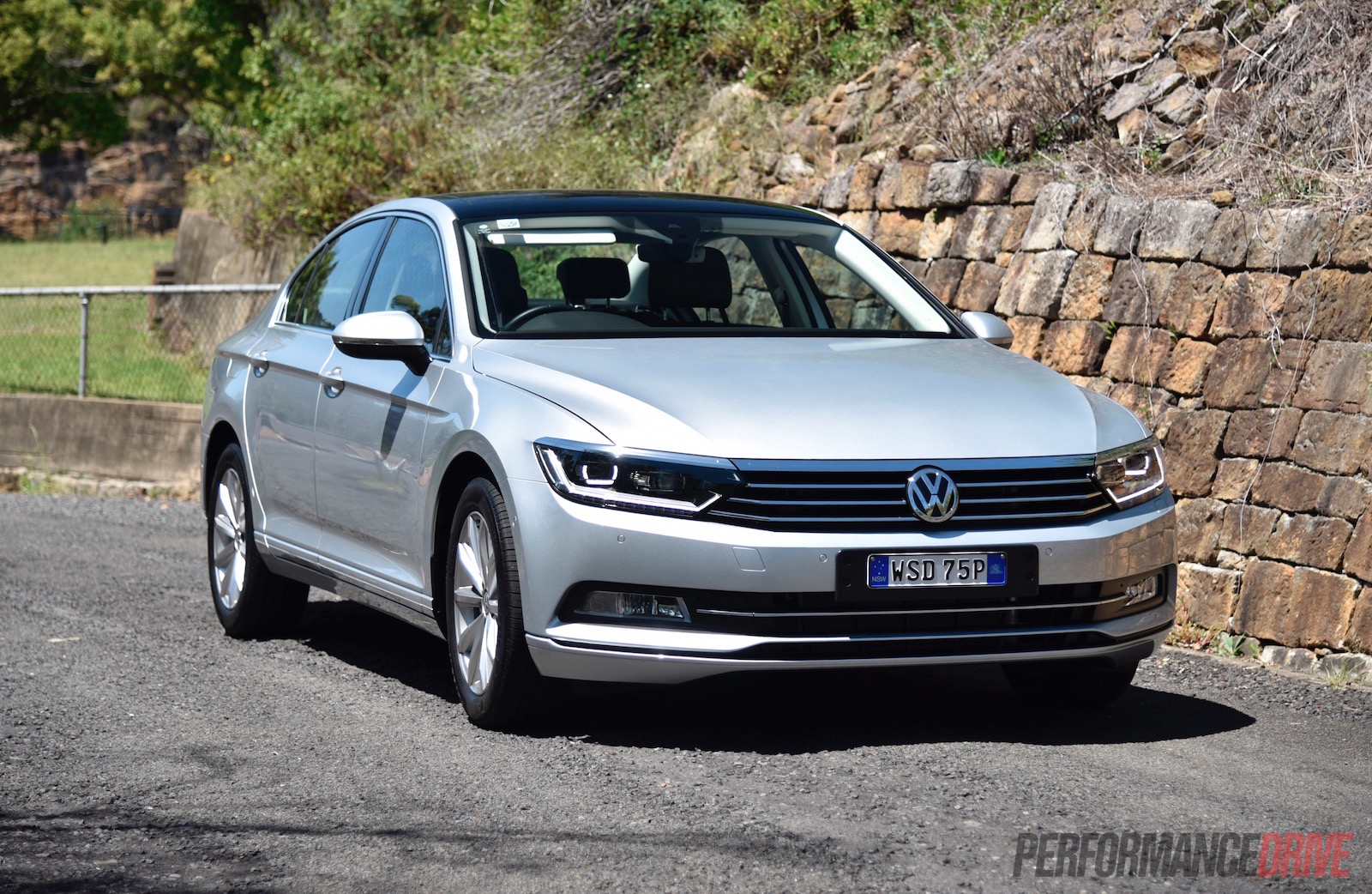 The 2016 Volkswagen Passat enters an automotive market that has shown clear signs in past months that Australians are moving away from sedans in favour of hatches, and both large and small SUVs. This places more pressure than ever on VW’s flagship sedan. 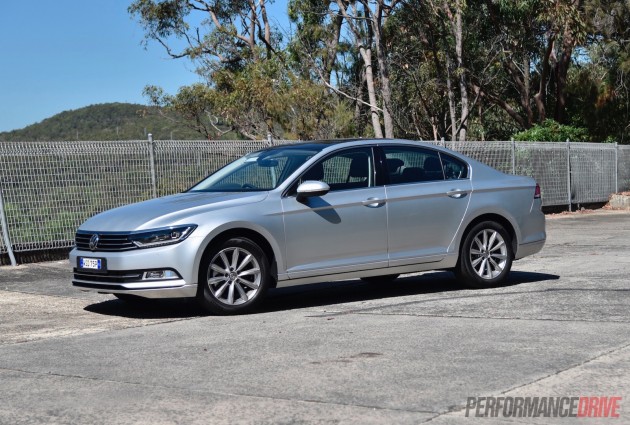 The new eight-generation ‘B8’ Passat range kicks off at $34,990 for the 132TSI, which comes with a 1.8-litre TSI turbo-petrol four-cylinder, seven-speed DSG dual-clutch auto transmission (no manual option), 17-inch alloys, satellite navigation, three-zone climate control, and collision avoidance braking technology, all as standard. This is the best value Passat to hit the market.

Our car tested here, the 132TSI Comfortline, gets the same powertrain but adds some clever safety features and some luxurious touches. Priced at $39,990, it comes standard with leather upholstery, upgrades from a 6.5-inch to an 8.0-inch touch-screen, city emergency-braking (CEB), lane assist, and adaptive cruise control.

The flagship 140TDI Highline receives a more powerful and torquey powertrain, as well as more premium styling cues, interior upgrades, and 18-inch alloys. Prices for the Highline start at $45,990. Each variant is available in sedan and wagon format, with the wagon adding a $2000 premium. 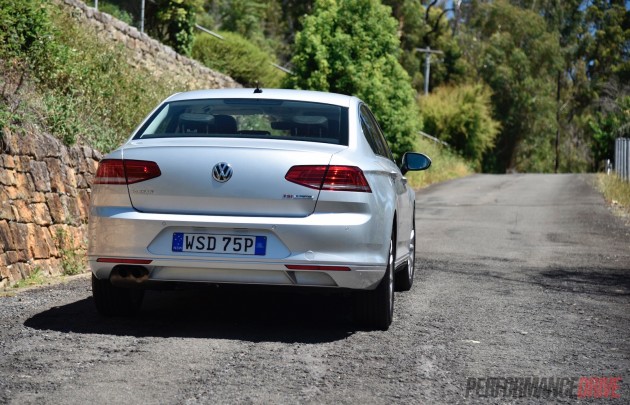 Aesthetically speaking, the Passat casts a familiar yet more modern profile thanks to minor changes to the front grille and headlights. The Passat is now longer than ever before, with Volkswagen extending the wheelbase of the MQB platform, shared with the Golf.

The bonnet features two distinct muscular lines, and there’s a two-tone finish thanks to the optional sunroof. The freshly-designed LED headlamps add to the premium visuals, but the tail end is a stark contrast and lacks the sophistication of the front. It appears rather featureless and dull. Overall, the Passat looks distinctly European.

The $750 optional metallic finish, while unnecessary for some, gifts a prestige aesthetic that accentuates the body’s sophisticated lines.

Step inside and you’re treated to comfortable leather ‘Ergocomfort’ seats, ample headroom and a spacious, largely black interior. While the Passat shares a considerable amount of components and switchgear from cheaper models like the Golf, this takes nothing away from the quality of everything presented. 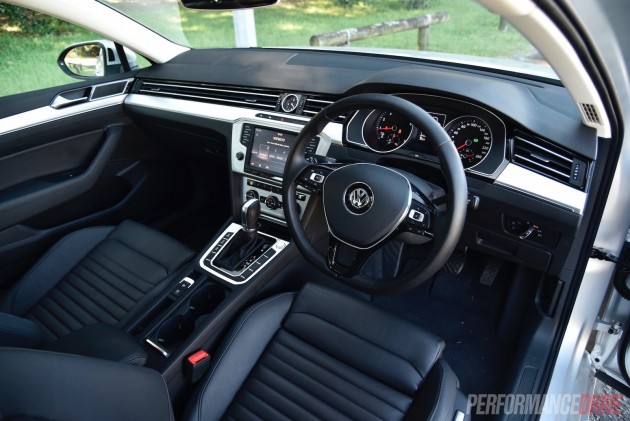 The 8.0-inch infotainment system with Apple CarPlay and Android Auto connectivity is surrounded by chrome, which makes its way down from the centre console to break up the gloss and flat black finished interior.

The ambience in the cabin is a testament to Volkswagen’s designers, especially at night. There’s a narrow LED pinstripe on each door sill that reaches to the rear of the cabin. It doesn’t overpower the cabin’s atmosphere, instead adding a premium feel.

Opting for the Comfortline model gets you driver assist equipment as standard, setting you back $1800 in the base model. Volkswagen’s clever adaptive cruise control, automatic emergency braking (up to 65km/h), rear traffic alert (which works up to 50 meters), blind-spot monitoring and lane-keeping assistance are all included. The lane keeping assistance works eerily well on clearly marked lanes, and will even navigate you through a bend. It’s no autonomous measure though – an alert will sound if you get a bit silly and do the old ‘look mum, no hands’ trick, and will completely disengage if you continue to muck around.

The optional $3500 “Luxury Package”, as fitted here, includes LED headlights, a panoramic electric glass sunroof, ambient interior lighting and electric foldable side mirrors. Ticking this option does provide some quality benefits, but the Passat is no less of a car in the absence of these features.

Practically speaking, the Passat is capable of taking five adults and their luggage on a long journey thanks to the spacious rear of the cabin, and 586 litres of boot space. Thanks to folding rear seats, the boot capacity grows to 1152 litres. 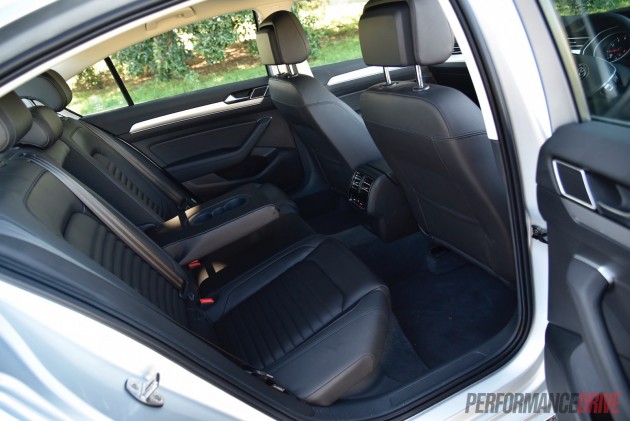 Volkswagen’s upgraded 1.8-turbocharged TSI engine is now more powerful, yet more efficient, with a 14kW upgrade from its predecessor, now producing 132kW and the same 250Nm of torque. This delectable powertrain is mated to an equally appetising DSG auto transmission, driving the front wheels. There’s also an “Extended” differential lock that works with the stability control system to eliminate inside wheel wheelspin.

Power is delivered as a smooth surge up through the rev range with no evident turbo-lag and almost unnoticeable shift times thanks to the DSG. Regardless of its relatively low power output, the Passat recorded 0-100km/h times quicker than some of its competitors, largely thanks to the transmission and direct power delivery. We timed 0-100km/h in 7.98 seconds, easily bettering the 180kW Kia Optima GT‘s time of 8.56 seconds that we tested last week, for example.

Volkswagen offers the driver four different driving modes to play with, including Eco, Normal, and Sport, and a customisable Individual setting. Switch into Sport and the throttle response livens up noticeably, while flicking to Eco mode helps to conserve fuel by reducing throttle response and alleviating loads demanded by the air-conditioning system.

The Passat does an admirable job of piloting its way through the bends, largely thanks to quality 215/55 R17 Pirelli rubber front and rear, as well as a clever electronic differential lock (XDL) that will partially brake the inside wheel to help pivot you around a corner. The XDL system works in the background and only the more experienced of you will notice it at all. This trickery may turn some purists off, however, the trade off is exceptional front-end traction and longitudinal grip under power. 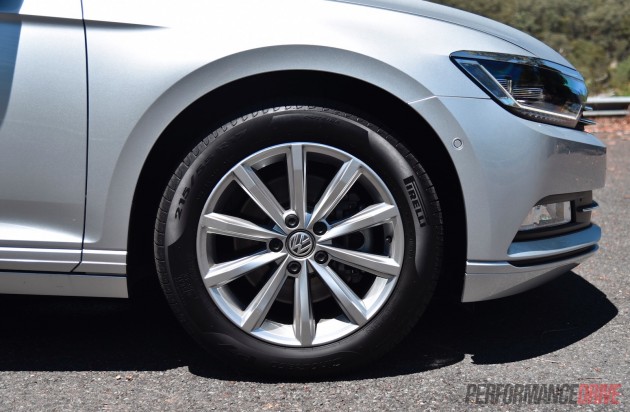 Two benefits of the long wheelbase are that it translates into a spacious cabin, and a chassis that feels more composed and stable compared with its twitchier Golf counterpart. Balanced is probably the most accurate word to describe the Passat, providing an entertaining drive without intimidating the driver.

The rear of the car squirms a little under heavy braking, but it will sort itself out with no real stress transmitted through to the driver. The steering is electronically assisted, and feels it, with an eerily light-weight setting and marginal feedback. A lot of steering input is needed, with 2.75 turns lock-to-lock, which is actually a welcomed surprise as it makes you more engaged with the machine. Progressive steering is optional with the R-Line package – a first for the Passat – taking turns down to 2.1. Body roll is minimal thanks to the stiff chassis construction and firm suspension. The only downside to this is compromised comfort around town when compared with some of its rivals, German, Japanese and Korean.

Around the city on an urban run is where the Passat really shines. Switch the driving mode into Normal or Eco and the throttle response is toned down, even becoming a little doughey. This is all in the name of economy though, and the Passat is exactly that thanks to its stop/start system and regenerative braking technology.

While we weren’t able to match the ADR figure of 6.0L/100km on the combined cycle, we were still happy with the 6.2L/100km readout after a variety of driving conditions. There’s a BlueTec function within the infotainment system that allows you to monitor consumption, and it rewards you with a blue light when driving economically.

The only real negative to the driving experience of the Passat, in our opinion, is the DSG’s behaviour in specific slow-speed conditions. You’ll experience some lurching when you take your foot off the brake pedal while in Drive as the slack is taken up and the twin clutches grab. When stationary on an incline, the car can roll back significantly in the time between taking your foot off brake and putting it onto the throttle. This can prove frustrating, even frightening for new drivers. With time you can familiarise yourself with the way the DSG works and adjust your driving style slightly to avoid any surprises. On the flip side of the coin, the DSG performs flawlessly when driven with enthusiasm, responding in an instant to manual shifting prompts, up and down the gears. 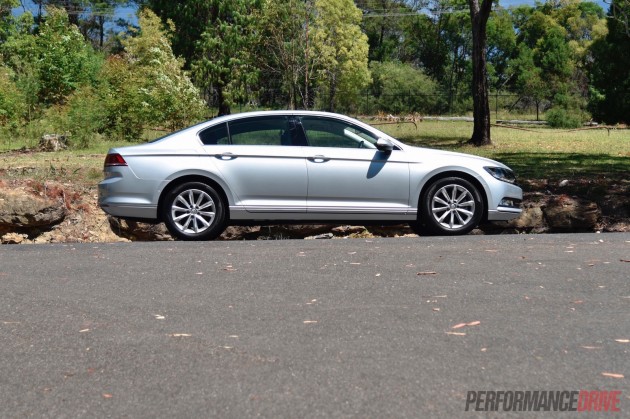 When you consider that some of the Passat’s more premium domestic rivals are asking as much as $20,000 extra, the Passat starts to look genuinely appealing. However, when you match the Passat up against some of its similarly-priced and equally well-equipped Japanese and Korean rivals, the decision to go German becomes much tougher.

It’s a real shame that a lot of the buying public will walk straight past the Passat and opt for a high-riding compact SUV instead. At this price point at least, there aren’t many that come close to the quality, efficiency, and value of the new Volkswagen Passat.

PROS:
– Impressive power & performance for a 1.8T
– German quality inside and out
– Interior aesthetics
– Smart and clean design
– Fuel efficient