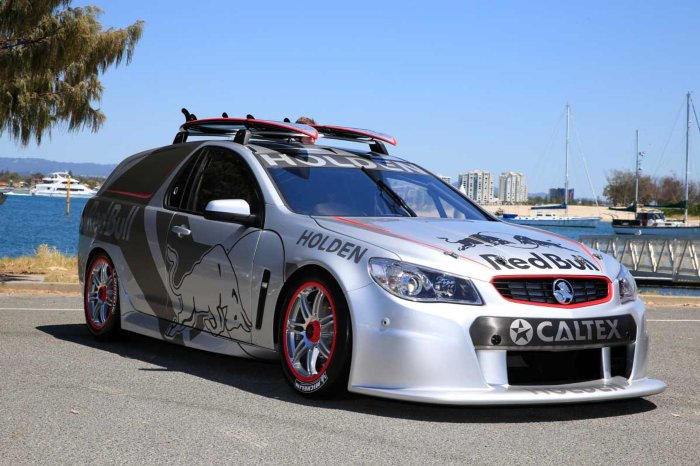 Red Bull Racing Australia has today unveiled what it calls the Tribute Edition Sandman loosely based on the Holden VF Commodore. It’s built to celebrate the surfing culture in Australia and the 40th anniversary of the famous Holden panelvan. 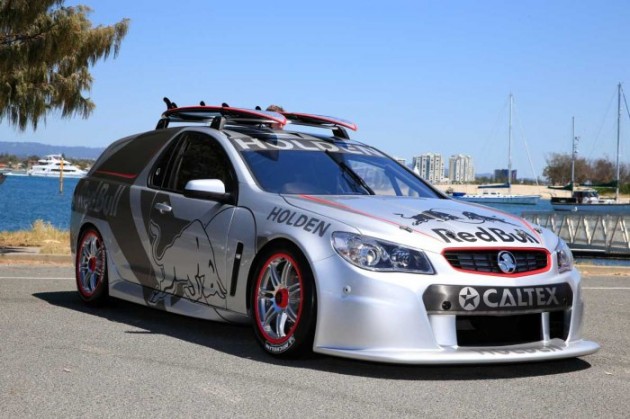 Red Bull’s own Jamie Whincup and Craig Lowndes pulled the covers off the car ahead of this weekend’s Gold Coast 600. Both drivers will take time out of their busy schedules to pilot the one-off build, taking guests and various VIPs for hot laps around the concrete-clad circuit.

Jamie Whincup commented that “the heart and soul of the car is a V8 Supercar”, only this gets a 650hp (485kW) V8, a full roll cage, V8 Supercar-spec brakes, and not one but two race seats so passengers can tag along.

Sitting on the roof are two surfboards, reminiscent of the trophies on offer to drivers who make it onto the podium this weekend. The panelvan has also been given a lick of silver paint and Red Bull and Holden livery.

The project began in April 2014 and was a joint collaboration between Holden’s design department and Red Bull Racing. Other unique features include a six-speed electro-hydraulic paddle-shift gearbox – a transmission that’s never been used in a V8 Supercar before  – and a special Formula One-style fly-by-wire throttle.

“The Holden Sandman was launched 40 years ago, the same year that I was born! It sounds like a race car, it’s faster than our race cars in a straight line with the big banger engine and the cool thing is if you come to the race this weekend, you’ll see it running around the track.”

The icon is back. This is the all-new 2022 Jeep Grand Cherokee. It showcases a freshened up exterior design, huge...