A video teaser of the Lamborghini Huracan GT3 has been released, showing the track-only Italian supercar undergoing initial stages of development at the ‘Piero Taruffi’ circuit in Rome, Italy. 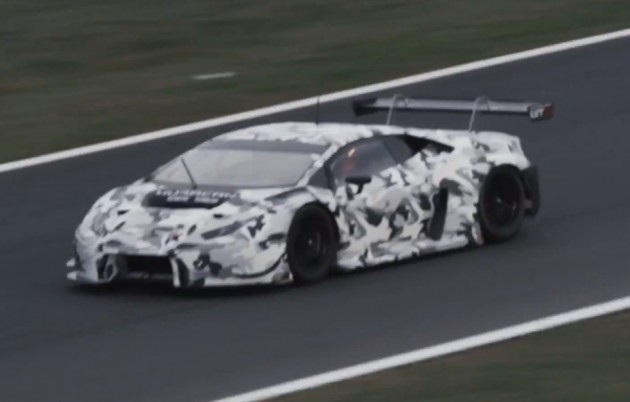 Under the watchful eye of Lamborghini’s Giorgio Sanna, Lamborghini Squadra Corse test drivers Adrian Zaugg and Fabio Babini set up the GT3 race car for the first time to cut a few noisy laps in a prototype.

The Gallardo GT3 FL2’s successor is likely to use a similar version of the 5.2-litre V10 found in the road-based Huracan, with power expected to remain around the car’s factory output of 449kW. What we can anticipate is that the GT3 will be much lighter and sport an essentials-only race car cabin.

The Huracan GT3 has been designed and developed to comply with GT3 specifications, and is set to race in events such as the 24 Hours of Spa and the Blancpain Endurance Series next year. Giorgio Sanna said,

“I’m pretty much satisfied with this first test of the new Huracan GT3. We still have plenty of work to do to be ready for the upcoming season, but performance and reliability feedback is encouraging. I have no doubt that this car will more than hold its own in international GT3 competitions.”

It was only back in August we saw Lamborghini unveil the Huracan LP 620-2 Super Trofeo, featuring a stripped out body, aggressive aerodynamic additions, and a revised, more powerful engine.

If you’re a fan of V10 race cars like us, you’ll watch the video below over and over just to soak up the sound. At some stage down the track let’s hope we see one punching down Conrod Straight at one of the many endurance events that cater for GT3-specific race cars.

Prices for the Australian-delivered road-going Lamborghini Huracan start from $428,000.