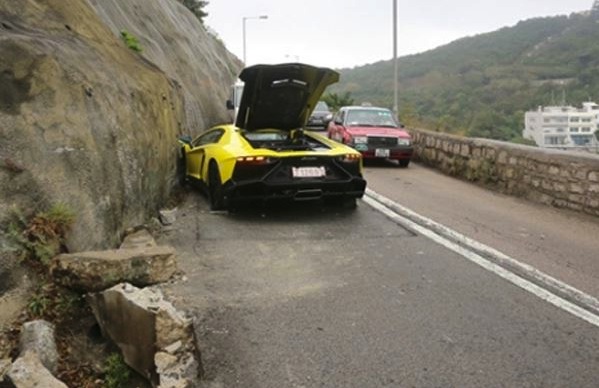 A Lamborghini Aventador in Hong Kong has had a fight with a solid rock cliff face, and lost, predictably. To make us all cringe even harder the poor Aventador in question was a 50th Anniversario edition.

It’s reported the driver was taking it for a test drive at the time. Judging by the fact the passenger seat is still wearing its protective plastic and the fact there is a temporary number plate hanging from the car, it does seem very likely.

The exact cause of the accident is yet to be determined. It looks like the driver may have come through the tight section of road a touch too hot, miscalculating the proximity of the wall.

It doesn’t appear as though the driver, or any passengers, would have been seriously hurt. As for the poor Lambo, it’ll need a new face and possibly some front suspension and or steering components. Oh, and some new airbags.

Just 200 of these special editions went into production. We’re sure the owner or car dealer is infuriated.