Can you believe 1000 lucky motorists out there are driving around in a brand new Lamborghini Aventador? The company recently announced a production milestone of 1000, with the 1000th edition being personally delivered to its new owner by Lamborghini CEO Stephen Winkelmann.

The lucky buyer was a German architect, Hans Scheidecker, who ordered the V12 supercar in the bright and vibrant Argos Orange colour. 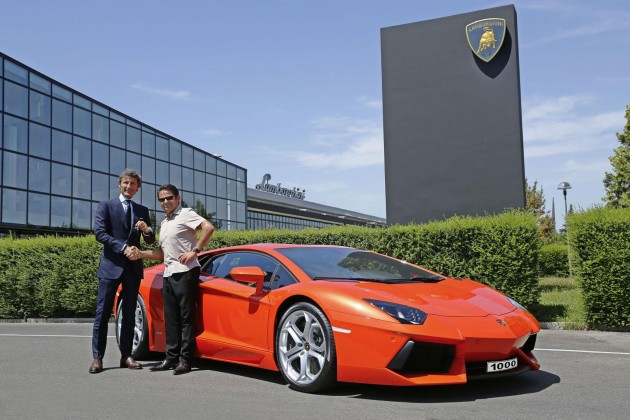 It only took Lamborghini one year and three months to achieve 1000 sales, which is not bad considering this is a very expensive and exclusive vehicle. So impressive that the company has had to increase production capacity, going from three per day up to 4.5 a day.

In comparison, Lamborghini took two years and five month to reach 1000 with the Aventador’s predecessor, the Murcielago. The Mucielago was built at the same facility in Sant’ Agata, Bologna, Italy.

To refresh your memory, the Aventador features a new 6.5-litre V12 engine – not based on a previous engine – producing 515kW of power and 690Nm of torque.

Power is sent through a Independent Shifting Rod seven-speed sequential transmission and into all four wheels. Acceleration from 0-100km/h takes just 2.9 seconds while its top speed is a whopping 350km/h.

Well done, Lamborghini. The milestone proves supercars are not dying, despite the economic and environmental pressures.