It’s a bird. It’s a plan. No, wait, it’s a Kia Optima Hybrid. Kia has released an interesting teaser image of a ‘Superman’ special edition it has created in conjunction with DC Entertainment. The car will debut at the Chicago Auto Show next month. 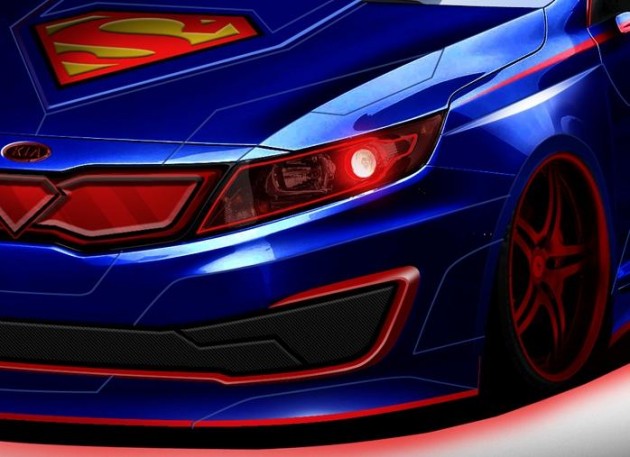 Kia and DC Entertainment have created the one-off special to help support the We Can Be Heroes fund which assists families that have been affected by drought and famine in the Horn of Africa.

Little has been revealed on the car at this stage, in terms of specifications and special features. However, you can clearly see the Superman-themed highlights, such as the emblem on the ‘chest’ of the bonnet.

There also appears to be a set of red deep-dish alloy wheels and a filled in red front grille section. The front bumper bar looks significantly more aggressive than the standard item too, hinting towards a full custom bodykit.

Based on the Kia Optima Hybrid (US model), the Superman car is likely to be powered by the same 2.4-litre petrol engine, matched with the same Atkison Cycle hybrid system as the standard car. Overall power is rated at 154kW and 265Nm.

Full details will be revealed at the 2013 Chicago Auto Show in the US, starting February 7.