Lamborghini fans in Miami had the chance to witness the full potential of the new Lamborghini Aventador Roadster on Monday, when five examples hit the international runway for some high speed runs. 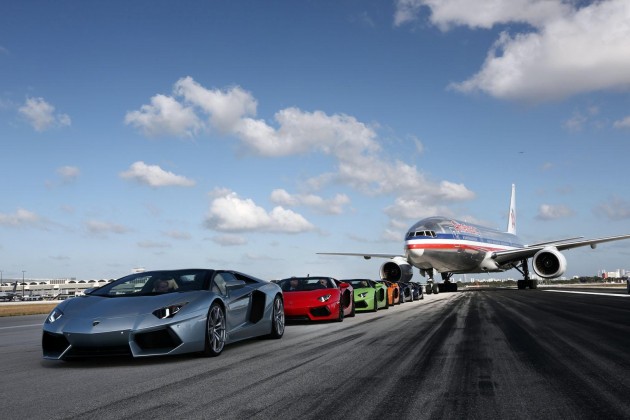 Organised by Lamborghini and company CEO Stephan Winkelmann, the airfield was partially closed off by the Federal Aviation Administration to let the supercars run.

According to Lamborghini, no flights were delayed during the event due to the integrated flight planning by Miami-Dade and the FAA. Winkelmann said,

“It has been a great pleasure to work with the Miami-Dade Aviation Department and South Beach teams on today’s amazing demonstrations. I have never seen something similar at a Lamborghini event.

“The Aventador Roadster is our most exciting production car ever and I can think of no better place to celebrate its launch than here in Miami.”

The cars, which feature a 6.5-litre V12 producing 515kW, were able to hit 338km/h during the sprints, which easily surpasses the speed of a 747 jet taking off (around 290km/h). Click play below for a neat video showcase of the event.