What better way to utilise your nice new Jaguar XF Sportbrake than by towing a special Jaguar Speedboat with it. Yes, the British marque has come up with a prestigious Concept Speedboat blending in with the company’s quintessentially suave British character. 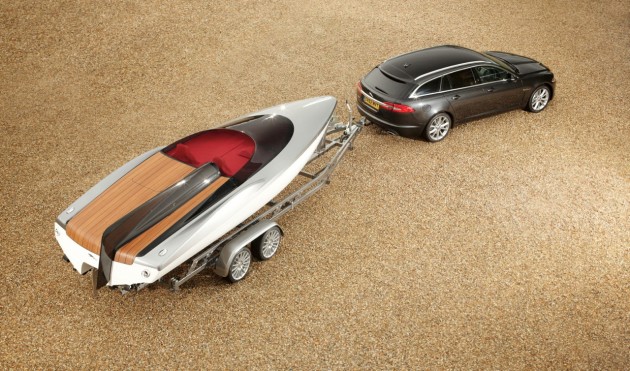 The stunning 20-foot rig (6.1 metres) features a gel coat fibreglass hull with natural teak decking up top. Sitting just off centre is a carbon fibre fin which has been modelled on the old Jaguar D-Type. There’s also fuel filled caps that are inspired by the ones used on the Series 1 XJ.

Other highlights include a premium 2 plus 1 seating layout, a super-sleek windscreen design that wraps all the way around and down to the rear of the hull, and an exquisite polished aluminium propeller. 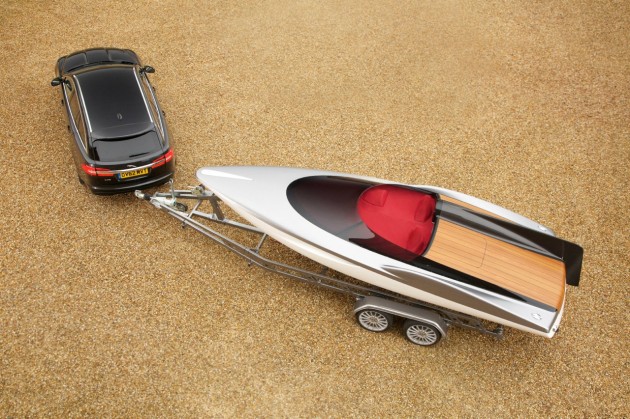 The concept has been created to bolster the launch of the new XF Sportbrake, which is set to go on sale in Australia next year. Ian Callum, the man behind the concept and Jaguar’s director of design, recently spoke about the character behind the boat. He said,

“We recognise that both our existing and future customers enjoy diverse and active lifestyles. With the launch of the new Jaguar XF Sportbrake, we had an opportunity to create a vision of how our design philosophy might be applied to an alternative product, in which speed and beauty are also priorities.

“The Concept Speedboat looks powerful. It follows, in so many ways, the idea of a traditional speedboat but with the sleek and fast characteristics that you would expect from a Jaguar car.”

Jaguar says it has no plans to produce any more examples, or launch the speedboat onto the market any time soon. It would be the perfect toy to go with the new XF though wouldn’t it? The neighbours would think you’ve turned into James Bond.