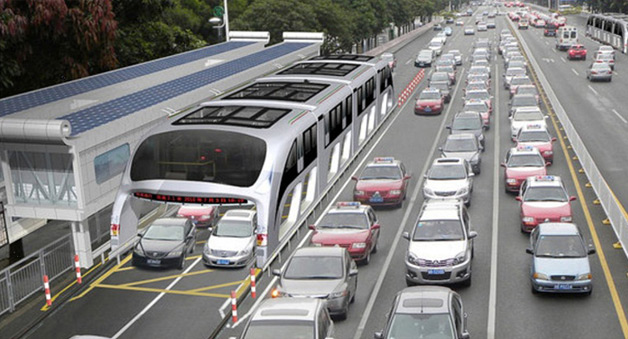 An innovative solution to China’s nightmarish congestion has been devised by Beijing-based Transit Explore Bus. Introducing the Land Airbus concept.

The Land Airbus is envisaged as a new form of transport which allows cars to drive underneath it while accommodating up to 1400 people. With a top speed of 60km/h, it becomes a veritable moving tunnel without obstructing traffic.

The passenger compartment is high-up above traffic, while the whole thing is two lanes wide. Only rudimentary rails are required to keep the Land Airbus stable.

One Land Airbus is said to be able to replace up to 40 buses, saving up to 800 tonnes of fuel a year. It is expected to run on AC electricity from the city infrastructure. This novel idea has drawn plenty of interest from several Chinese cities.

It represents a more immediate and affordable solution than Elon Musk’s Hyperloop, which is more of a long distance proposition.

The only disadvantage is with a 2.1-metre height restriction, large buses are unable to fit underneath. But since these generally avoid dense Chinese urban areas anyhow, this would not be an insurmountable problem.

A working prototype is expected to come in August. Check out the video below to see how it works.