This RENNtech Mercedes-Benz SLR McLaren has been labelled as the fastest SLR in the world. So we thought we’d better take a bit of a look into it. It’s built by four tuners; RENNtech, Mansory, Platinum Motorsport, MACarbon and Exotics Boutique. 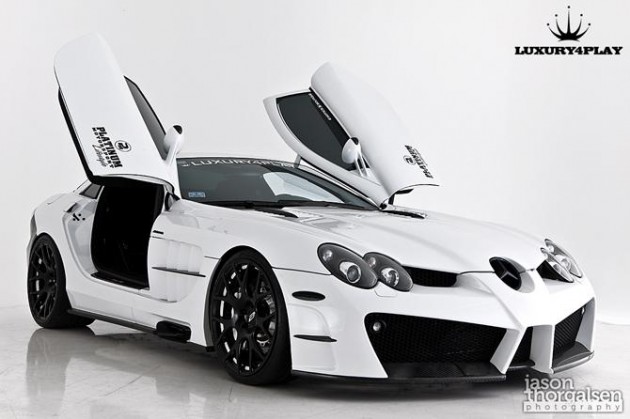 By ‘world’s fastest’ they mean the world’s quickest and fastest Mercedes-Benz SLR McLaren, specifically, on the quarter mile. With a best pass of 10.29 seconds at 217km/h, you can’t hardly argue with ‘them’.

The RENNtech Mercedes-Benz SLR McLaren obviously has some serious engine work, boosting power levels from the standard 5.4-litre supercharged V8. In standard form the engine develops 460kW of power and 760Nm of torque.

After RENNtech has finished with it, by fitting a modified supercharger and retuning the ECU, the V8 now develops a bone-compressing 574kW of power (770hp). Torque is rated at 810Nm at the wheels.

To make sure the all the powertrain hardware can cope with the extra grunt, RENNtech has recalibrated the five-speed automatic transmission. A coilover suspension kit, also from RENNtech, is fitted to keep it all straight and true.

Click play on the video below to see this thing rip down the quarter mile in just 10.29 seconds (we assume both the white and black examples pictured are the same tune). The RENNtech Mercedes-Benz SLR will also be on display at the 2011 SEMA Show next week.