We’ve already seen the styling of the Infiniti Emerg-E concept in leaked images. Now Infiniti has revealed the full specifications and details at the 2012 Geneva Motor Show. A production version of the stunning coupe may be set for the showrooms in the future. 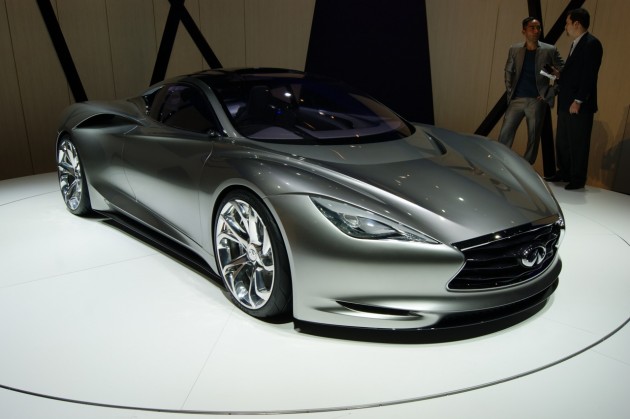 The Infiniti Emerg-E concept is a beautiful new showcase by the Japanese company. It’s also the company’s first-ever two-seater, first mid-engined, and its first range-extending vehicle.

The Emerg-E is also a look into the future, giving us a preview of what to expect from Infinti in the next few years, in terms of design and technical character.

It was formed under the company’s latest design language, offering a very sleek and low-profile shape, with panel cuts and sweeping contours from all angles – a perfect rival to the upcoming Honda NSX?

It looks like a fully fledged supercar, however, power doesn’t come from a screaming V12 engine. Instead, an intelligent range-extending hybrid system lies beneath. Don’t think for a moment that it isn’t quick though. 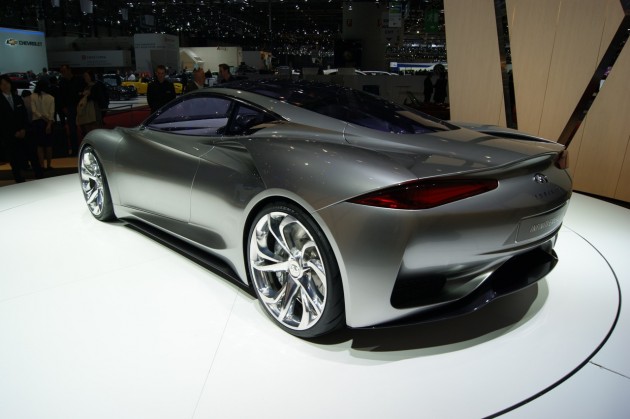 It’s propelled by two electric motors, receiving power from a lithium ion battery pack. It can drive up to 50km on electric power alone. When there’s no juice left, a range-extending 1.2-litre combustion engine kicks in to generate charge. With the range-extending engine engaged, total range is stretched to 483km.

As for the performance, the Infiniti Emerg-E concept has a combined power output of 335kW, made up of two electric motors developing 150kW each, and 35kW coming from the 1.2-litre engine. The potential of the system translates to 0-100km/h (0-60mph) in 4.0 seconds. Meanwhile the average fuel consumption figure is said to be around 2.3L/100km.

It all sounds quite dandy. The best part is Nissan – Infinti’s parent company – is said to be considering a production version. If the concept is well received at Geneva, and the public shows keen interest, company executives may give it the green light a bit further down the track.

The company has also said that it is looking for a ‘halo mode’ to join its lineup, one that could really boost sales in regions such as Europe. The Emerg-E is being earmarked as a possible candidate for that job. Fingers crossed.

Infiniti will launch in Australia during the second-half of this year.