Just one week after he crashed heavily out of the Belgian Grand Prix, McLaren driver Lewis Hamilton has won the 2012 Italian F1 Grand Prix at Monza. The British driver lead from flag to flag and held off a fast finishing Sergio Perez in the Sauber. 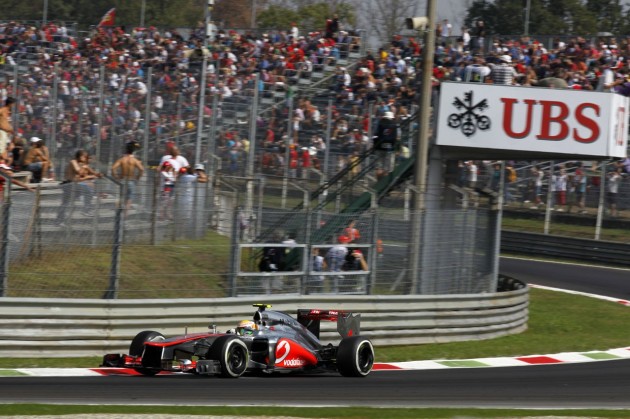 Ferrari driver Fernando Alonso – who was also involved in the crash the previous weekend at Spa – got an extra help in his championship campaign by finishing third. His teammate Felipe Massa went one better than his fifth place in Belgium to prove his return to form.

McLaren were looking certain for a 1-2 result before Jenson Button’s car came to a halt on lap 34 while in second place.

Red Bull Racing had one of it’s worst race weekends in a long time. Aussie Mark Webber drove smartly for much of the race to get up into the top five after starting from 11th, and even dropping as low as 14th after a terrible start. But the Aussie – on a one stop strategy – had an oversteer spin coming out of a chicane.

Somehow he kept the car from hitting a wall, but a busted tyre saw him drop out of the points. His world champion teammate Sebastian Vettel didn’t have a day to write home about either, after serving a drive-through penalty earlier for forcing Alonso onto the grass, the German stopped his car with just five laps to go with engine problems.

The next race on the F1 calendar is the Singapore Grand Prix on September 21-23.