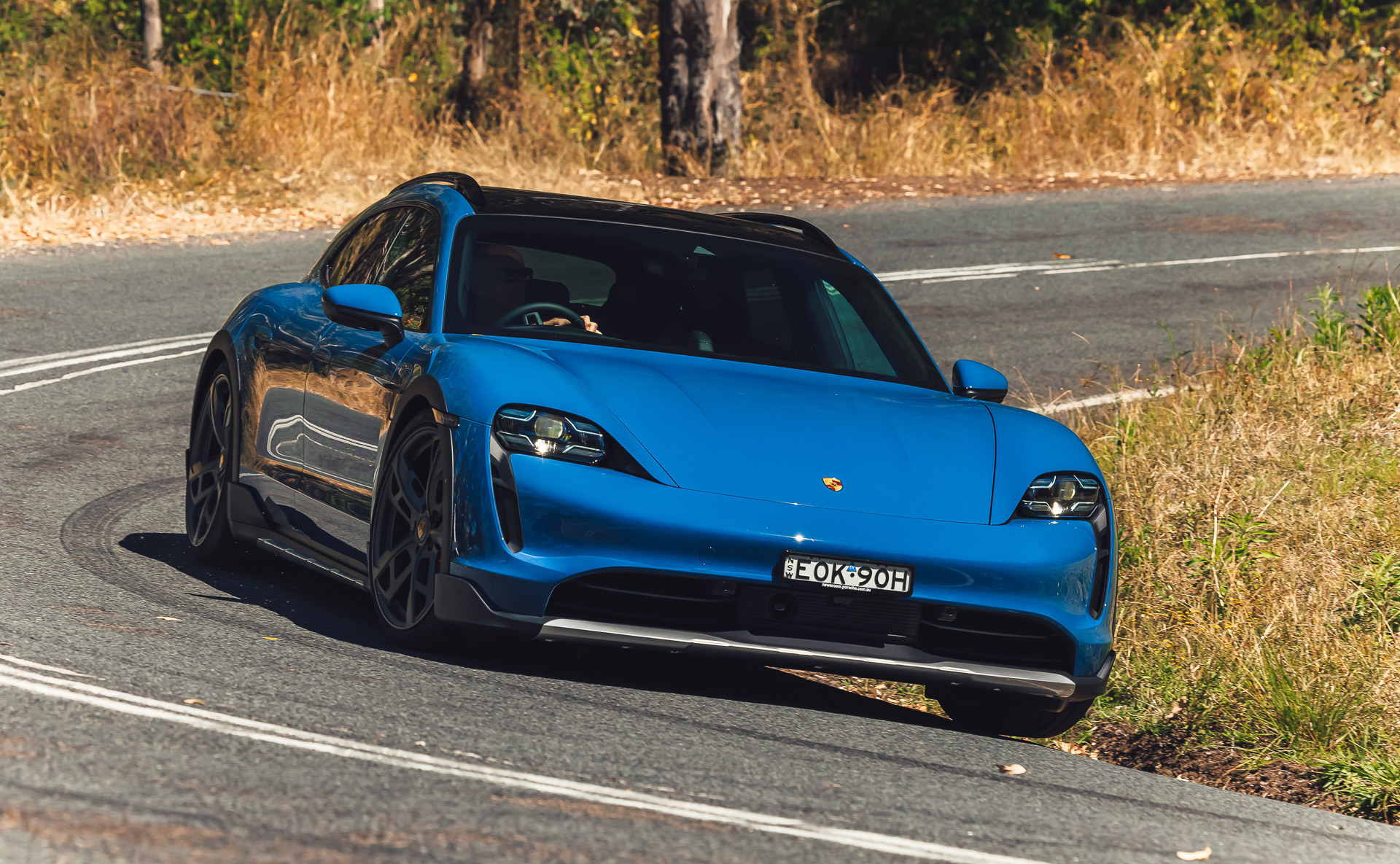 In an automotive world that’s fast-becoming electrified, it is good to see driving enthusiasts are not being left in the dark. As the 2022 Porsche Taycan Cross Turismo sets out to prove. 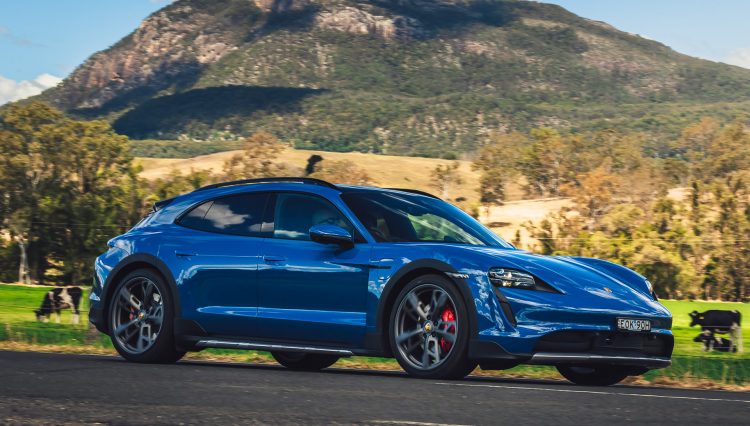 It’s an SUV… kind of; a practical wagon, driver’s car, a forward-thinking eco-conscious electric vehicle, and high-performance sports car all rolled into one. Buyers have three main variant levels to choose from in Australia, spanning from the Taycan 4, the 4S and the Turbo. These badges will be familiar to Porsche fans and owners, but to everyone else the flagship Turbo variant could send some confusing signals – spoiler alert, there is no turbocharger. Prices range from $176,600, $205,300, to $279,000 (excluding on-roads).

We had a chance to sample the 4S version during the Australian launch of the new entry Taycan RWD sedan last week (review coming March 31), including giving it a proper test drive up in the hills outside Noosa. And, frankly, it is difficult to think of a more complete package that covers off all of those aforementioned categories. The great all-rounder? 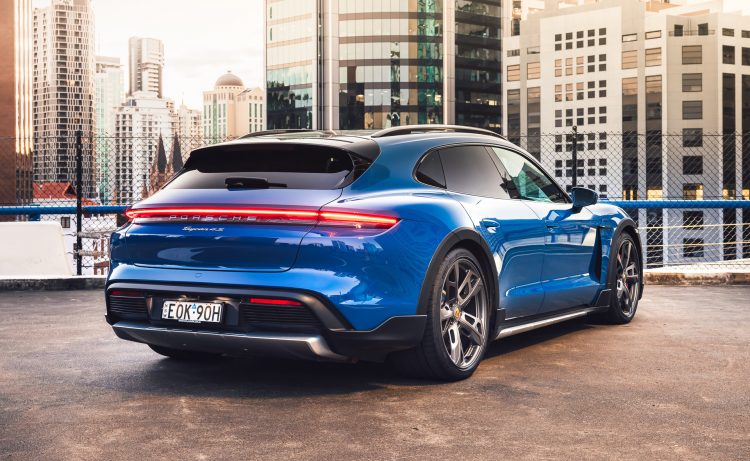 The Taycan Cross Turismo is a slightly raised wagon variant of the Taycan. You get 146mm of ground clearance, up from 127mm in the 4S sedan – there’s also an optional Off-Road Design pack that adds another 10mm. All variants are fully electric, featuring a motor at the front and a motor at the rear, providing four-wheel drive. The 4S is the intermediate trim level, equipped with some performance-inspired appointments while offering superb acceleration for an electric car. Or, you could say brutal acceleration if compared to a petrol/diesel vehicle.

Porsche offers its ‘Performance Battery Plus’ pack as standard with the 4S, which offers 93.4kWh of capacity. The 800-volt system supports charging at up to 270kW and when full, offers a WLTP range of between 388-452km, depending on the conditions and modes engaged and options fitted. That’s a reasonable range but far from what you could expect from a full tank in a like-minded petrol model.

For a quick example, the Panamera 4 Sport Turismo (4S not currently available) and its 243kW 2.9 twin-turbo V6 offers a theoretical average range of 773km, based on an official consumption of 9.7L/100km and 75L fuel tank. But here’s the catch, that Panamera does 0-100km/h in a claimed 5.3 seconds whereas this electric wagon does the sprint in a claimed 4.1 seconds. And this is considerably cheaper to ‘fill’ up. 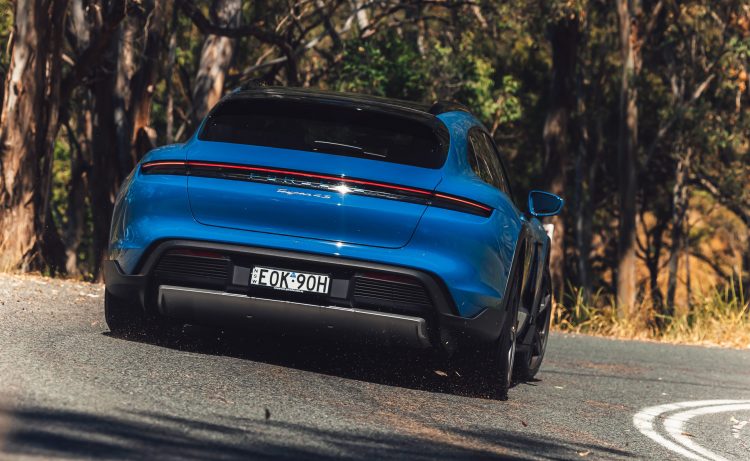 Yep, this is only a 4S and it conquers the common acceleration benchmark in just 4.1 seconds. That’s seriously quick for a big wagon. It does this thanks to two electric motors that combine to develop 360kW. Actually, that’s wrong. During overboost (full throttle) Porsche says you get 420kW. Massive grunt, in other words. Not far off the company’s legendary and premier model, the 911 Turbo (427kW). Porsche also claims 0-200km/h in just 13.0 seconds and the quarter mile in 12.2 seconds.

Out on the road it’s the response that impresses most. Electric vehicles offer an instant reaction to your throttle inputs. And the Taycan is fine-tuned so it feels like a traditional sports car. The throttle pedal feels natural and yet endless. If you want more, push it more and it goes. Like, really goes. This is one of the easiest cars to truly surprise passengers and other motorists. It is giggly-fun rolling off at the traffic lights against another motorist who seems intent on being a racing car driver. Because in this you just lean on it and they’re gone. Behind you. Bye.

There’s no doubt about the wagon’s speed and power, that’s for sure. Interestingly, all of the power is channelled through an unusual all-wheel drive system. You see, the front motor is a direct-drive with a single gear ratio but at the back the seperate electric motor is mated to a two-speed transmission. 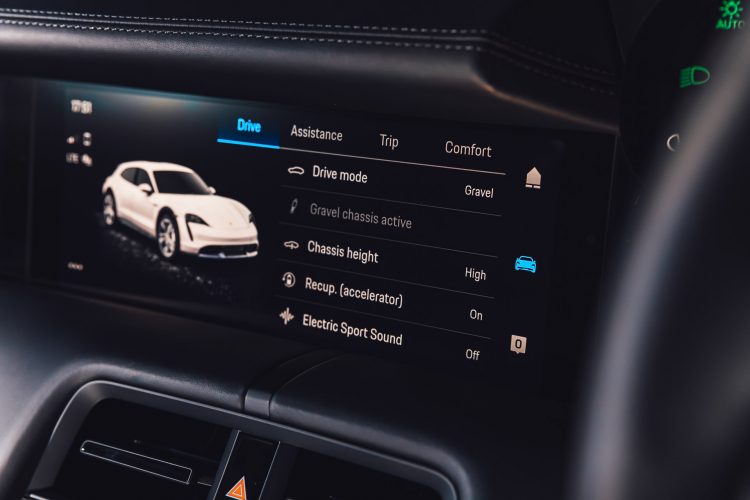 How this works exactly is beyond us and beyond our brains’ capacity – why doesn’t the rear try to overtake the front when it goes into second gear? You needn’t get too boggled by it all because, from behind the wheel, it just feels like the car, overall, has a two-speed gearbox. You can hear it change up at about 60km/h, and you can just feel it. During deceleration you can, feel it more so, clunk down the gear back into first. Especially under higher-tempo demands.

There are some driving modes to choose from but to be honest the default mode does everything you need. The throttle is not too snappy and the steering offers the ideal balance between weighted sportiness and gliding comfort. It feels like a Porsche. Turning is a joy. When pushed hard the car feels like it’s already there before you even decided to turn. It knows what’s going on.

On some pretty ordinary back roads with potholes and whatnot, the Sport mode does help because it tightens up the standard air suspension. This means it braces itself against harsher compressions and resolves quicker. But it also means the throttle response is sharpened up. There’s also a Gravel mode which maximises the car’s off-road capabilities. 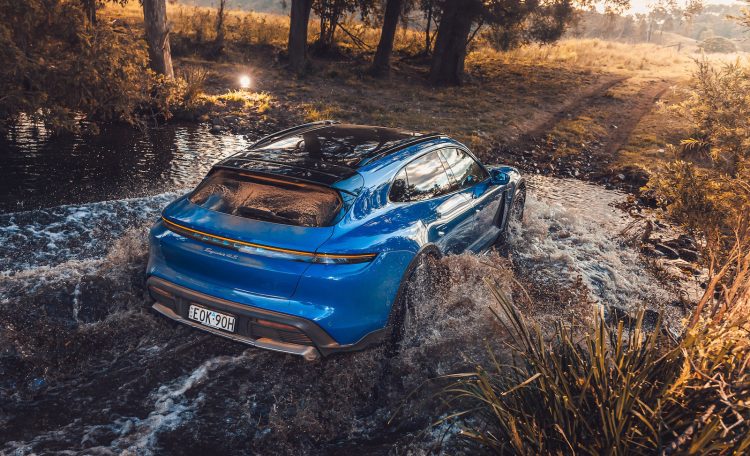 The ride quality from this air suspension system is just insane. We experienced it a few months ago in the Taycan Turbo and walked away completely bewildered and amazed. How can a ride control setup be so compliant on ordinary roads yet so sturdy and precise? Well, the Cross Turismo is perhaps even better because you have a bit more ground clearance and thus more compression range. That’s great for everyday driving on everyday roads. On a track, obviously, a lower and flatter setup is going to be more favourable. But this is a practical crossover.

Speaking of which, the Taycan Cross Turismo offers up to 1212 litres of boot space. It’s not as much as a big SUV. A traditional, upright SUV. But it is enough to support a decent grand touring trip. It’s also plenty for daily errands and shopping. In the standard two-row seat configuration you have a decent 446L to utilise. 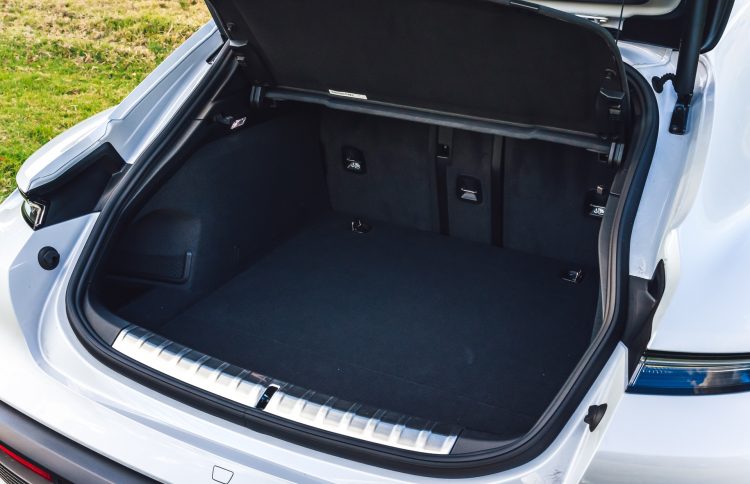 So how about elsewhere in the cabin? It is a rather sparse layout when the ignition is off. That’s because most of the controls are hidden within touch-screens, including a large portrait-style screen on the lower dash fascia and another wide-screen up above. They all offer crisp graphics but perhaps lack a bit in animation and theatre. Some of the menus also lead you to an odd dead-end.

The 4S comes with a Bose surround system as standard, as well as four-zone climate control, front seat heating/cooling, and a surround-view parking camera system. The driving position is perfect and passenger space is intimate but accommodating.

As usual with Porsches, the build quality and fit and finish inside is impeccable. Every fixture is tightly-fit into its place and almost every surface is coated in or made from a strong yet refined material. There are some hard plastics used in the lower, high-traffic areas for protection against wear and tear. In essence though, it does feel like a $200k vehicle in here. 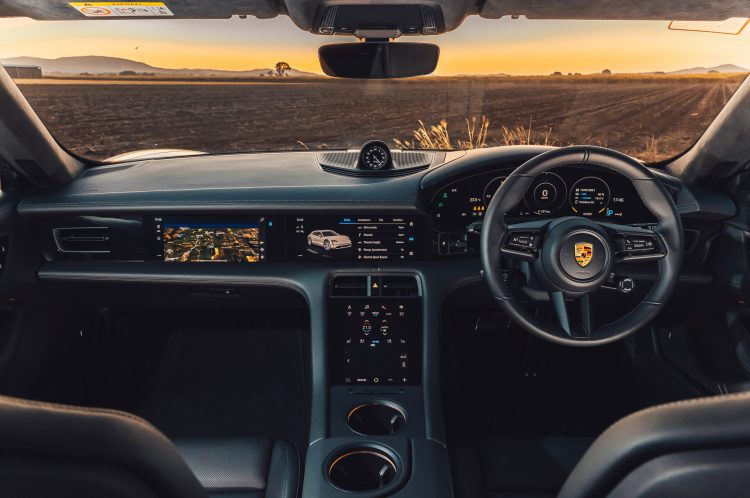 Porsche’s new Taycan Cross Turismo leapfrogs its way to the front of the segment in our eyes. It manages to pull off esteemed credibility and expertise in a number of crossover-esque areas, including driving dynamics in varied conditions, outright performance, on-road refinement, and all while housing accessible and user-friendly cutting-edge technology, inside and out. It is the new-age upper-premium all-rounder.