Some may remember the impounded Ferrari Enzo in Dubai from a report last year. More news has come through providing a bit more insight on the poor supercar. 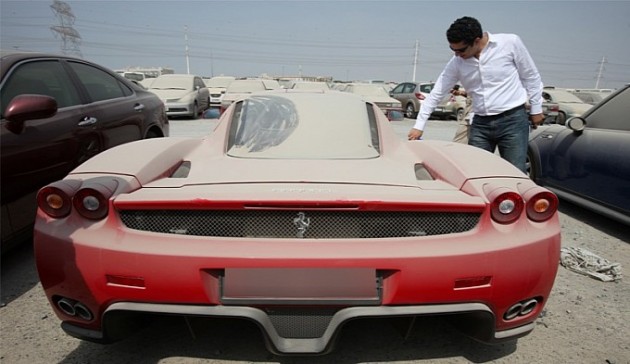 It seems the Ferrari Enzo was seized under a major international investigation which included the theft of many other expensive and luxury vehicles. Due to the investigation, none of the vehicles can be sold off.

So the Ferrari Enzo is just sitting in the sun, weathering away. According to Khalid Al Kamali, a Dubai police captain, many would-be buyers have inquired about the cars. He recently said,

“We have received many calls from traders – Britons, Americans, Russians and Indians want to buy the Ferrari Enzo, worth about a $1 million, after a report published by Emirates 24|7 on luxury cars seized at the General Directorate of Traffic in Dubai.”

Unfortunately, it looks like the Enzo will remain sun baking for some time yet. Surely the local government could lease the vehicle out or something, it just seems like such a waste. Only 399 Ferrari Enzos were ever made for crying out loud.