Like last year, Hyundai is planning to have a big presence at the SEMA Show in Las Vegas later this year. The company is planning to unveil a special ‘Yellowcake’ Veloster Turbo, and has released a preview sketch to prove it. 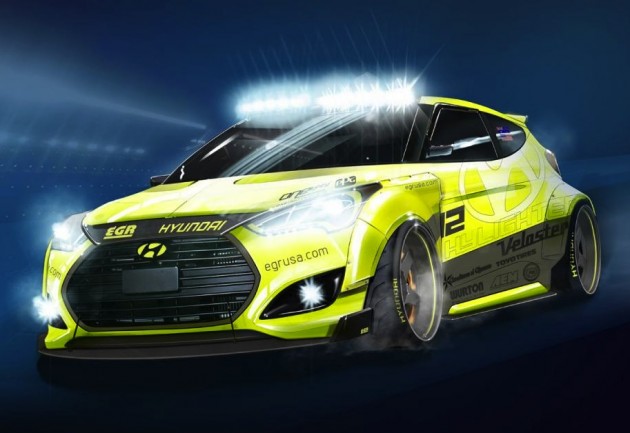 The one-off project car will be built by EGR Group, featuring a consistent time attack night racing theme throughout. EGR Group provides the wide body bodykit and pumped wheel arches to give the Veloster a very muscular look straight out of the bag.

To ensure the go matches the show, engine modifications are part of the plan, with the help of a Bisimoto engine tune, AEM intake system and a Magnaflow exhaust for easier breathing. Output will be take from the standard 150kW rating out to around 186kW.

As for the night theme, there’s a set of rally lights mounted on the roof with LEDs shining bright to increase night vision.

Other highlights include ARK coilover suspension, beefy Brembo brakes, and an AEM strut brace for the front end. It all rides on a set of DPE lightweight alloy wheels.

This, and many other crazy and creative show cars will be revealed at SEMA, running from November 5-8