Here’s something different. It’s the 2005 Ford Mustang ‘Vanquishd’ show car with an Aston Martin V12 engine under the bonnet, and it’s now for sale. ‘Vanquishd’ was on display at the 2006 SEMA Show, after Western Motorsports completed the conversion. 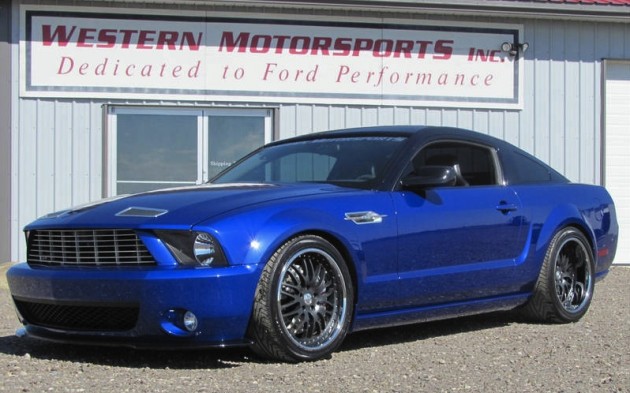 Yes, it’s a very uncommon conversion but Western Motorsports, renowned Ford specialist, took it on and didn’t look back. It features the awesome 5.9-litre V12 Aston Martin Vanquish engine – also seen in the Aston Martin DB9, Aston Martin Rapide and Aston Martin Vantage V12. In standard Vanquish form it churns out around 335kW (450hp), although the seller says 600hp for this example.

Changes to the engine include new 6-2-1 headers with a Magnaflow three-inch exhaust system. The mighty Aston Martin V12 engine is also backed up by a six-speed Tremec T-56 manual transmission, sending power to the rear wheels, of course.

It also comes with upgraded Baer Extreme 14-inch brake rotors and six-piston calipers, hiding behind 19-inch iForged alloys wrapped in 275/35 front and 345/30 rear Michelin Pilot Sport tyres. These are pressed onto the road by a KW Suspension coilover suspension kit on all four.

It’s a very unique and quite stunning Mustang example. The seller’s asking price is US$79,900. It’s currently for sale on Kijiji classifieds in Canada. Imagine turning up to a Mustang meet and revving the engine, it would certainly astonish most onlookers.